The traditional Catholic sanctuary has been reimagined as an intimate, communal space suited to modern spiritual needs in a church designed by the Budapest-based Robert Gutowski Architects. The Saint Pope John Paul II Church in Paty, Hungary has traded the conventional cross-shaped floor plan for a crescent outline that forms a giant ellipse when combined with an outdoor courtyard. The interior chapel is a simplistic white-washed enclosure that highlights the most sacred parts of worship. 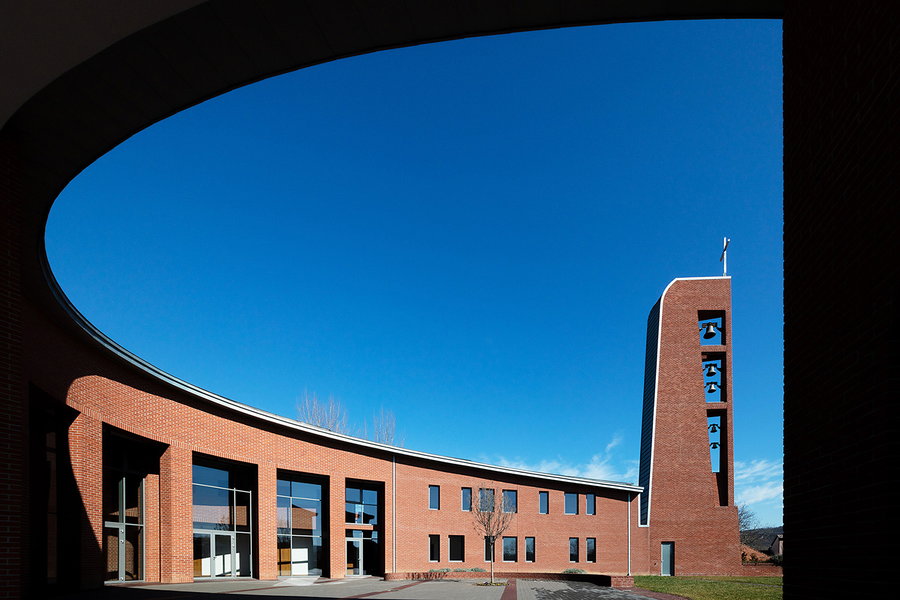 In a traditional cathedral, the altar where the Eucharist is performed is situated at the very top of the cross layout or apse, with a pulpit, lectern, and raised seating separating the congregation from the rituals. With this new layout, the church seeks to engage worshippers by allowing them to encompass the altar, instead of simply observing the “holy act” from afar. 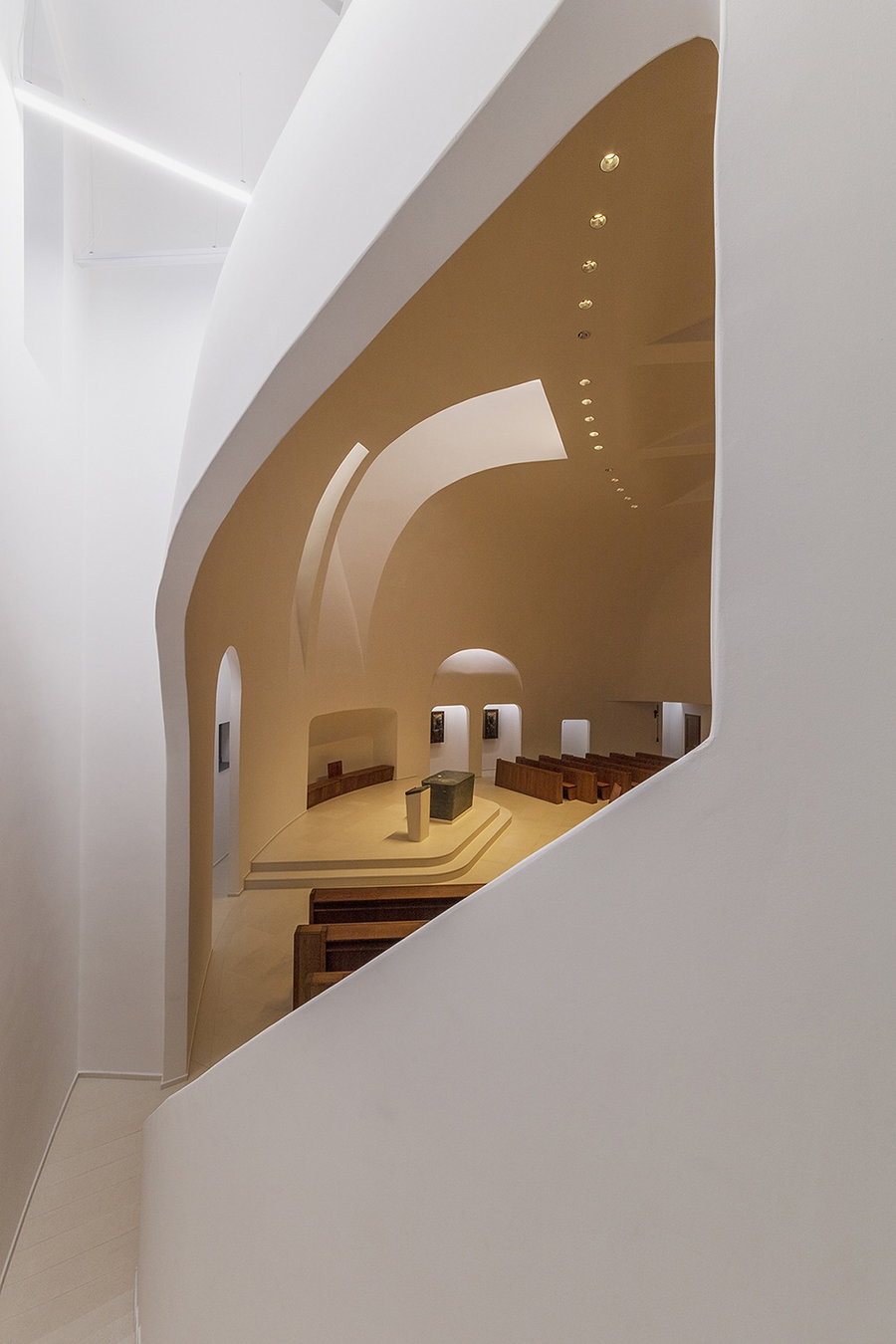 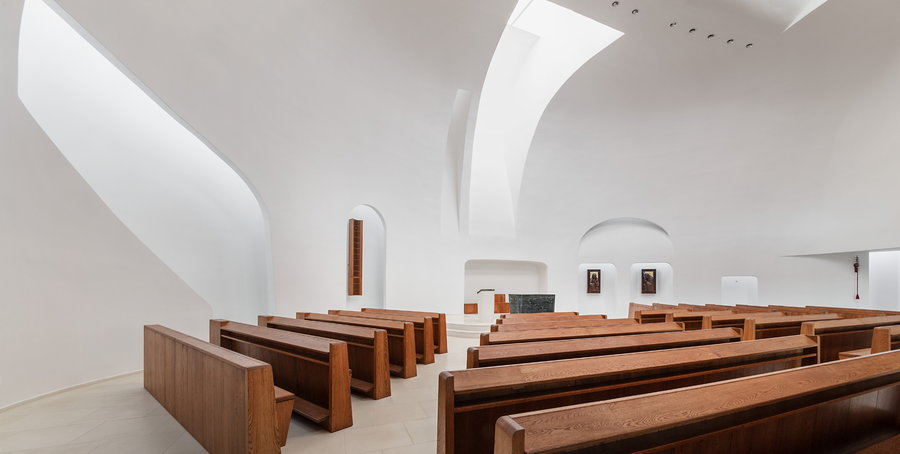 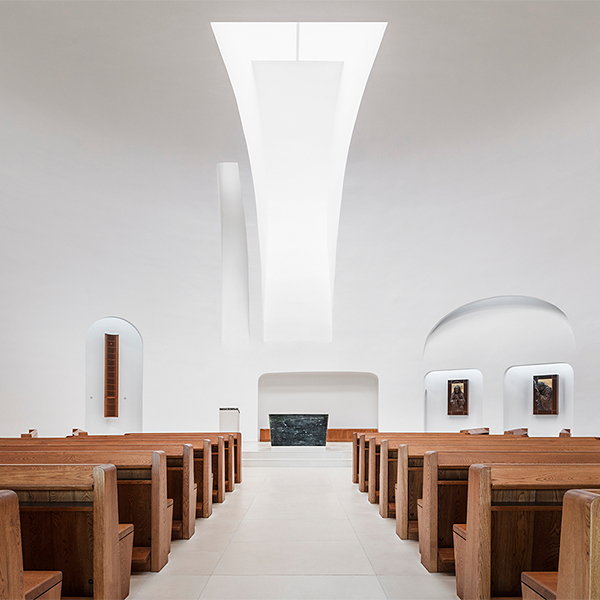 “We invite people into the apse, surrounding the altar, forming a community,” says lead designer Robert Gutowski. “It is also similar to the liturgy of early times, when Paleochristians simply surrounded a table in their own home — what is known as Domus Ecclesiae.”

“The church clearly defines its purpose: while the Creator and the almighty God are at the center of traditional liturgy, modern liturgical efforts have shifted emphasis to the re-creator God, the image of a perpetually redeeming Christ,” he adds. 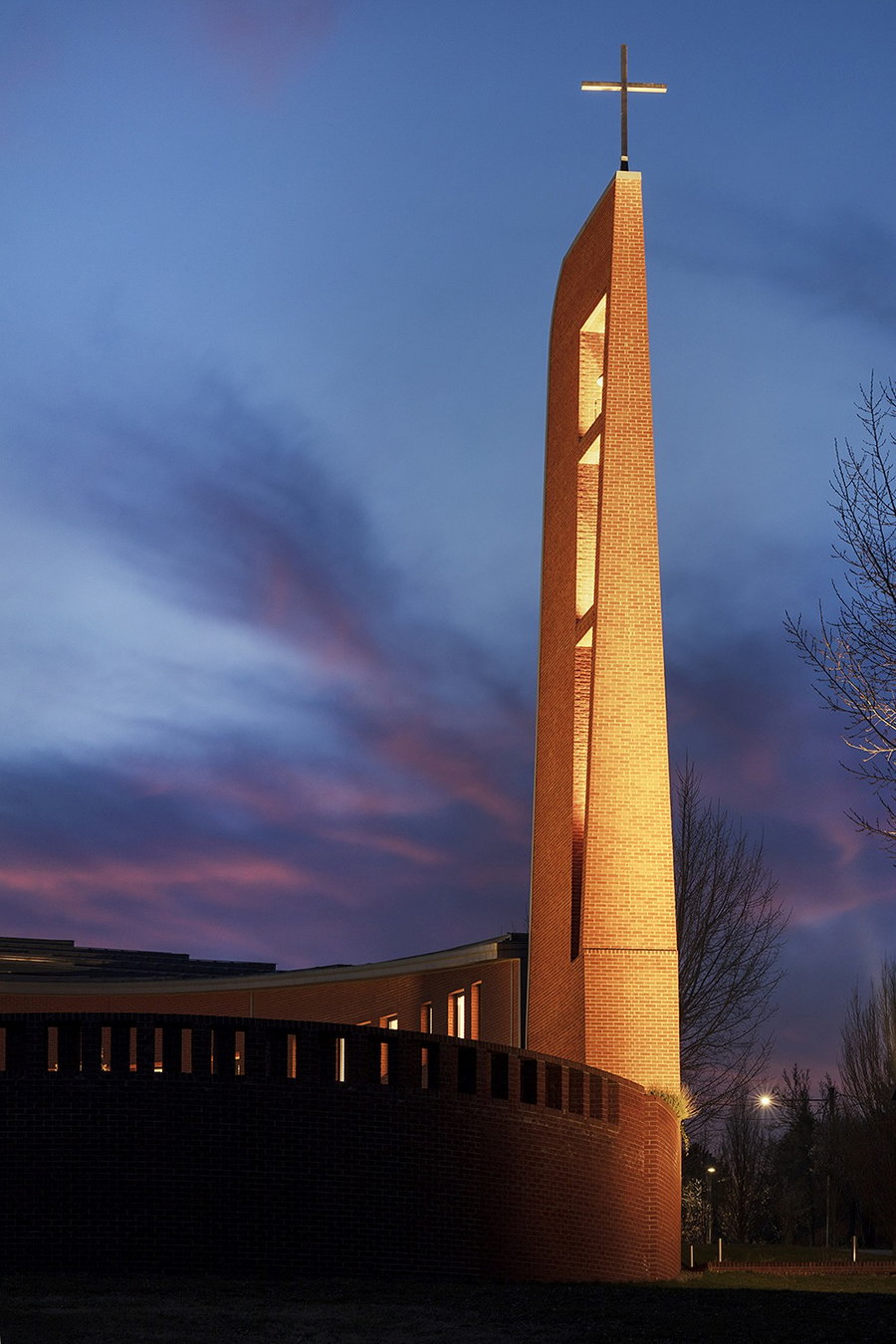 The architecture of the edifice is all symbolic of that updated religious perspective. The oval shape of the building and courtyard represent “perpetuity,” incorporating both the eternal nature of divinity and the constant need for fellowship with Christ and his followers. However, the two ellipses fashioned by the church and connected courtyard are set on different axes. This ties in a traditional compositional detail found in most Catholic churches, in that the nave — the area where the congregation sits — is typically slightly offset from the apse.

“We cannot name one single church that sits on the same axis, because pretty much all of the historical churches in Europe have this tiny ‘mistake,’ which actually became a symbol of the broken body of Christ,” explains Gutowski. The inside of the new house of worship also applies this “broken body” symbolism by making every alcove asymmetrical, and by angling the reinforced concrete ceiling at unconventional slants. 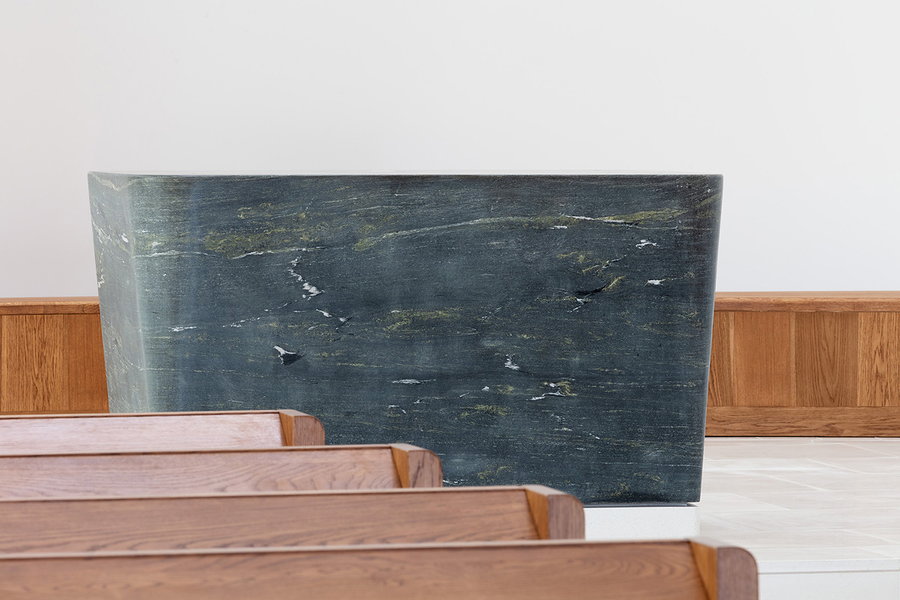 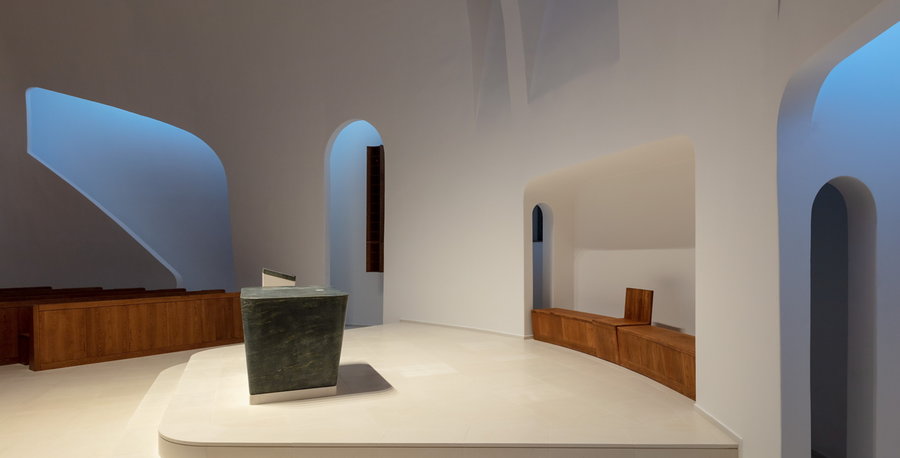 The altar is made of one single wedge of dark green onyx stone, creating a striking contrast to the white walls and Carrara marble of the altar platform. The two steps of the platform are rounded, too, adding to the altar’s feeling of approachability. The modest wooden pews constitute a semi-circle around this space while a rectangular skylight brings in natural light from above. On top of that, the altar and alcoves are illuminated by spotlights for added emphasis. 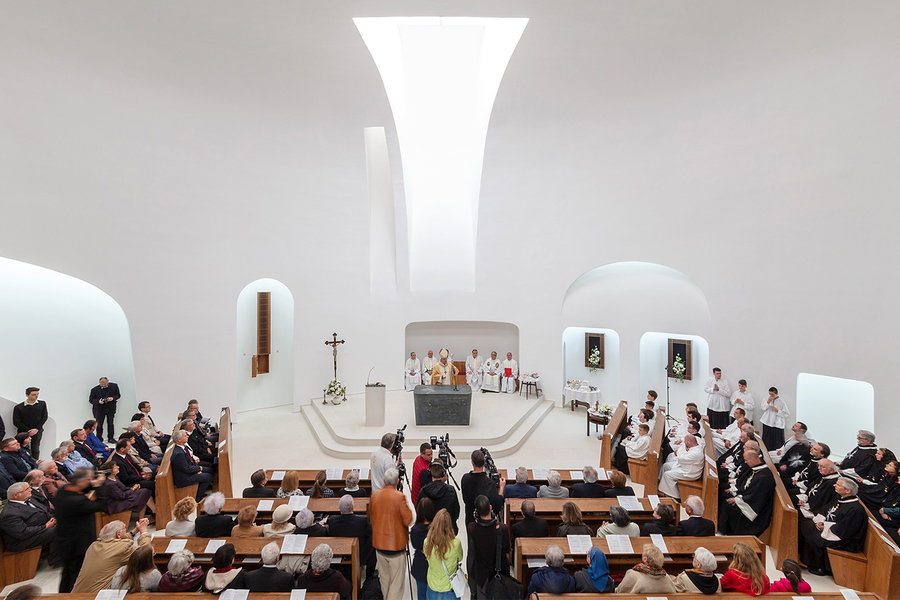 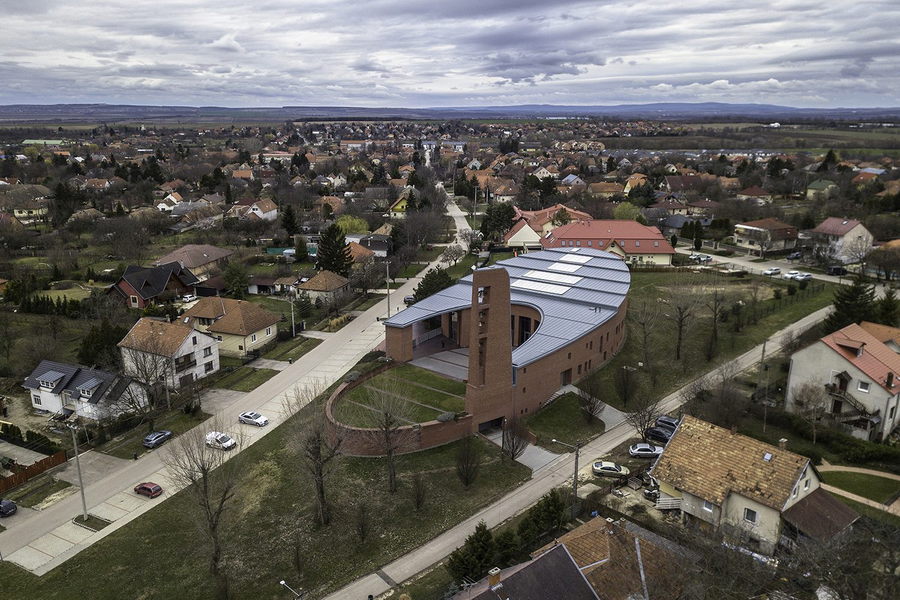 The Gutowski architecture firm won the bid for the Paty project in a 2004 design contest. The structure was completed and consecrated in April 2019. According to its website, the company focuses on “complex and significant cultural buildings, high performance sustainability, and community renewal projects.” It has produced over 50 projects in its 16-year history, including a gymnasium and concert hall in Pannonhalma, an UNESCO World Heritage Site, and the Korda Pilgrim House in Mariazell, Austria.