They may look like alien spaceships perched at the edge of China’s Yangtze River, but these structures by MAD Architects were inspired by something decidedly mundane: the enormous steel gantry cranes used to lift heavy loads out of ships at ports. The firm’s bold vision for the Chongqing Cuntan International Cruise Center is the winner of an international competition to design a new cruise ship terminal in the city’s Cuntan Port area. In addition to its 160,000 square feet of terminal, the facility will include over 500,000 square feet of commercial space. 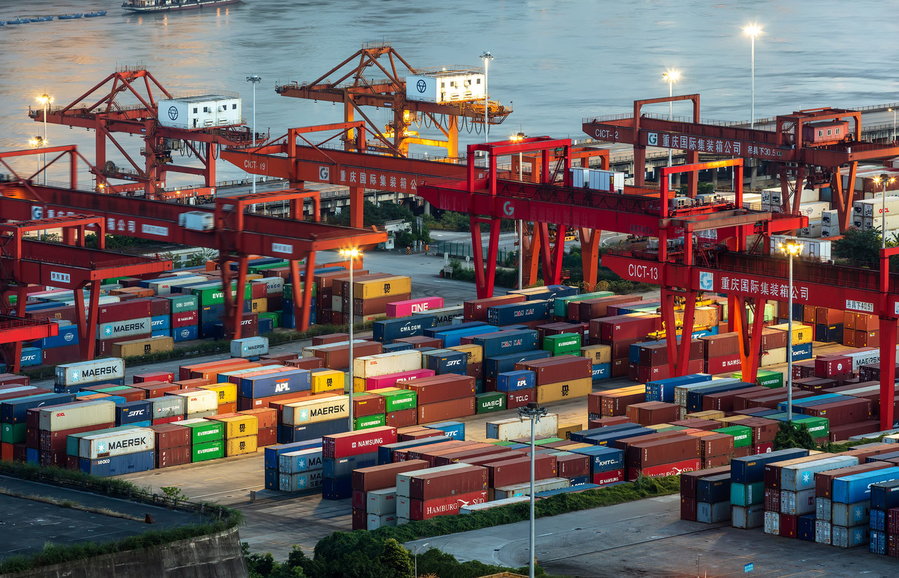 During their first visits to the site, the architects were struck by the look of the large orange gantry cranes, which reminded them of “living alien creatures with a sense of surrealism.” That led them to a vivid color scheme and a sci-fi-flavored vision for elevated buildings that feel like a futuristic, free-walking city, “seemingly arriving here from elsewhere, and perhaps traveling elsewhere once again someday,” says lead architect Ma Yansong. 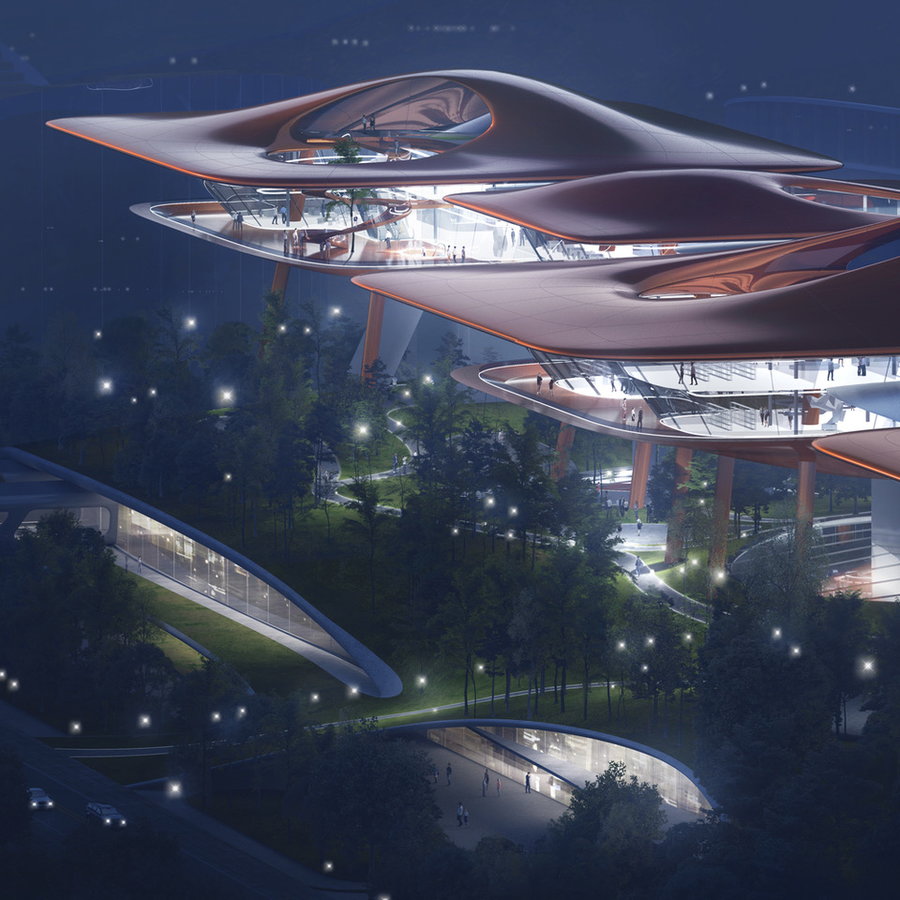 Working with the China Academy of Building Research (CASR), MAD Architects plans to transform the current cargo terminal in Chongqing’s Liangjiang New Area into a new city complex and tourist attraction. The most visually striking part is called the Yangtze River Skywalk, a 1400-foot-long complex made up of six separate but interconnected buildings that seem to rise and fall in an organic line when viewed from a distance. This mimics the rhythm of the industrial freight terminal cranes in both form and color, while their elevated positions preserve open views of the river. 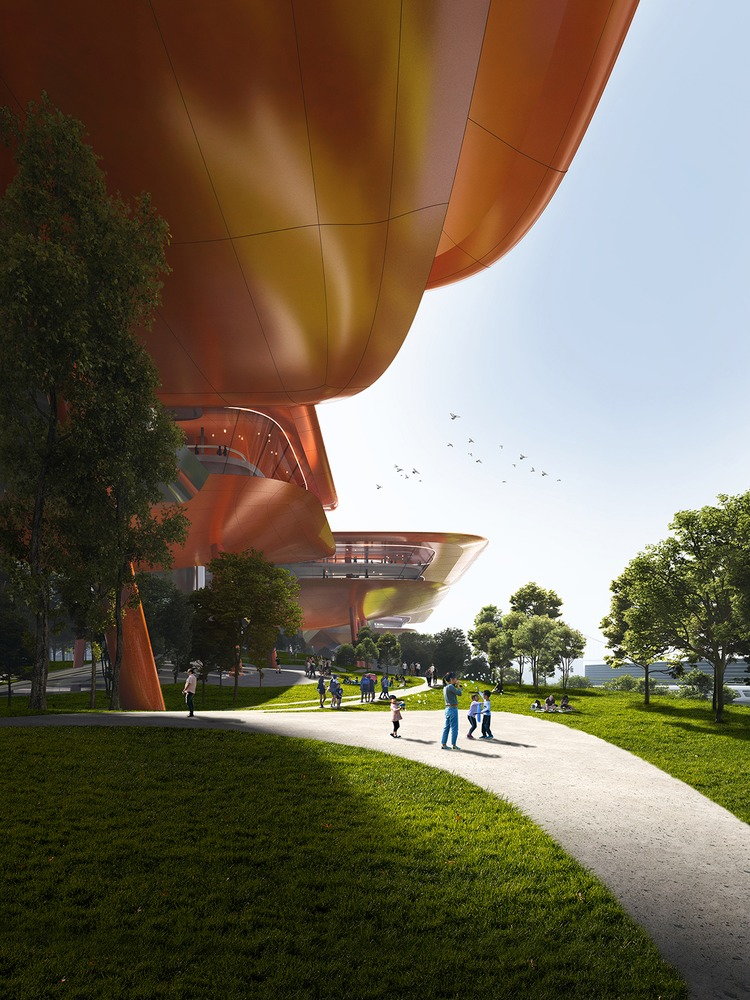 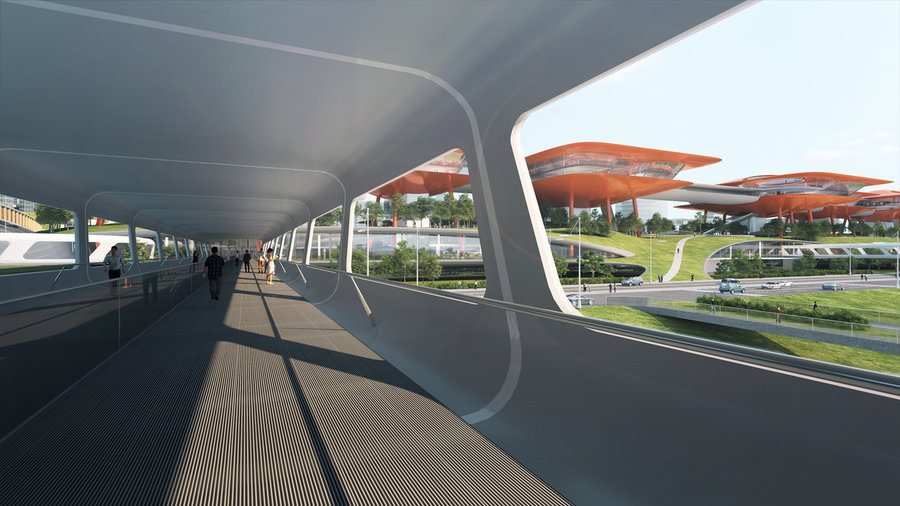 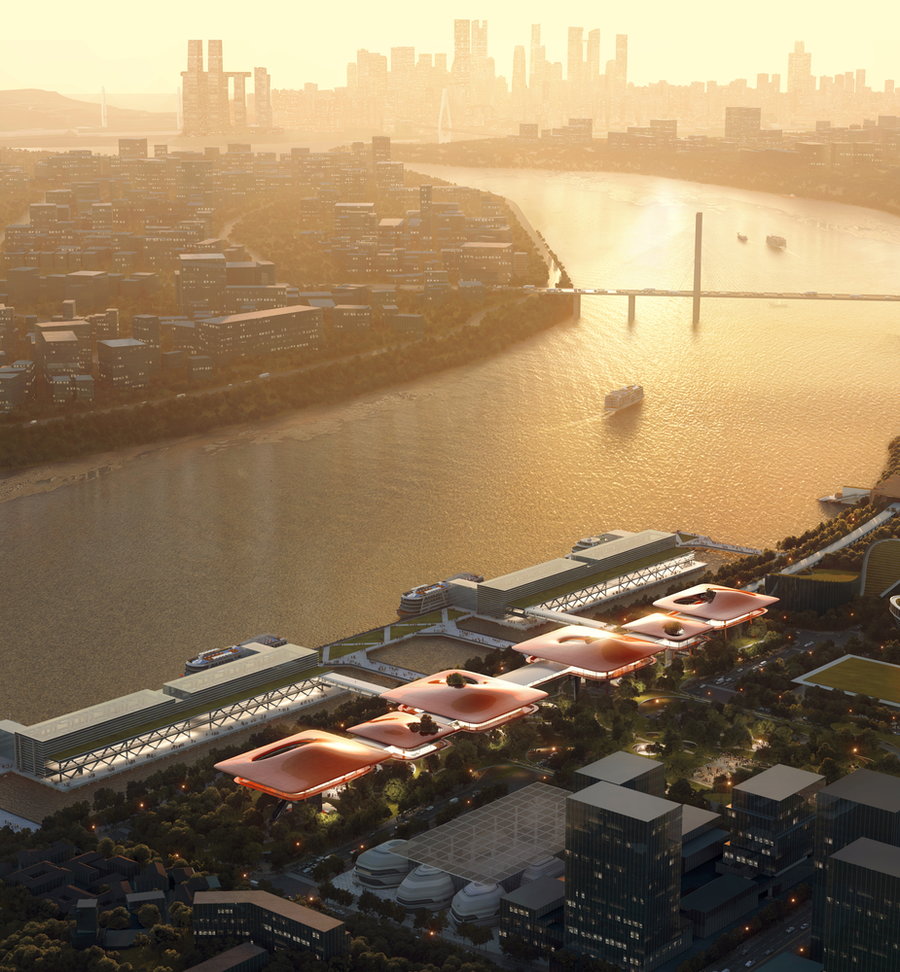 An aluminum curtain wall lends a surreal feel to the building, which also hosts mixed-use retail spaces, restaurants, and other commercial areas. Beneath the “floating” skywalk is a new Cruise Ship Landscape Park and Cruise Ship Hall that extends the Cuntan Central Golden Axis Pier to form a new link between the adjacent Pier Park and Century Cuntan Park. Together, they’ll create a massive new urban green space offering scenic views of the river and city from a place that’s currently unpleasantly industrial. 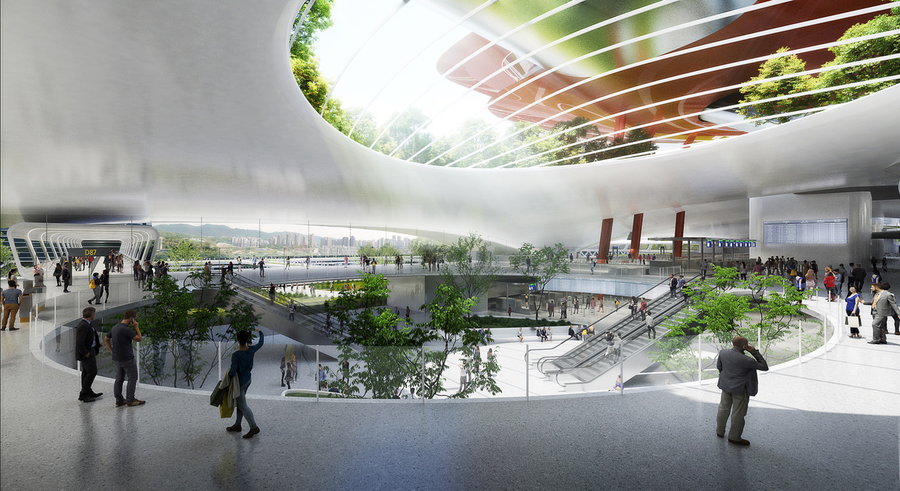 “Chongqing has mountains and waters,” says Yansong. “However, the Yangtze River is more than just a natural landscape in Chongqing. Because of human activities such as shipping traffic and industrial transport, this mountain city is also full of energy and movement. We want to transform this energy in Chongqing from traces of industry into an energy that stimulates the imagination. People can feel the kinetic energy of the city here, but also imagine the public spaces of the future.” 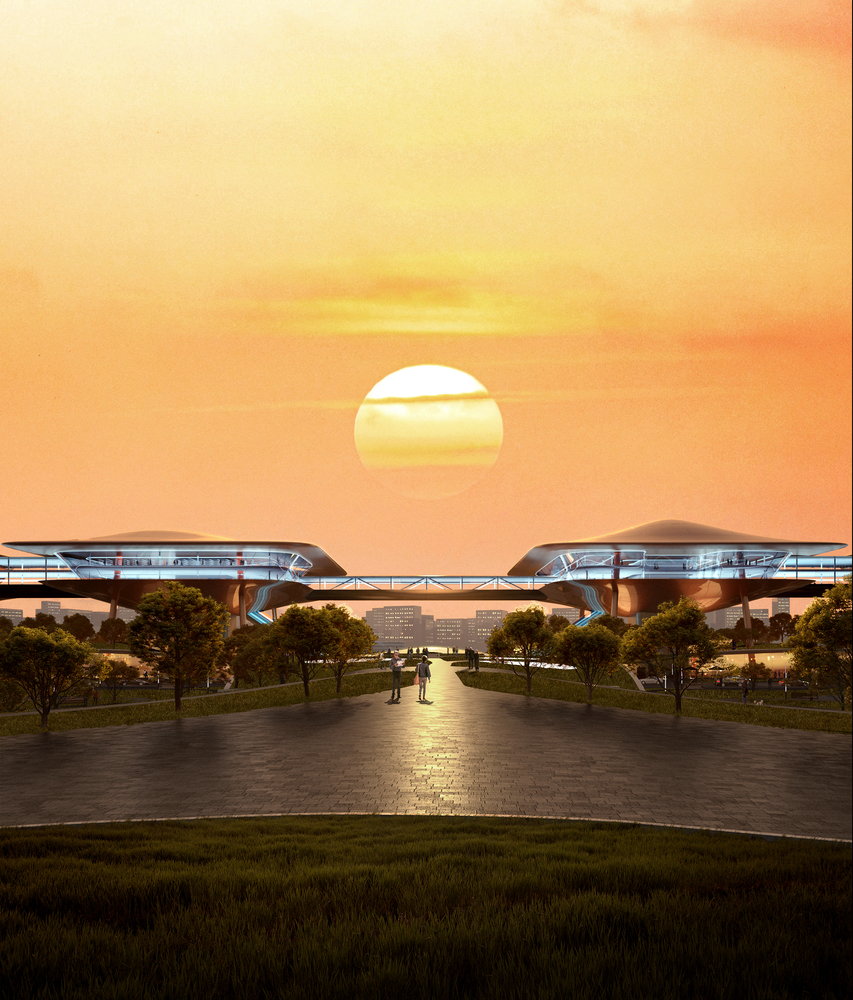 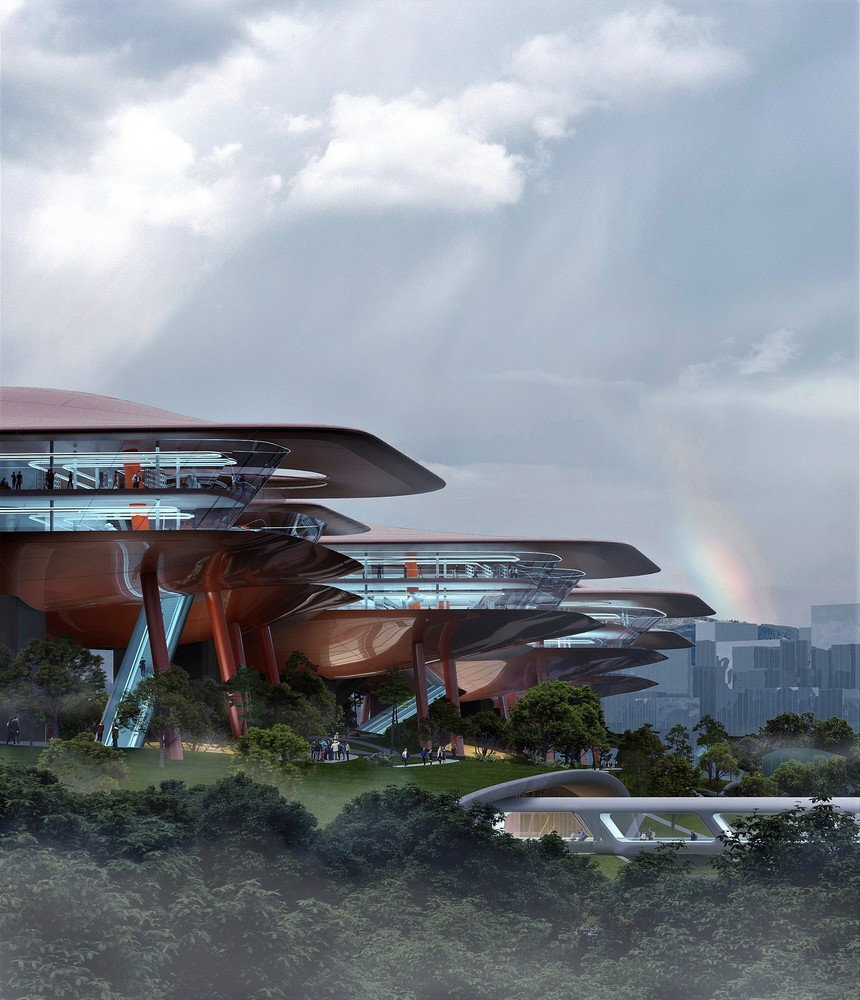 MAD says the scheme will create a new urban landmark while shifting the feel from industrial to a greener, more attractive vision of urban life. The Chongqing Cuntan International Cruise Center is part of a larger effort by local officials to transform the area for tourists and residents alike. In fact, they imagine that this stretch of the Yangtze will become “the world’s preeminent river cruise port” with an unusual mix of ship, port, city, tourism, shopping, and entertainment attractions. Construction is expected to begin in November 2022, with completion by 2027.