It’s only our brains — and perhaps, our fingers — that have put humans on top of Earth’s food chain. Without those advantages, we’d be hard-pressed to compete with just about any other species. After all, we’re really just small, delicate creatures lacking built-in protection from the elements. So what would the world be like if we were smaller than most other animals, too? 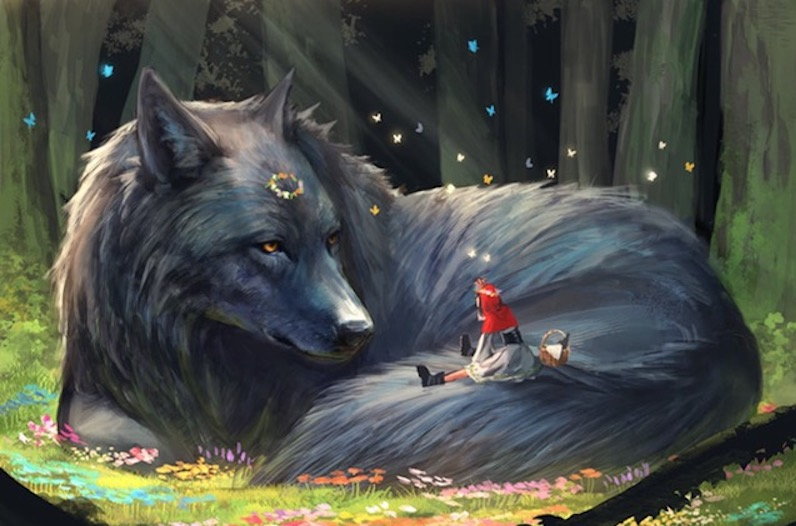 Japanese artist Monokubo imagines such a scenario, but it’s not quite as terrifying as it sounds. Her digital paintings depict cats, wolves, foxes, birds, and other creatures at what could be a monstrous scale in relation to humans and their built environments, but the mood is far from fearful. Instead, each enlarged animal is like a gentle giant, regarding the tiny people around it with curiosity.

Some of the creatures are protective, offering their small human friends shelter or a place to take a nap. In fact, many of the paintings depict people sinking their faces or entire bodies into the warm, comforting fur or feathers of the oversized animals. It’s an understandable impulse, especially for those of us who are unable to resist rubbing a cat’s soft belly when the opportunity arises. 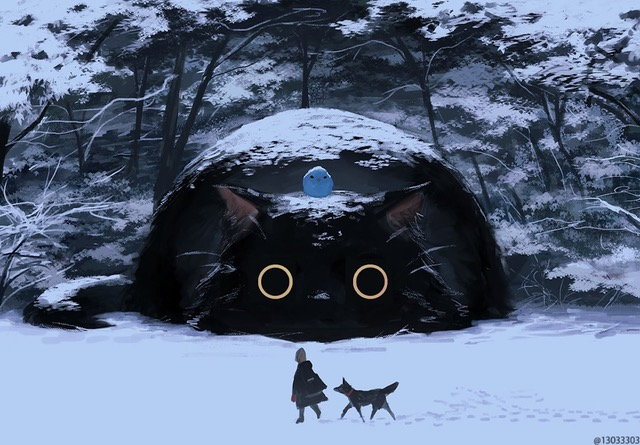 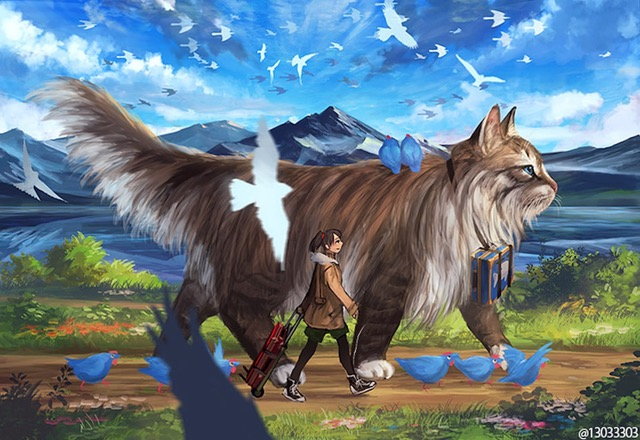 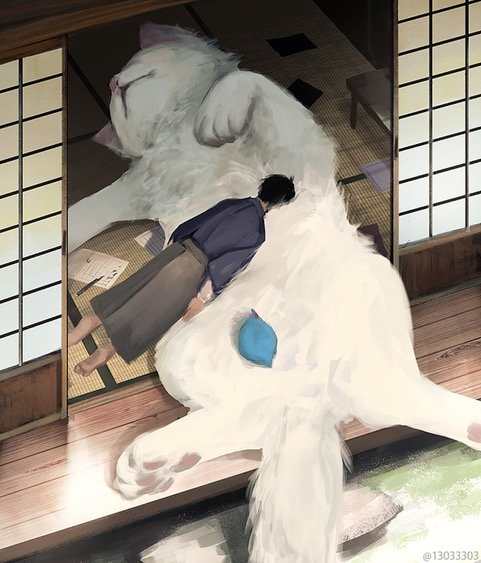 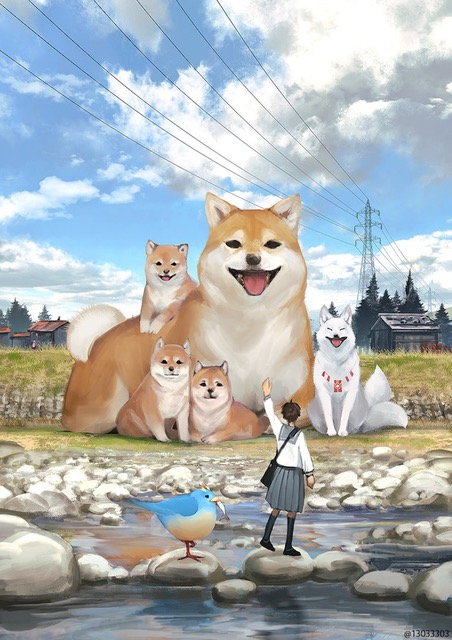 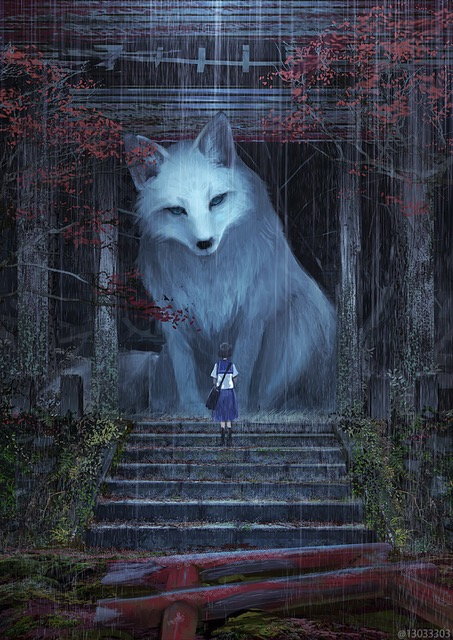 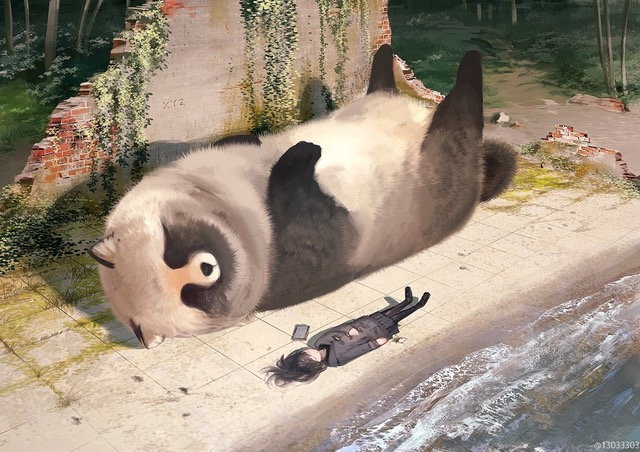 Others are just doing whatever they’d normally do if people weren’t around — digging in the snow, lounging in the grass, taking a walk, curling up in the forest, or keeping watch from a rooftop (albeit a much smaller rooftop than usual). In other pieces, there’s a palpable sense of anticipation, like one of a wide-eyed cat that seems to be getting ready to pounce. Truthfully, most of us wouldn’t want to be batted around like a toy, so that part is still a little scary to imagine.

If you’re a fan of Studio Ghibli films, some of these paintings might feel familiar. Monokubo first got the idea for the illustrations after watching animated films like Princess Mononoke and My Neighbor Totoro, in which oversized animals are the norm. She tells My Modern Met that she usually chooses to paint animals that have made big impressions on her daily life, like her own cat. 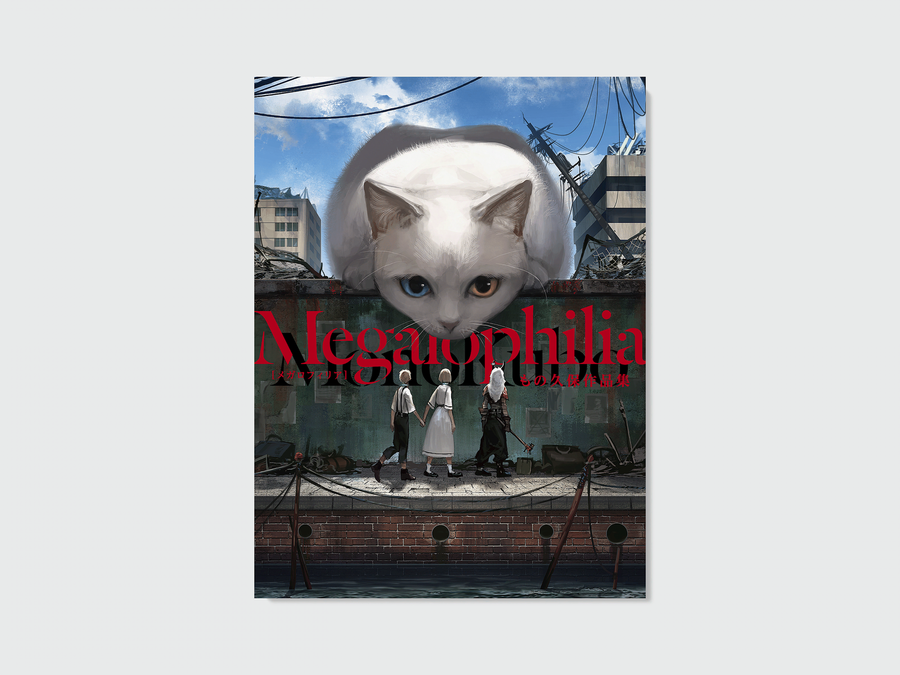 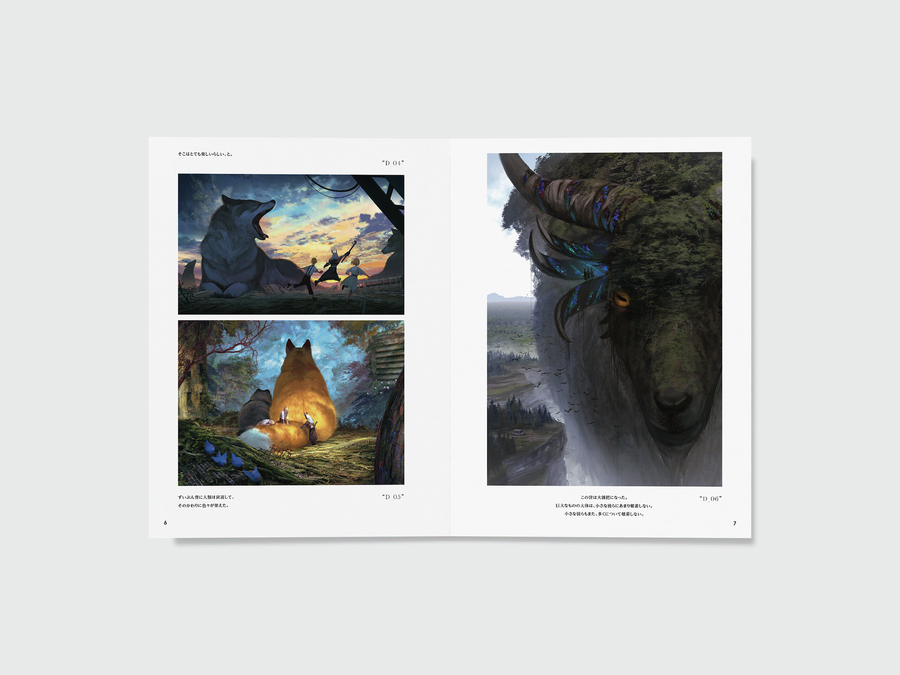 The artist doesn’t reveal much about herself beyond that, but the endearing works she’s created speak for themselves. And if you really love Monokubo’s digital fantasy paintings of cats and other animals, you can have them in your home in the form of a book. The artist released Monokubo Art Works – Megalophilia in 2018 through Japanese publisher KADOKAWA, and it contains 160 pages of wonderful furry images. Here’s the description via AnimeBooks.com, where you can purchase the book:

“Ever got that feeling that someone is looking right at you but you don’t see them? How about an animal trying to blend in [with] their surroundings so that you don’t see them? Artist Monokubo illustrated an average fantasy life of three characters going about their day as they see giant animals lurking around every corner. The artist depicts the essence of each animal and incorporates the characters into their surroundings. A great art book for animal lovers out there.” 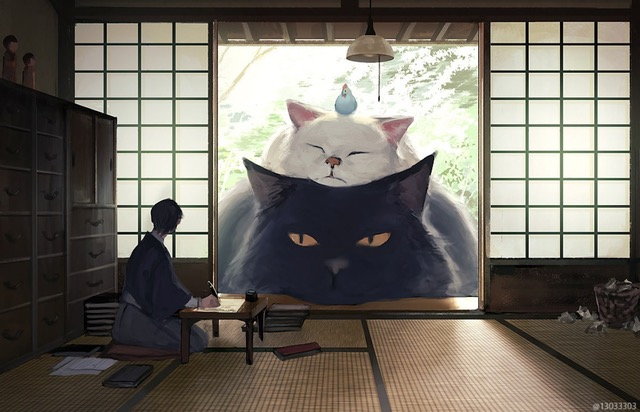 Keep up with Monokubo’s latest illustrations by following her on Instagram.