As pedestrians and motorists cruise past the new British Antique Museum (BAM) in Kamakura, Japan, the building changes before their eyes. The undulating hinoki wood facade is carved in a 3D polygonal pattern inspired by the traditional craft of Kamakura-bori, a form of lacquerware made by carving patterns into wood and then lacquering it with layers of color. 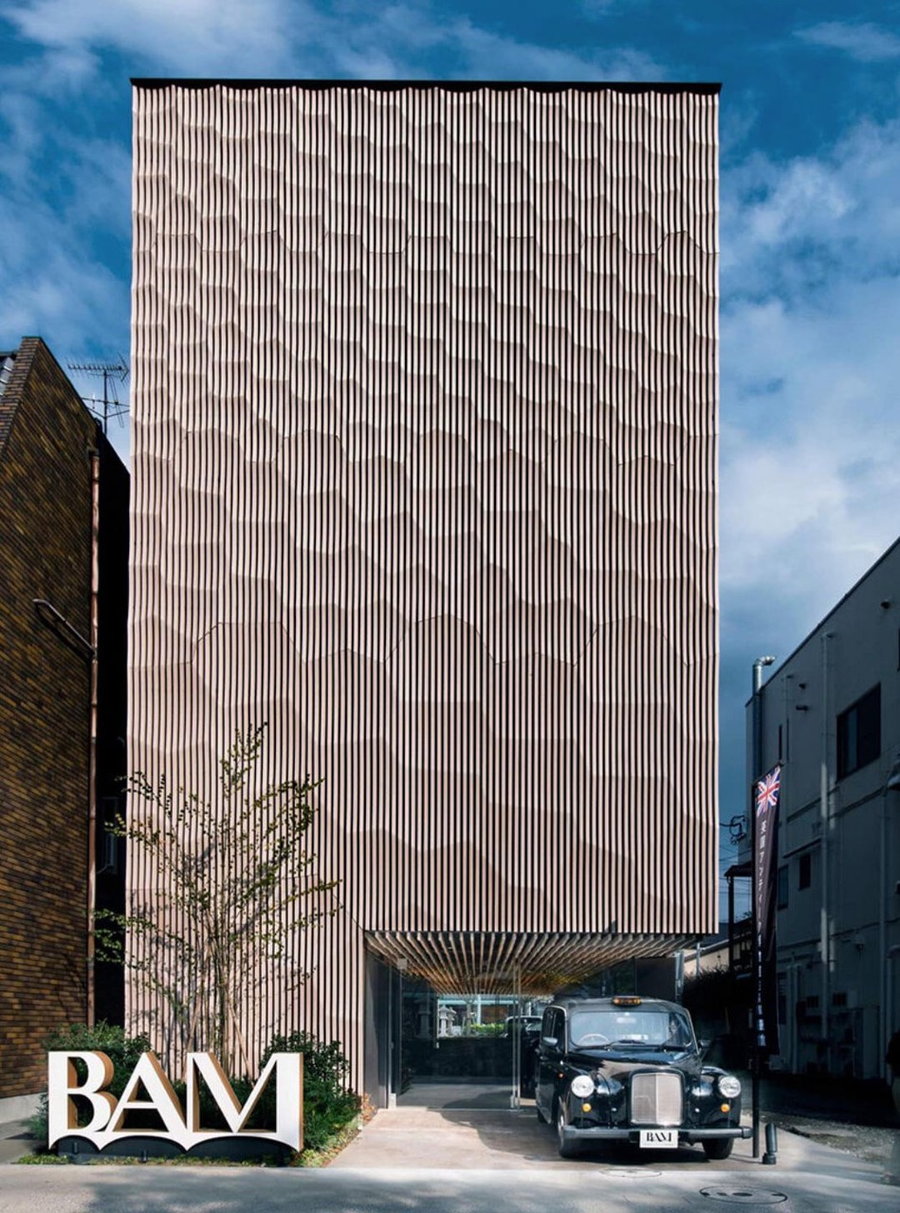 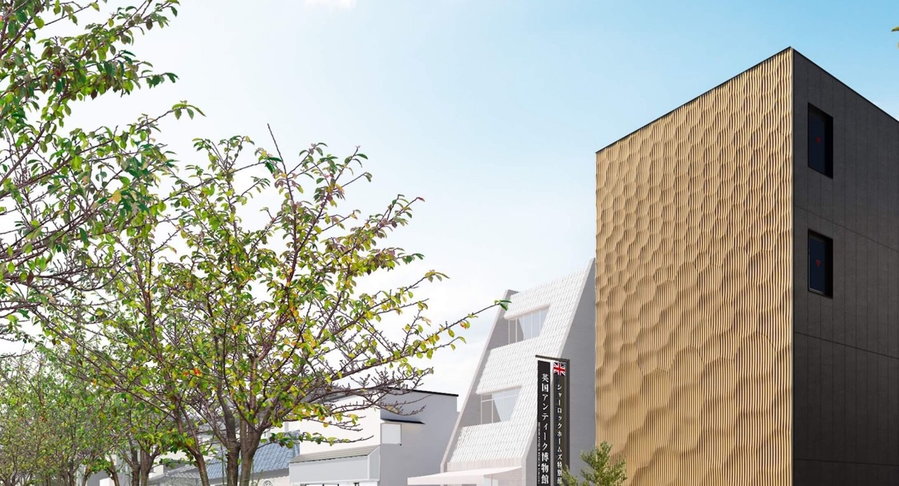 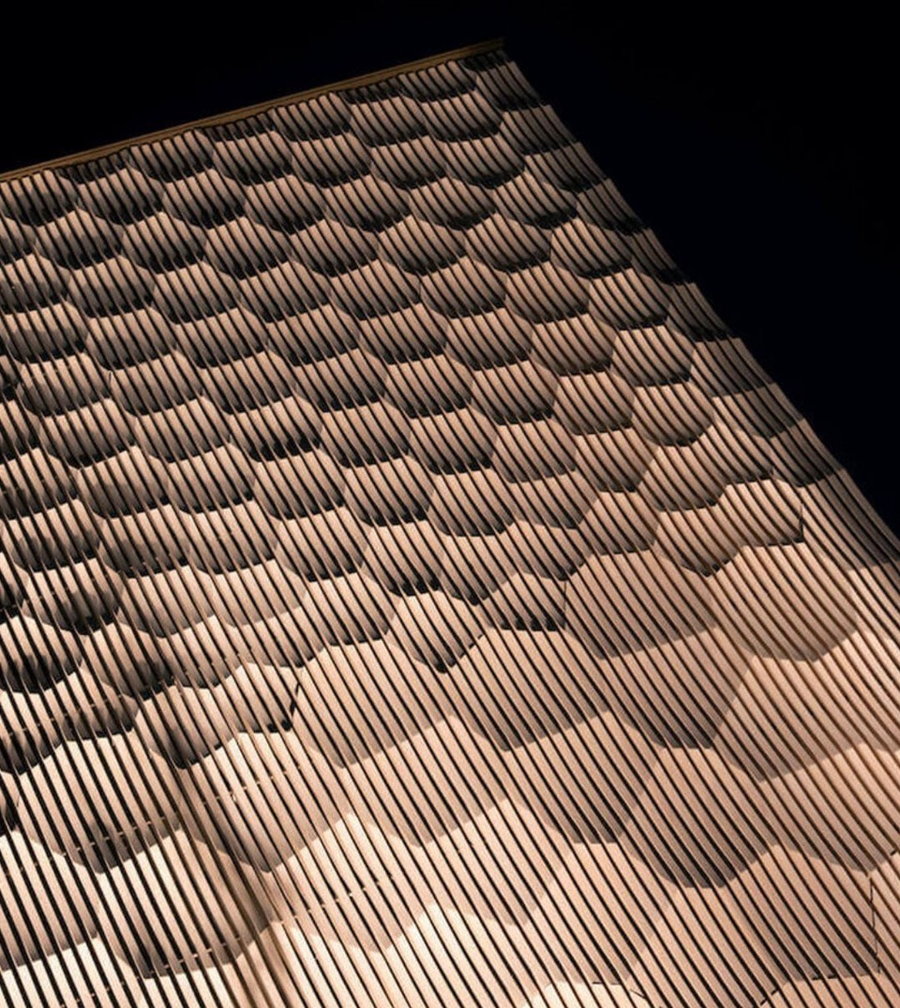 The high and low points of the installation seem to shift as they catch the light from different angles, creating a dynamic, almost kinetic effect. Designed by famed Japanese architect Kengo Kuma, the British Antique Museum opened in September 2022, honoring the close relationship between the town of Kamakura and Great Britain. 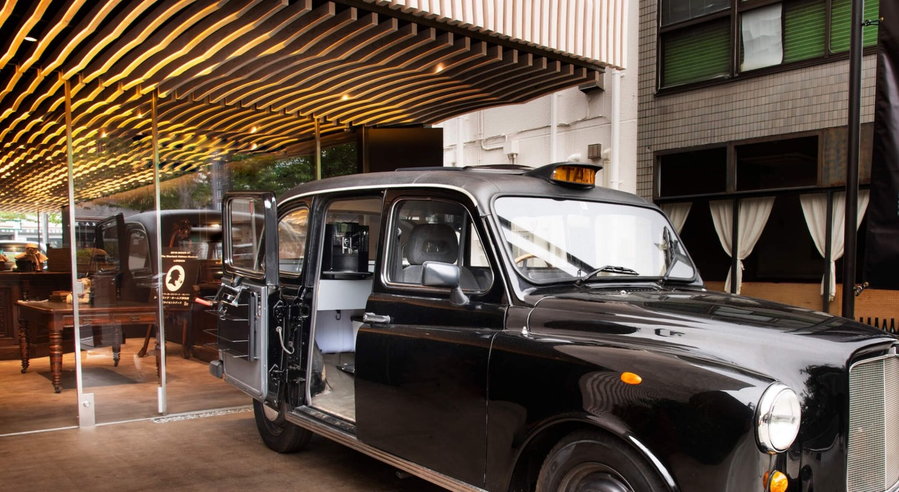 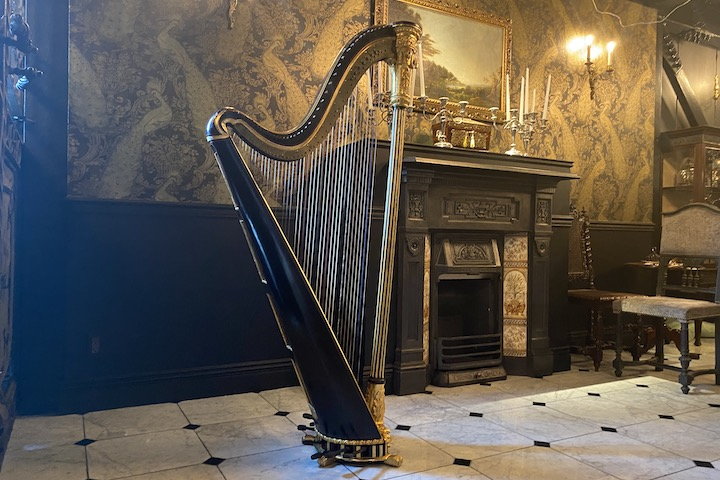 Just a one minute walk from Tsurugaoka Hachimangu Shrine and a seven-minute walk from Kamakura Station, BAM exhibits British antiques collected over the years by museum director Masaomi Dobashi. The museum consists of four floors, each representing a different era and theme. The first floor is the museum shop, featuring a London taxi and telephone box. On the second floor, visitors will find Georgian-era antiques, including leather trunks, red cloaks, and bearskin hats worn by the Royal Guard. 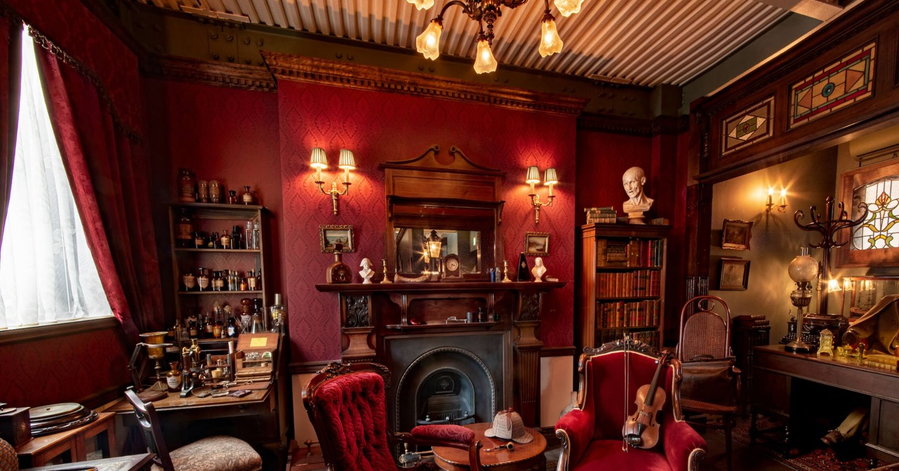 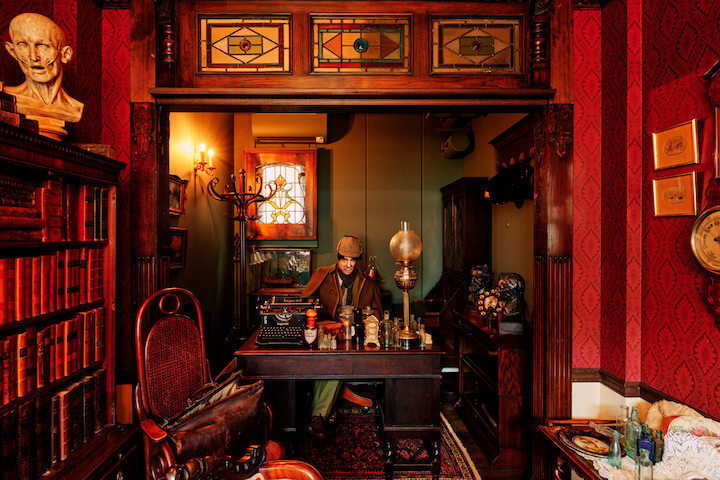 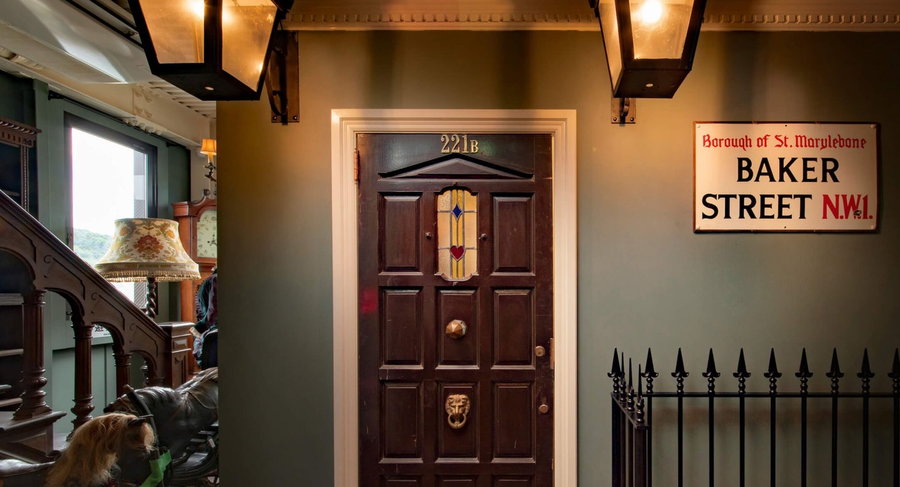 On the third floor, visitors step into the world of Sir Arthur Conan Doyle’s novels with a Sherlock Holmes-themed exhibit that recreates the fictional detective’s study and living space down to the most intricate details. The museum explains that “in the front, there is an armchair that invites clients in, and the gourd-shaped gasojin (soda water maker) that appears in Holmes’s story, as well as antique microscopes and physics and chemistry equipment, are reproduced as they were at the time.” 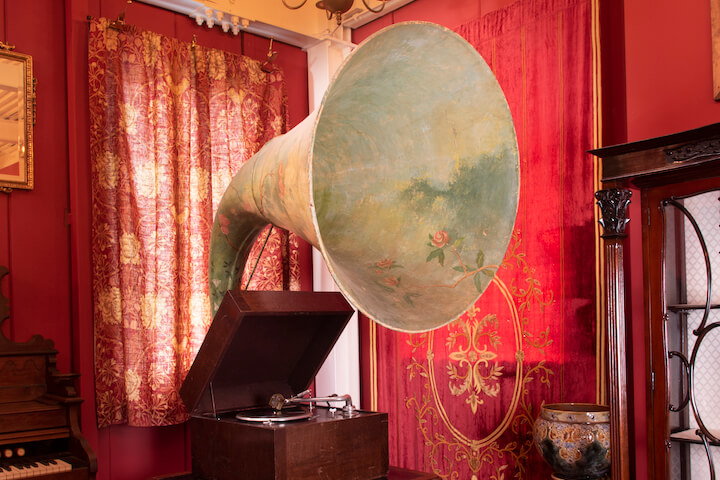 Standout objects on the museum’s Victorian-themed fourth floor include a John Broadwood & Sons piano, an extra-large gramophone made in 1935, a fireplace from a Kensington mansion, and stained glass featuring an image of Queen Victoria.

“As a connection between Kamakura and England, there is the National Trust movement that started in England in the Victorian era,” Dobashi explains on the BAM website. “It is the permanent preservation of historically significant land and assets through donations, and many scenic spots have been preserved as heritage. Kamakura is the place where the idea of the National Trust was introduced for the first time in Japan. ‘Kamakura’ is linked to the desire to cherish the good old British things, and the wonderful cultural heritage is still inherited.” 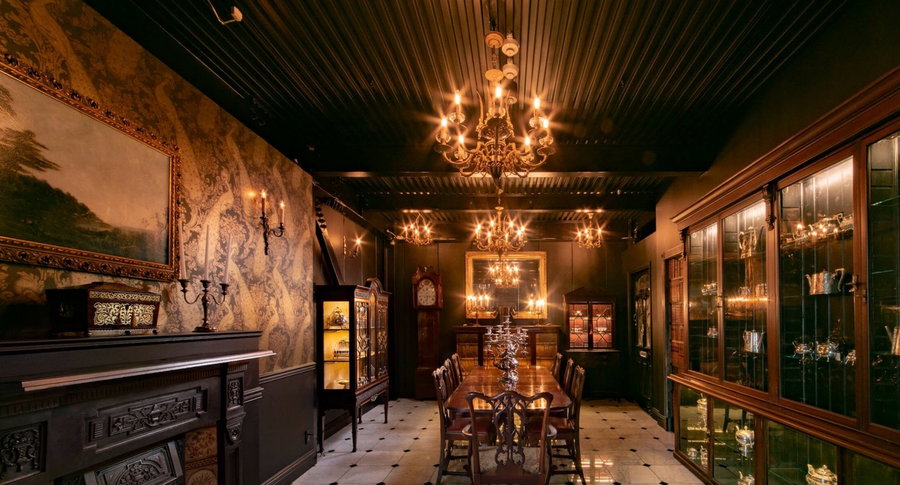 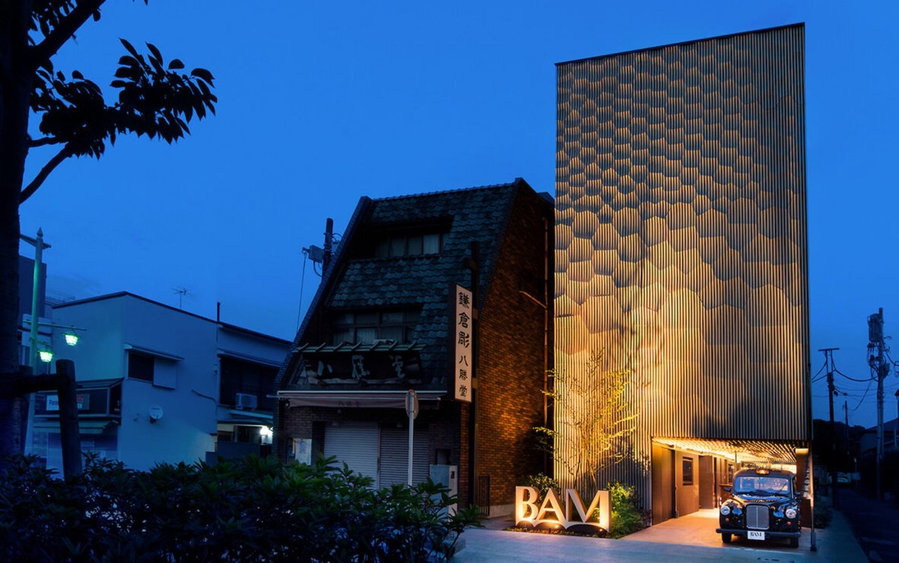 “British antiques and modern electric cars are exhibited there, and it can be said that it is a timeless fusion of old and new,” Kuma says. “This time, the British Antique Museum BAM, which stands on the approach to Kamakura’s historic Dankazura, is lined with pure antiques that have absorbed more than 100 years of time collected by Mr. Dobashi. In that sense, I thought that the design of the building should be as pure as possible. As a result of repeated deliberations, we eliminated all the windows and made it simple, adopting a facade inspired by Kamakura-bori, which symbolizes the traditional culture of Kamakura.”