Japanese home designs are known for their simplicity, stark aesthetics and sense of balance … so while this beach house has elements that fit in with traditional minimalism and elemental modernism, the strangely postmodern home-shaped windows stand out all the more strongly within the rectilinear box-like structure.. 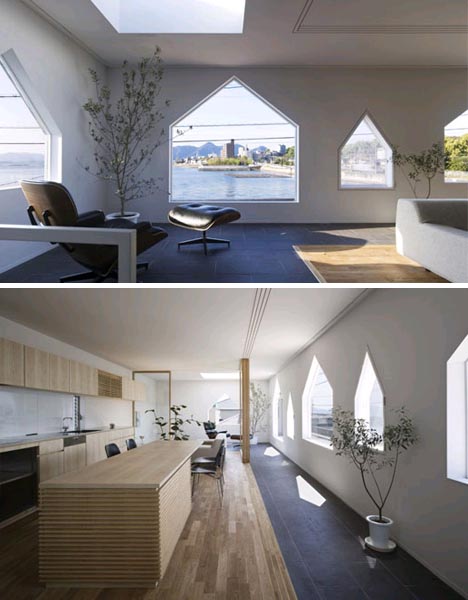 The effect of this simple architectural move by Suppose Design twist is quite profound. There is a way in which it recalls middle-eastern arch forms but beyond that there is the curious way in which it casts shadows and informs views to the beach and water beyond. Suddenly, exterior scenes are strangely framed in house-shaped portals – giving them an oddly domestic feel. Aside from this most obvious aesthetic move, there is a sense that the offbeat outer shell as almost a separate entity from the floating wooden platforms and mobile wood-and-glass partitions that surround it in the center of the main living space. These more standard design elements are at once simple and domestic but also provide another clever point of contrast to enhance the effect of the windows that still surround them.