In Studio Ghibli’s beloved 1988 Japanese animated fantasy film My Neighbor Totoro, the titular character Totoro is an adorable furry giant who lives in the forest. An important scene in the film features him encountering the film’s human protagonist, Mei, at a bus stop, where he holds a green leaf over his head to hide from the rain. She in turn offers him her red umbrella, and he gives her a gift of acorns wrapped in a bamboo leaf to plant. 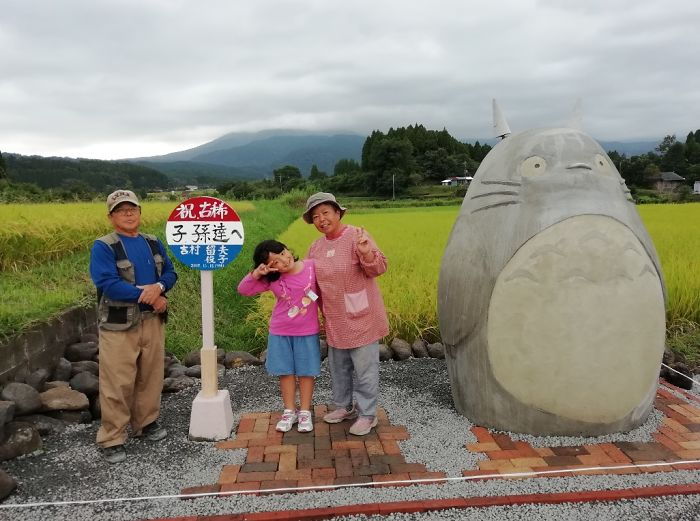 Now, kids (and kids at heart) all over Japan can travel to a recreation of this heartwarming scene in the rural town of Takaharu, Miyazaki Prefecture, where a “life-sized” Totoro stands waiting at a (fake) bus stop. A couple marking the milestone of turning 70 years old wanted to celebrate by creating the attraction for their grandchildren, as well as other children who might derive joy from seeing the cuddly replica. 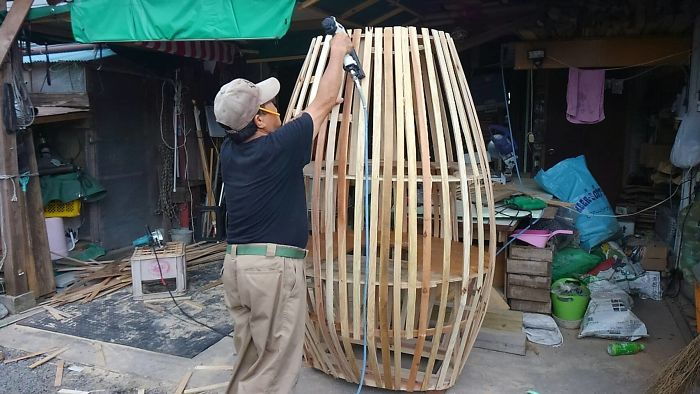 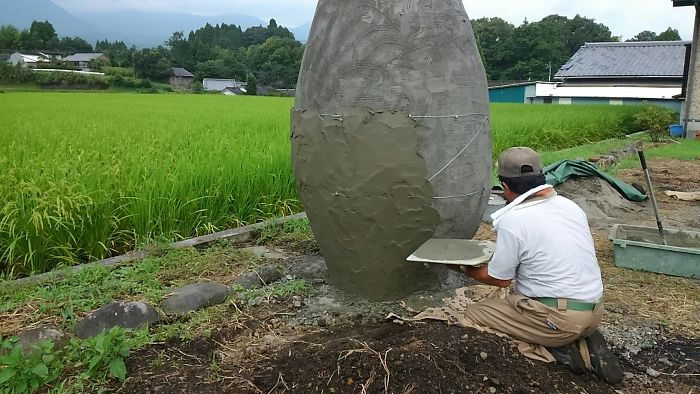 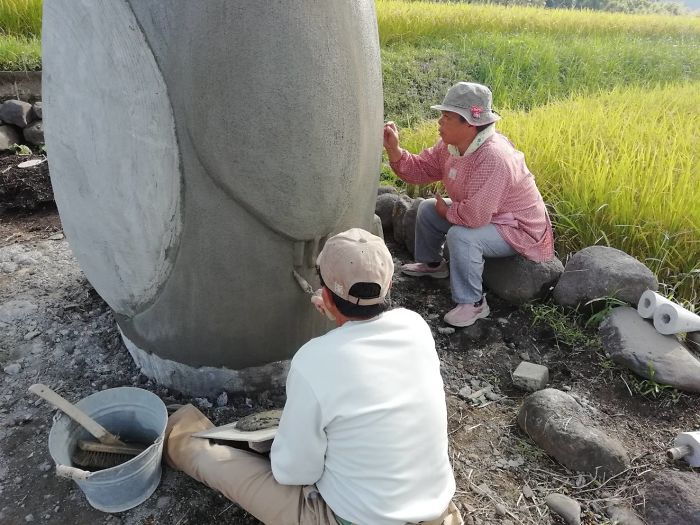 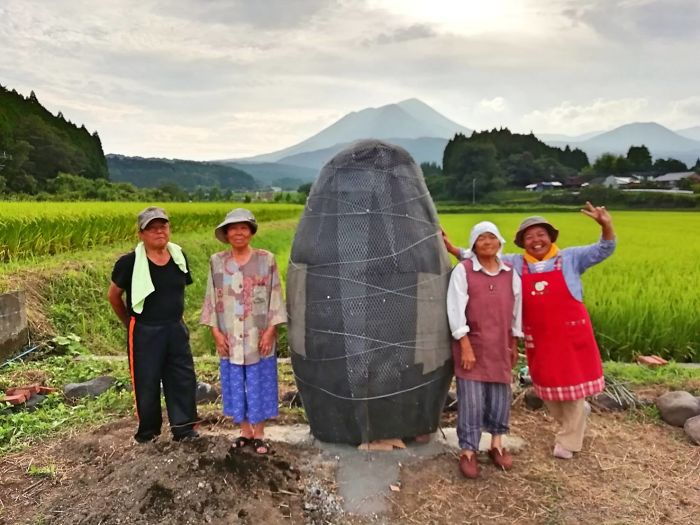 The grandfather, who worked as a plasterer for 50 years, started by creating a wooden barrel as the base and layering cement on it. His wife and other elders from the neighborhood helped smooth out the surface and add details like the pointy ears, whiskers, and big round belly. They then set their replica on a bed of gravel and bricks on their own private property, placing a bus stop sign directly beside it. They have since installed a “fortune telling” vending machine in the area and begun renting out red umbrellas as photo props.

Naturally, it wasn’t very long before the installation started to draw visitors. The couple’s grandkids loved it, and so did just about everyone who learned of its existence. It quickly became such a big tourist attraction, the local town authorities had to release guidelines about respectfully visiting it, going so far as to recommend convenient guest houses located nearby. They even added three parking spaces so multiple people can visit at once to try out their best poses and post their photos on social media.

The couple’s hard work helped bring the magic of the film to life, and the result is undeniably adorable. It’s no wonder Totoro fans from all over the world are starting to make their way there. 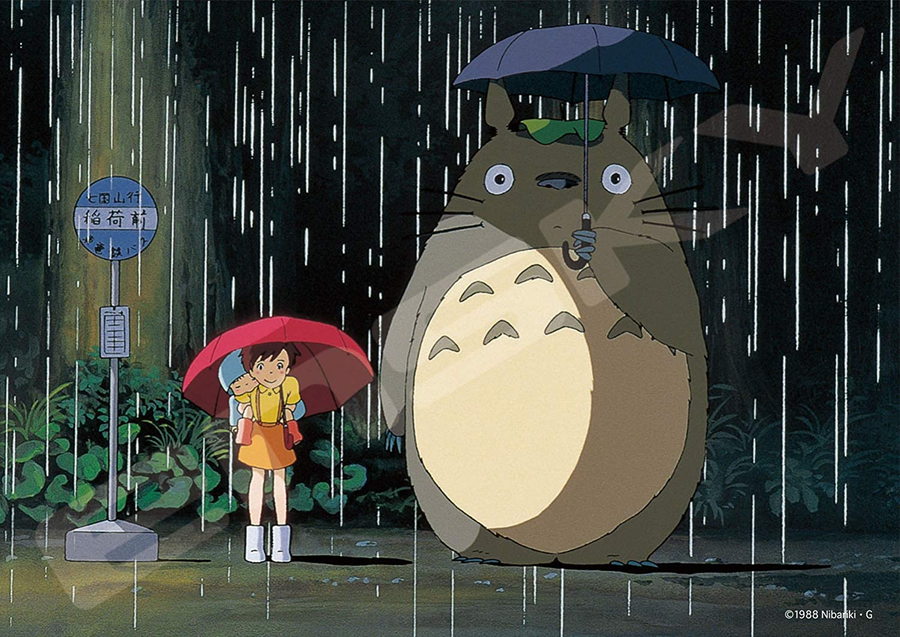 Totoro himself is inspired by legendary creatures called Koropokkuru from the Ainu tales of Japanese folklore. Unlike Totoro though, they’re not furry creatures, but rather tiny humans. Their name means “people below the leaves of the Fuki” in the Ainu language, and as the story goes, they were the original inhabitants of the northern Japanese islands. Short, agile, and skilled at fishing, they are often depicted holding leaves over their heads.

If you want to visit the Tonari no Totoro Bus Stop yourself, it’s marked on Google Maps at 7538-6 Kamamuta, Takaharu, Nishimorokata District, Miyazaki 889-4414, Japan. You’re welcome to give him a hug and take your photos between 8 am and 6 pm each and every day. 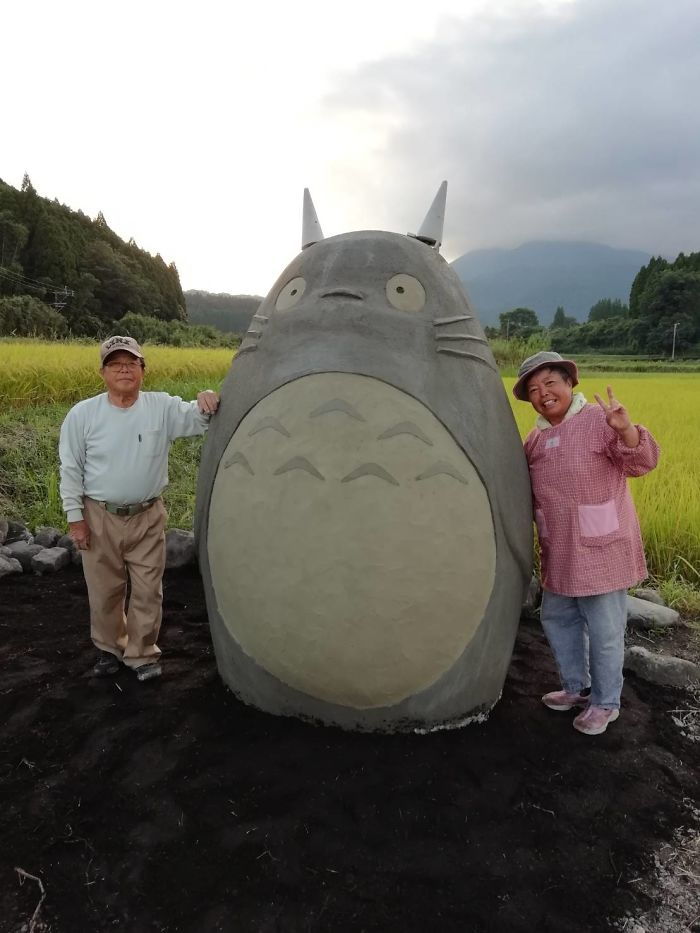 Are you a big Studio Ghibli fan? You’ll love the artwork of Japanese artist Monokubo, who creates fantastical digital paintings featuring friendly oversized animals like wolves, cats, foxes, and birds, all of whom similarly watch over, protect, and play with their human companions.