Architecture firm Herzog & De Meuron’s striking design for 56 Leonard Street was an attention-getter from the very beginning, often called “Jenga-like” for its unusual stacked proportions. Set along the High Line in New York City’s Tribeca neighborhood, the residential tower is packed with some of Manhattan’s priciest luxury condos. Most of them sold pretty quickly, including the $47 million penthouse on the 60th floor. 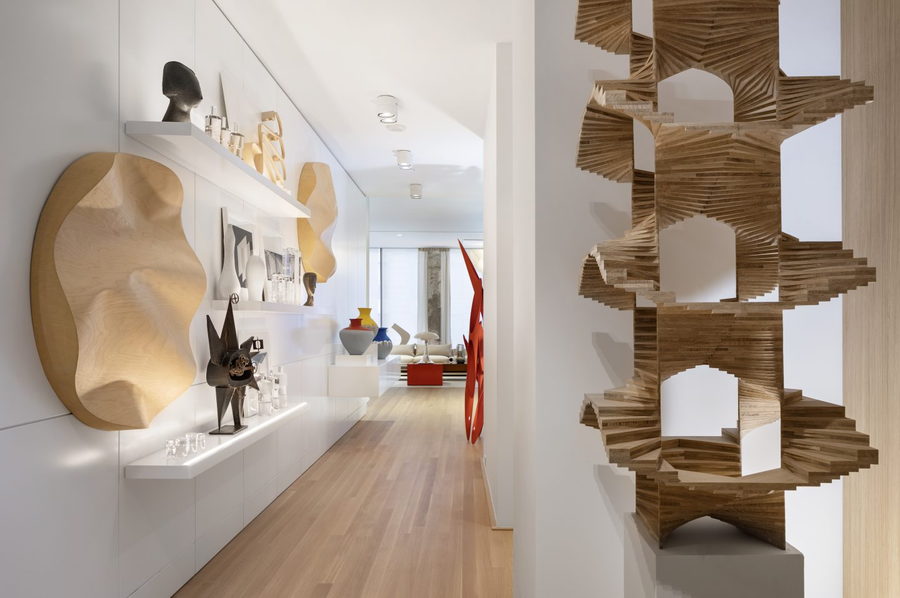 For architect Lee Mindel, who purchased one of those units, one of the building’s best amenities is a bean-like sculpture located just outside, tucked between the second floor and the sidewalk. The mirrored piece by Anish Kapoor gave him a flash of inspiration that guided his designs for his apartment, which was recently named Interior Design Magazine’s 2019 Best Large Apartment of the Year.

Located on the corner of the sixth floor, Mindel’s 3,000-square-foot two-bedroom home is like a gallery unto itself, including pieces by Zaha Hadid, Ai Weiwei, and Gaetano Pesce. The Bean may still be the flashiest work of art visible to passersby, but another one draws a lot of curiosity, too: a lacy white object on Mindel’s own balcony, which is actually an aluminum sculpture by Marc Fornes. If you lean over the balcony railing, you can see the Kapoor piece just below. 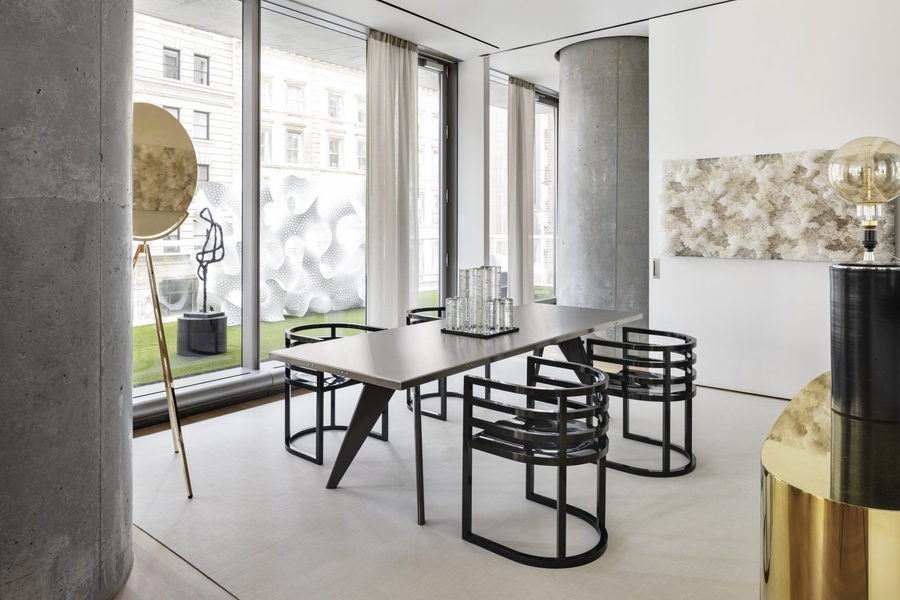 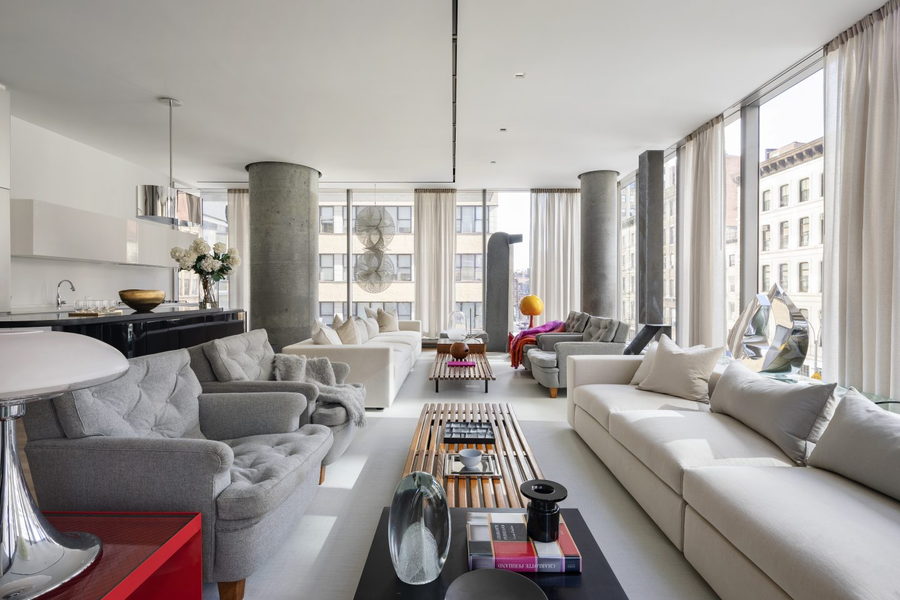 For Mindel, curating his own living space as an indoor/outdoor sculpture garden is a way to honor the architecture of the building. Fittingly, the rest of the apartment is offered up as a “blank canvas” for the creativity and curatorial instincts of Mindel and his partner, designer José Marty, as well as the talents of others.

The home is certainly expensive, but its design isn’t as ostentatious as you might expect. Structural concrete pillars pierce through the floors and ceilings, bringing in a bit of an industrial edge. The white walls and plentiful natural light were ripe for personalization, while sliding panels (in lieu of conventional doors) separate spaces like the living room and bedroom when needed without making them feel cut off or diminished. 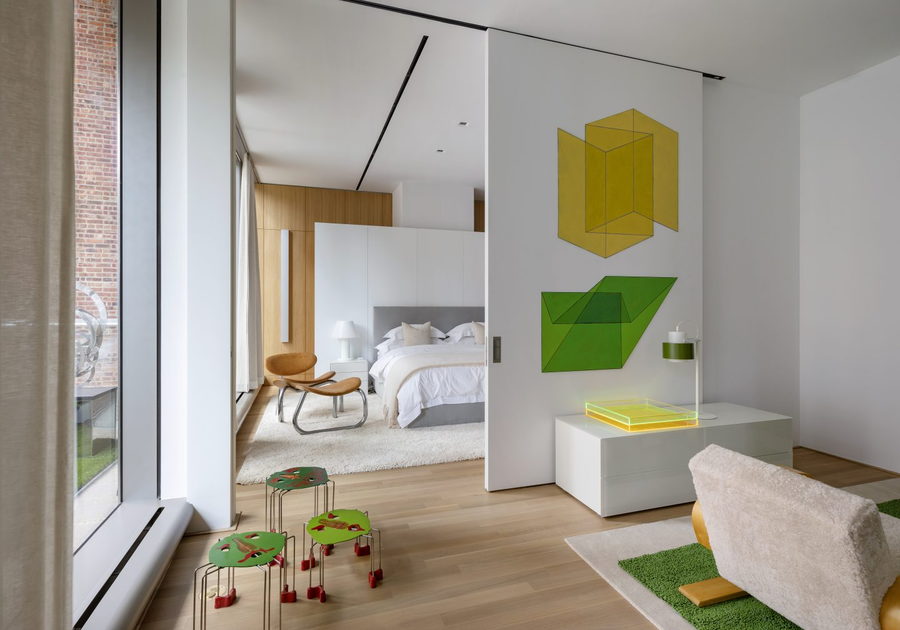 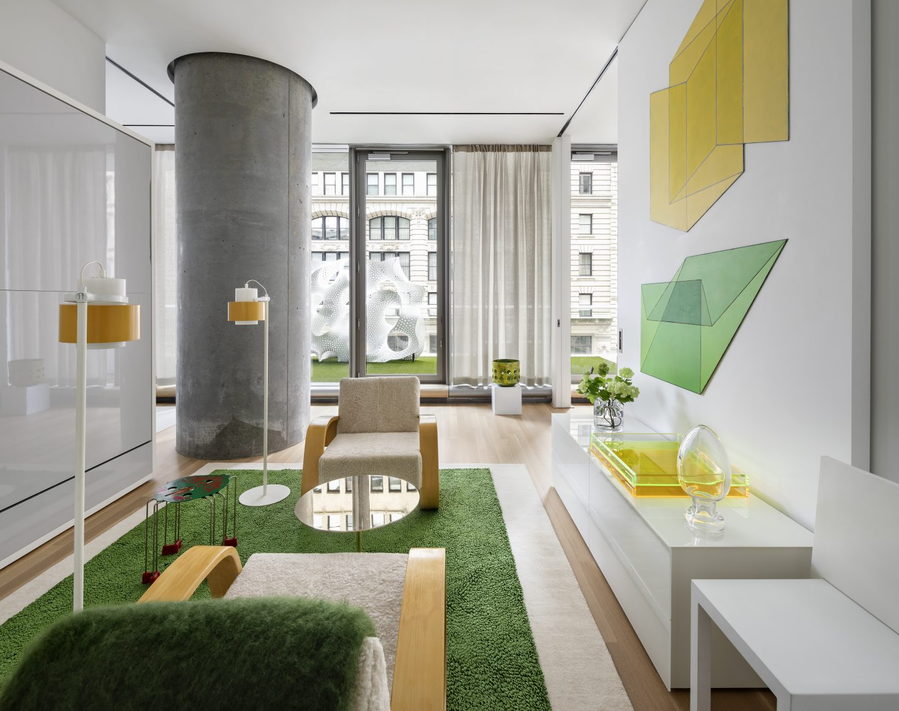 The architect was already quite familiar with the building before moving in. His firm designed the sales office on the bottom floor, which reads like a chic designer showroom crossed with the lobby of a modern boutique hotel. Many of the same sensibilities pervade Mindel’s personal spaces, where every last element seems to have been carefully considered. 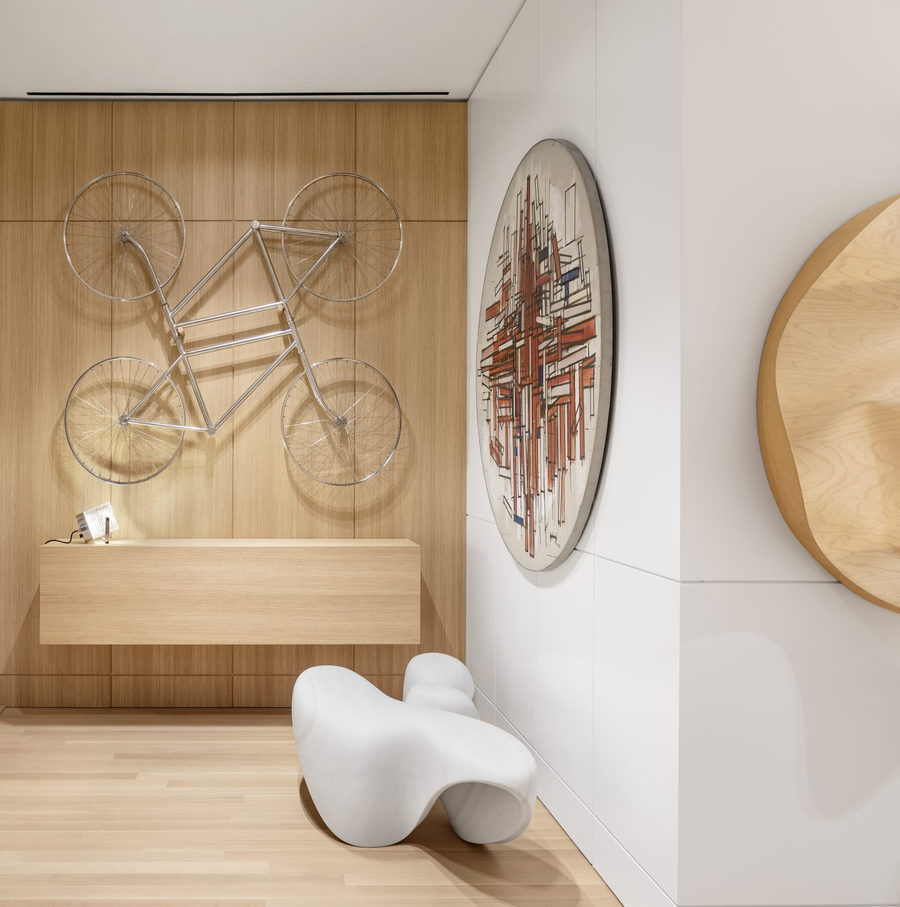 A silver bicycle sculpture by Weiwei gleams against one wall, while another hosts a bookcase full of color-coordinated objects. Green carpets augmented by yellow accents echo the astroturf on the terrace, infusing the whole space with a cheerful sunny feeling. Many of his midcentury furnishings were sourced from the original Four Seasons restaurant. Four couches face each other in front of the floor-to-ceiling windows looking out onto the terrace. 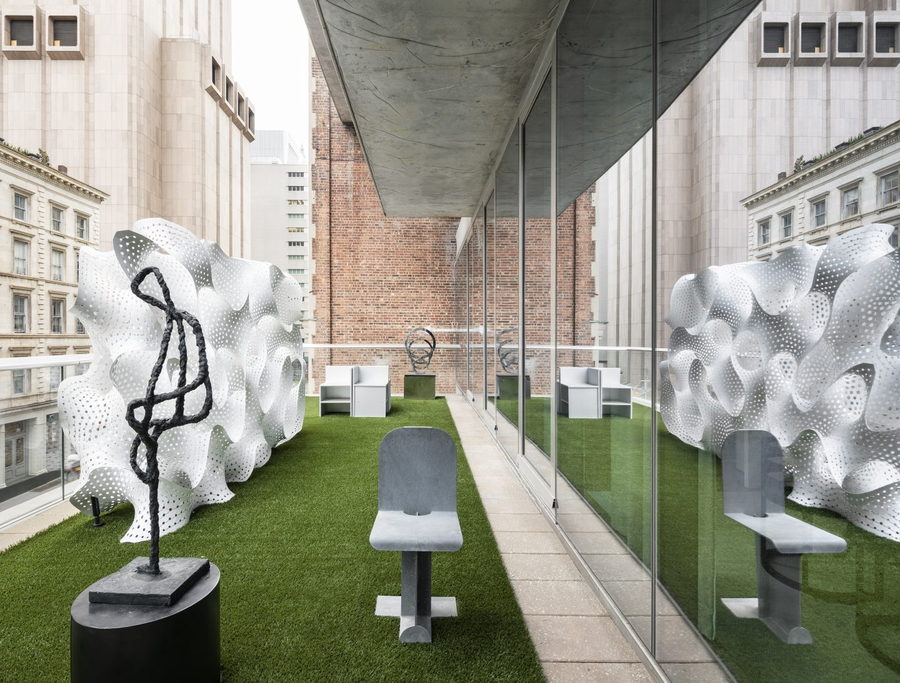 “This was a very complex furniture arrangement because it’s meant to continue the terrace through,” Mindel says in a video tour of the apartment with ADPRO. “You’re working on a curatorial basis, but simultaneously those objects are part of [the] architecture.”