Most IKEA stores take up a huge amount of space — about 300,000 square feet on average, including the parking lots. That’s roughly the size of five football fields. So perhaps it’s not too surprising that they’re usually located well outside major metro areas, in suburban or industrial settings that can be hard to reach via public transit. 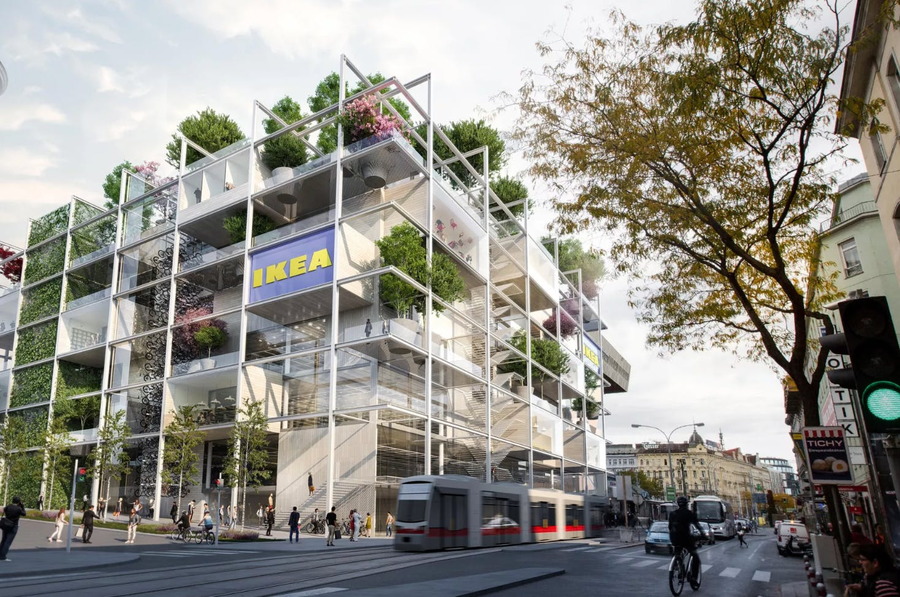 But the Swedish company realizes that people in big cities want to stop by, grab what they need, and head home on the bus or subway, so they’ve recently started experimenting with a few new options. In 2019, they opened a few small, boutique-style stores in New York, London, and Paris that allowed customers to see and feel the goods and order them for delivery, but that still didn’t seem to satisfy the desire to actually shop.

Now, in a first for the retailer, a new urban store in Vienna will offer full service right by the Westbahnhof train station. There’s just one catch: there’s absolutely zero parking. That’s kind of the whole point. Designed by Querkraft Architekten, the new seven-story store consists of a bunch of airy, open modular boxes stacked on top of each other, with greenery poking out in every direction. It’s directly marketed to people who will be arriving on foot, bicycle, or public transit. 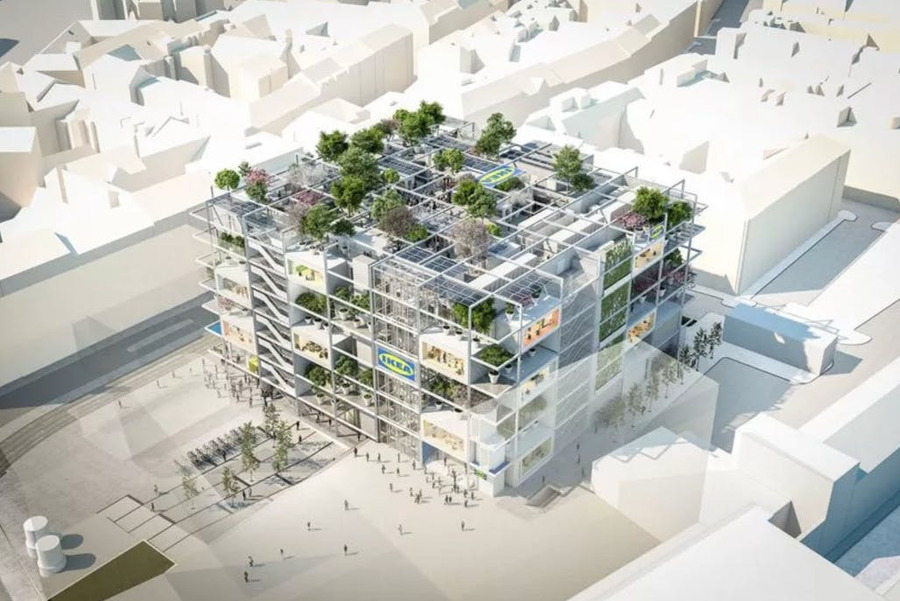 “The concept focuses on the current mega trends and takes into account the dramatically changed shopping behavior, as well as a new form of mobility without a car,” reads an official company statement. “Customers have little time and appreciate convenience and comfort. This is clearly noticeable in the furnishing [sector]: more and more customers no longer even think about carrying their purchases home themselves. You can have them delivered.”

In fact, the store will deliver large purchases that are difficult to transport within a maximum of 24 hours, so customers will still get the stuff they need fast, albeit (presumably) at an upcharge. But just as much as it will be a traditional retail store, the urban Ikea Vienna location also aims to be a local destination. The large green roof and terraces will offer plenty of spots from which to gaze out at the city, while the store itself will have the usual IKEA cafeteria and concessions. 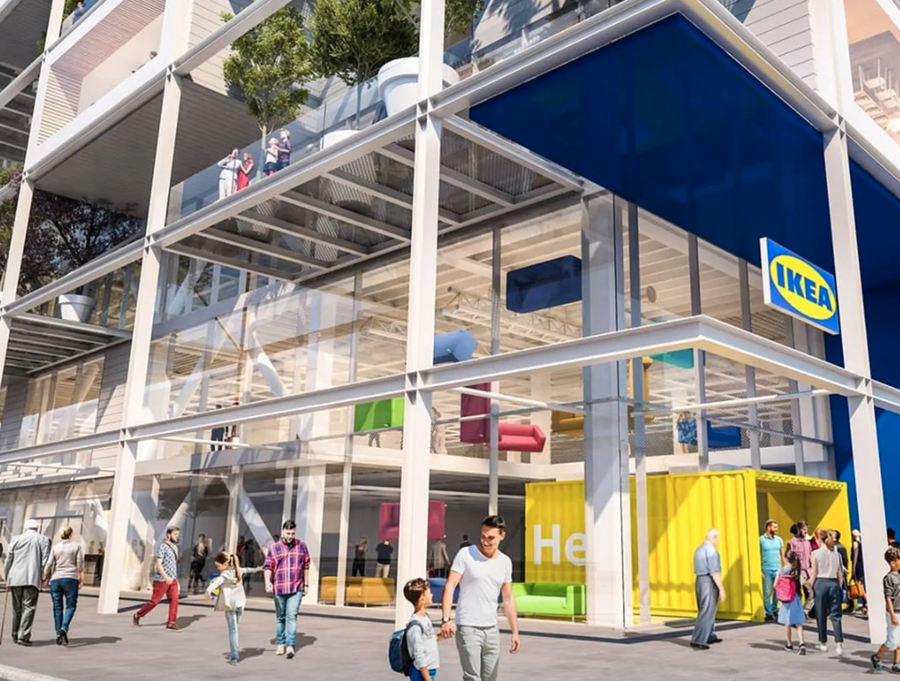 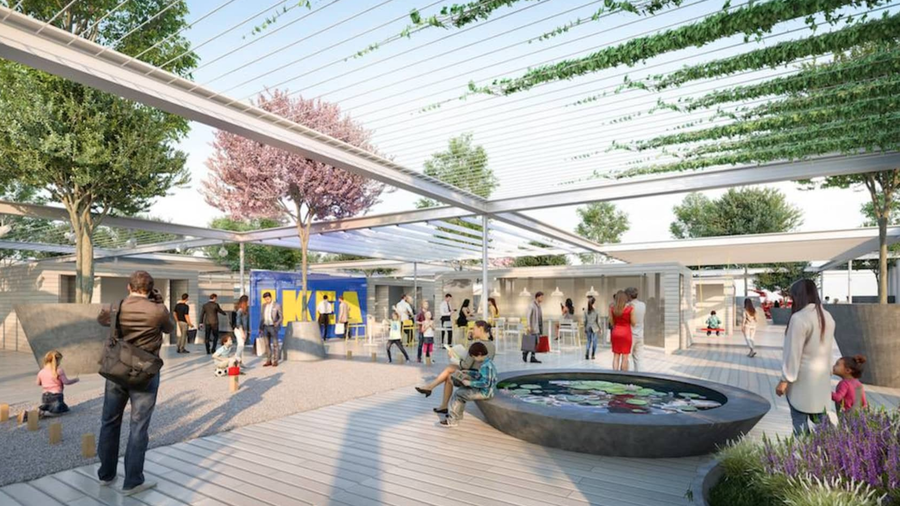 Querkraft Architekten says they designed the store around two pillars: consumer convenience and sustainability. The large volume of trees on the facade are part of this strategy, implanted in hopes of influencing the local microclimate. The company adds that: “Vegetation is the most important measure in the city of Vienna’s urban heat island strategy. Trailing plants and moss facade elements are further factors which have a cooling and humidifying effect like the trees.” 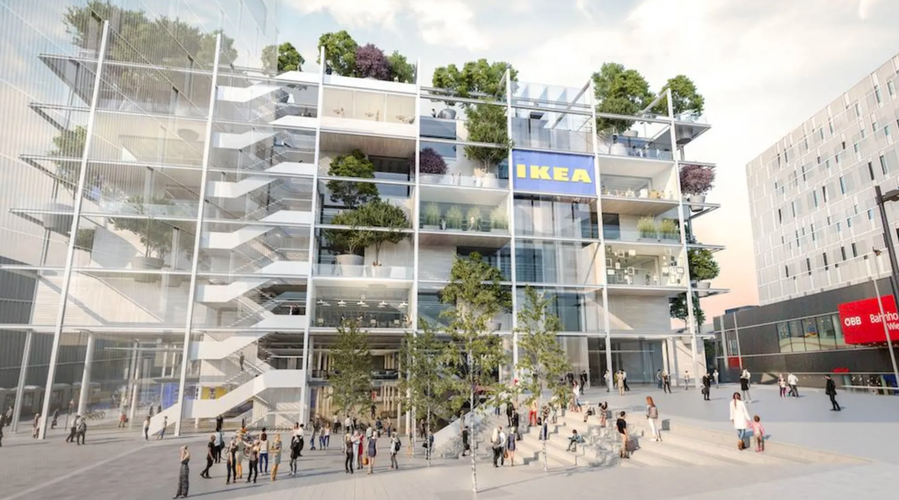 Construction started on January 7th, 2020, and it’s expected to be complete sometime in 2021. Once open, it’ll be interesting to see how the public reacts to the new setup. Reception is expected to be positive in Vienna, which already has a well-developed and heavily utilized public transit network in place, but can you imagine how different it might be in the United States, where people feel entitled to drive and park personal vehicles wherever they want?