No matter how familiar the concept of a desert oasis is, it continues to spark curiosity among us. We marvel at the way humanity has built something out of nothing, even though we do it all the time.

In the northern outskirts of Madrid, next to one of the city’s major highways, is Desert City. It’s much more of a greenhouse complex than it is a city, though, having been built to promote educational events and eco-leisure and overflowing with cacti of all shapes and sizes. It’s sort of like a 21st-century Spanish version of Arizona’s Arcosanti, minus the residential component and a lot smaller. 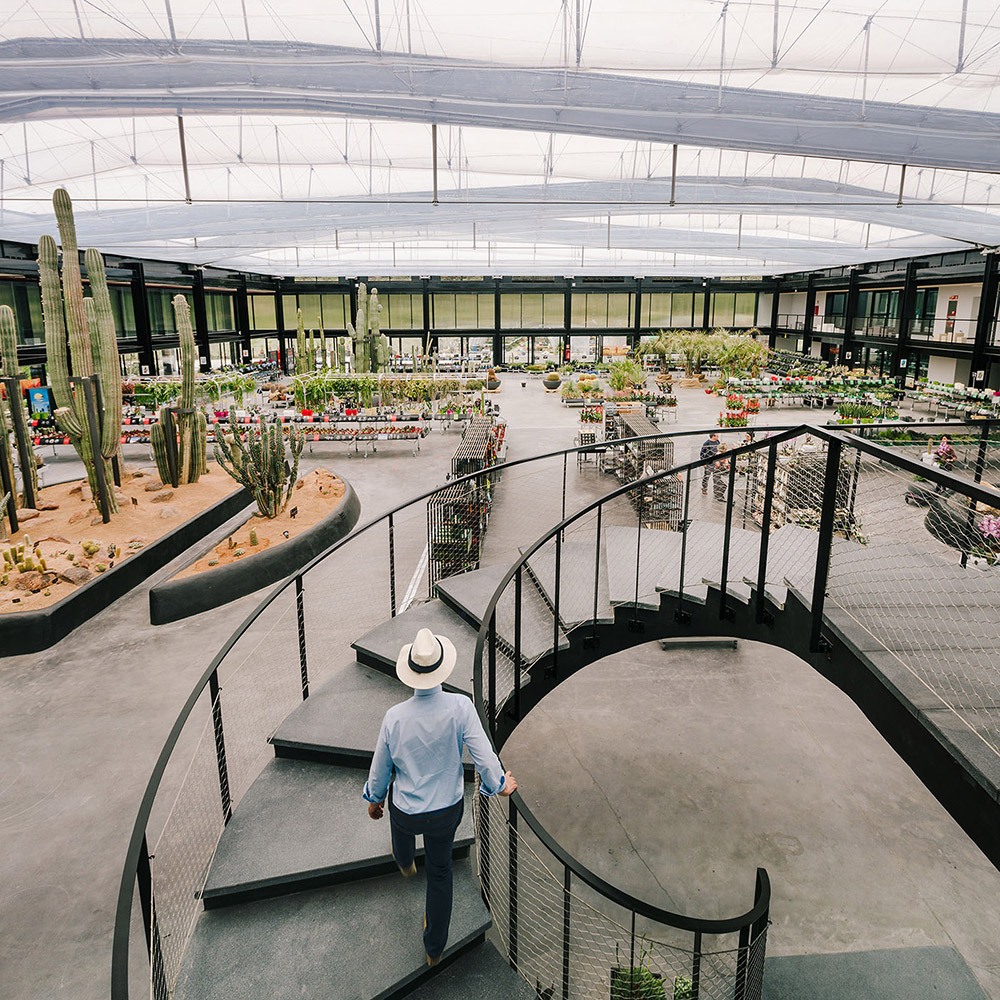 Designed by Garciagerman Arquitectos, Desert City is a biotechnical nursery built to cultivate over 400 species of cacti, succulents, and other xerophytic plants. Some of these plants come from places as far as South America, Oceania, and North America, but many of them are local to the Madrid area.

Ever since it opened in 2017, the complex has been a place where people can learn about sustainable gardening. In many places that suffer from prolonged droughts, water usage can be restricted, especially for landscaping purposes. Promoting the cultivation of xerophytic plants is a way to help those who want to have more vegetation around their homes and businesses while simultaneously observing those regulations. Desert City tries to show that although a garden full of these plants might not be considered lush to some, it can still be incredibly beautiful.

Visitors walk on stone pathways through five sections of the garden: “Arizona,” which boasts an impressive range of cacti, “Oasis,” with its small forest of palm trees, “Tabernas,” with its linear pool and minimalist landscaping, “Guajira,” comprised of species that grow in shaded areas under a catwalk, and “Tuscany,” the garden’s smallest section full of pomegranates and olives. Desert City is a showcase of possibilities, and if the scenery is not enough to impress visitors, then the research most certainly will.

According to the nursery, a Madridian household or business with a 1076-square-foot conventional garden spends an average of €1,050 a year on landscaping. That figure includes the cost of watering, irrigation, maintenance, and the upkeep of tools. With an xerophytic garden, however, those gardening expenses would be cut by two-thirds, creating a total savings of just over €7,000 in ten years. If saving water does not convince people to make the switch, Desert City hopes that saving money will. 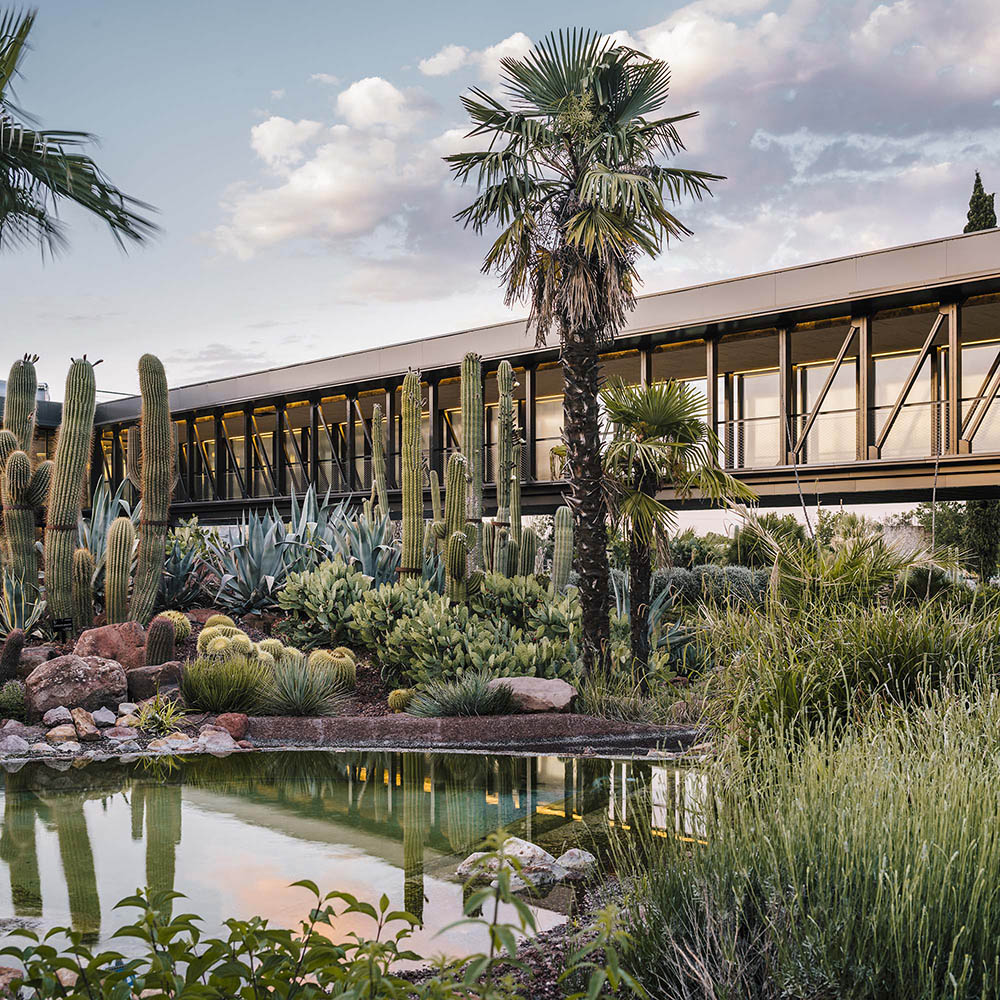 Under the taut roof of its main building, Desert City hosts various conferences, exhibitions, activities, and workshops, all of them serviced by an on-site restaurant and shop. Everything’s enclosed by floor-to-ceiling glass, too, giving visitors uninterrupted views of the gardens outside as they mingle among the plants inside. 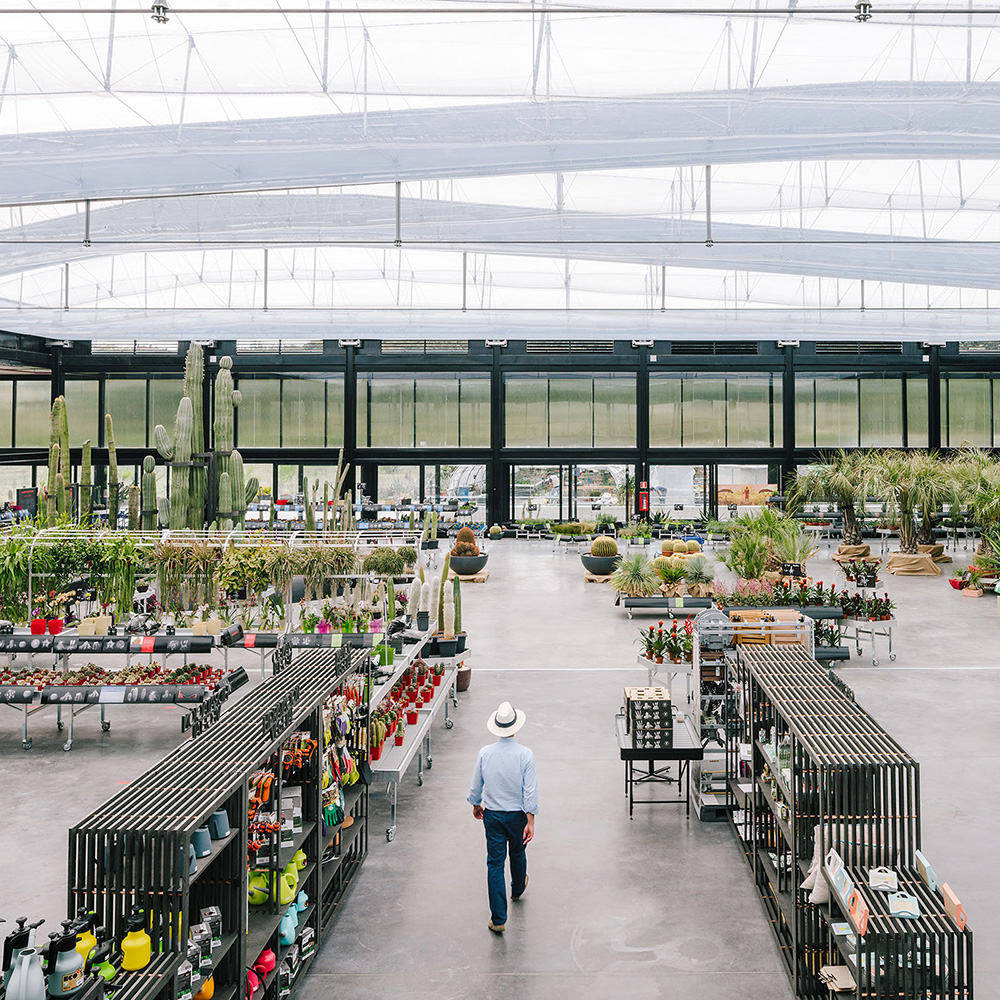 To call such an institution a “city“ is more a matter of marketing than reality, even though there is subtext to its very existence that is based in reality. Still, it’s really more a promotion of a lifestyle that we all need but do not want. That is what makes this desert oasis such a curious creation. We all need to use water more judiciously, but we do not want to live in a world where water is scarce. Unfortunately, in parts of the world that have historically suffered suffering from droughts, that choice has already been made for the people.