Setting a record as the “world’s longest horizontal skyscraper,” Raffles City by Safdie Architects has officially opened in Chongqing, China. The complex features eight towers, four of which support the clear glass promenade offering public access to some of the city’s most incredible views. 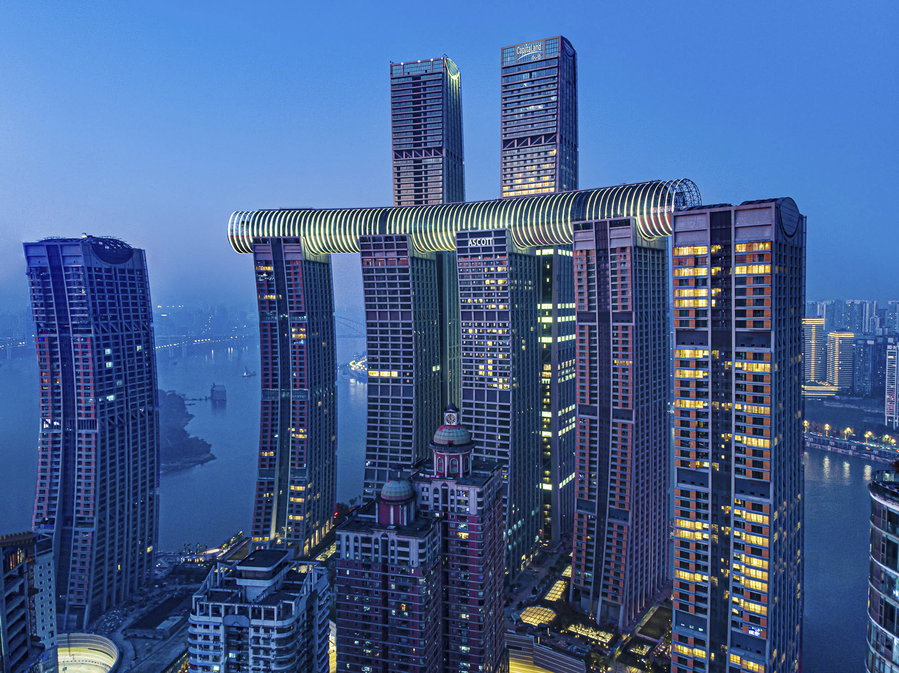 Planned by Israeli-born Canadian architect Moshe Safdie in collaboration with CapitaLand, one of the largest diversified real estate groups in Asia, Raffles City is truly a feat of engineering. The site is exposed to strong winds, so the glass conservatory known as “The Crystal” features an advanced system of frictional pendulum bearings and seismic dampers to make it more flexible. The promenade alone is made of 12,000 tons of steel, 3,000 sections of glass panels, and 5,000 aluminum panels.

Located in an urban district between the Yangtze and Jialing rivers, the 1.12-million-square-meter project contains a shopping mall, offices, 1400 residential apartments, and a luxury hotel in addition to the themed observation deck, sky gardens full of mature trees, infinity pool, and food and beverage zone found in the public areas. 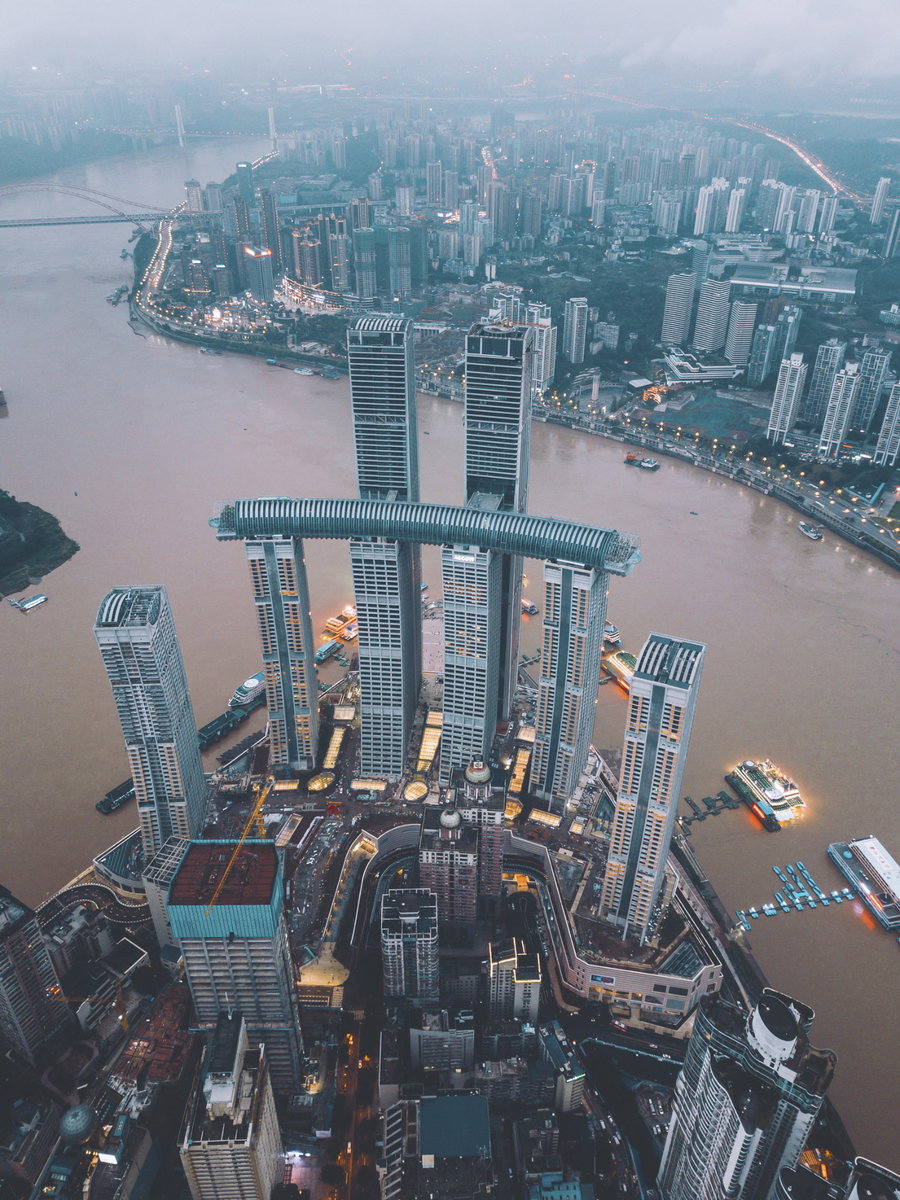 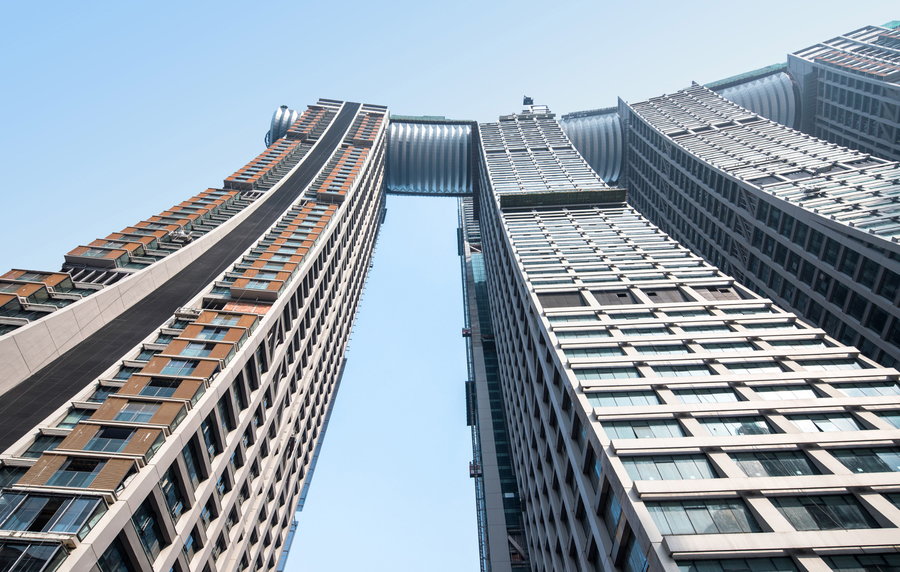 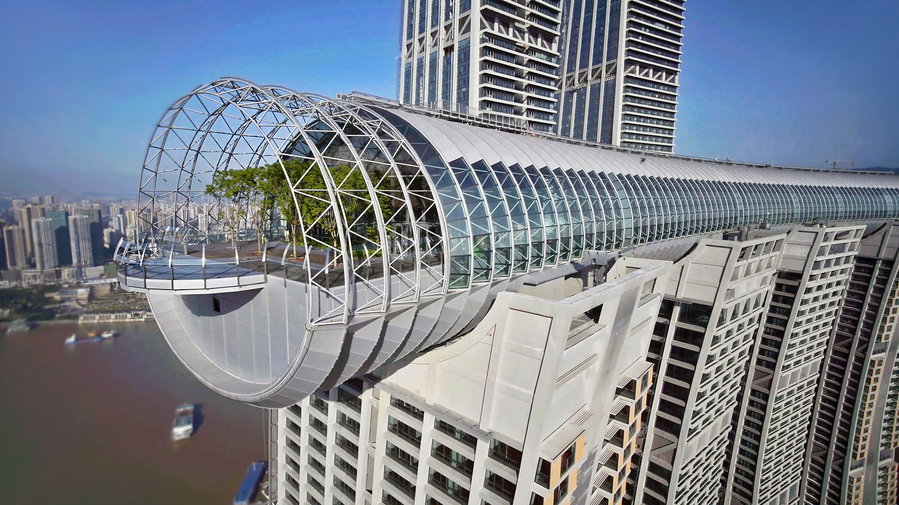 “Projects of this scale and density can easily be overbearing and imposing, impenetrable and seeming to turn their back on the cities of which they are a part,” says Safdie. “Raffles City Chongqing, although vertically organized into a series of towers, strives to connect to the city’s existing network of streets and systems. It also transforms the site podium into a network of public and open spaces. Additionally, a sky conservatory, which bridges between four towers, draws the active public life high up into the project.”

“This historic site in Chongqing is located at the center of the city, in the heart of a densely developed existing city infrastructure,” says Safdie. “We carefully studied and incorporated the city street organization, engaging the historic shopping streets and using their organization to help arrange and bring order to the complex programming of the project.” 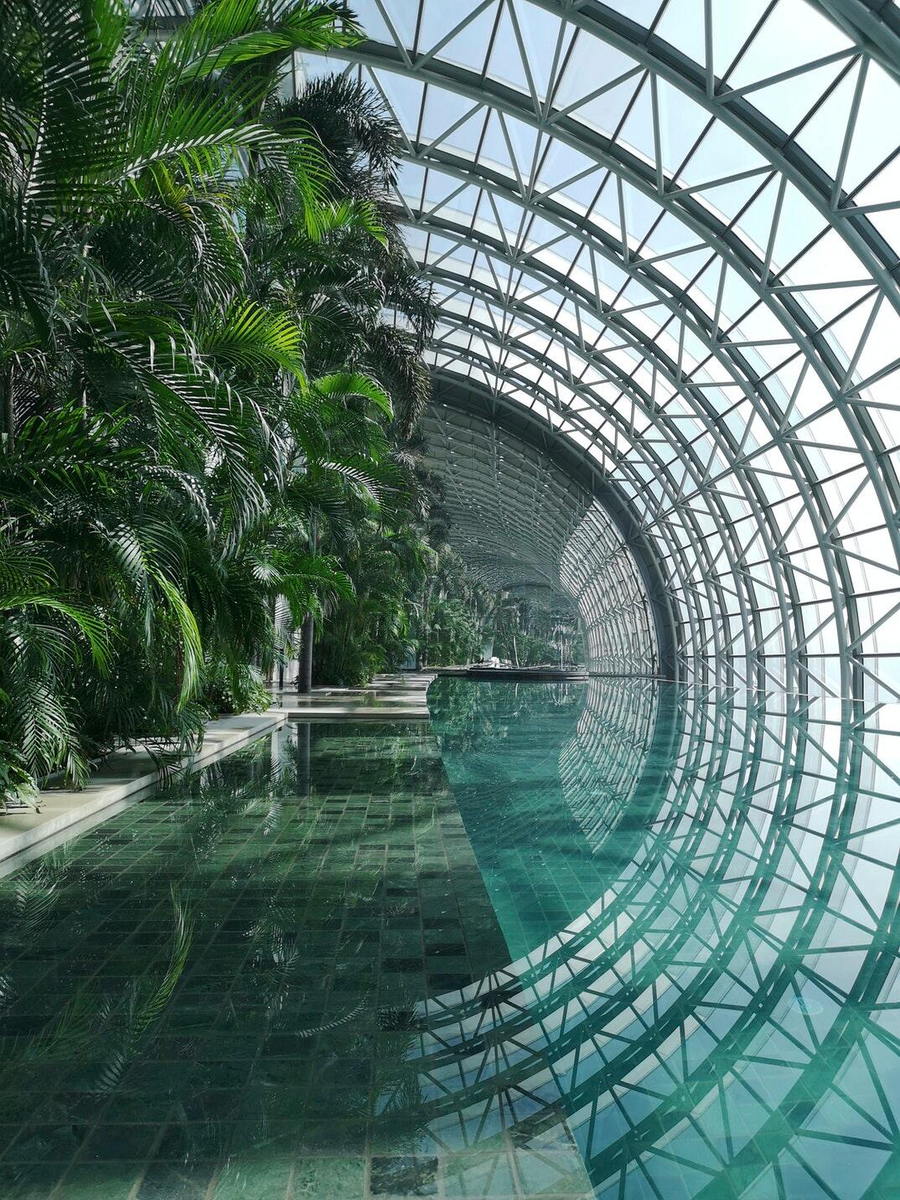 Safdie took inspiration from the area’s waterway transportation culture, envisioning the overall structure as a giant sailboat, with the two tallest, most prominent skyscrapers slightly curved against the wind as the complex points its nose into the water. As you may recognize from its shape, it’s also reminiscent of one of Safdie’s best known projects, Singapore’s Marina Bay Sands hotel. 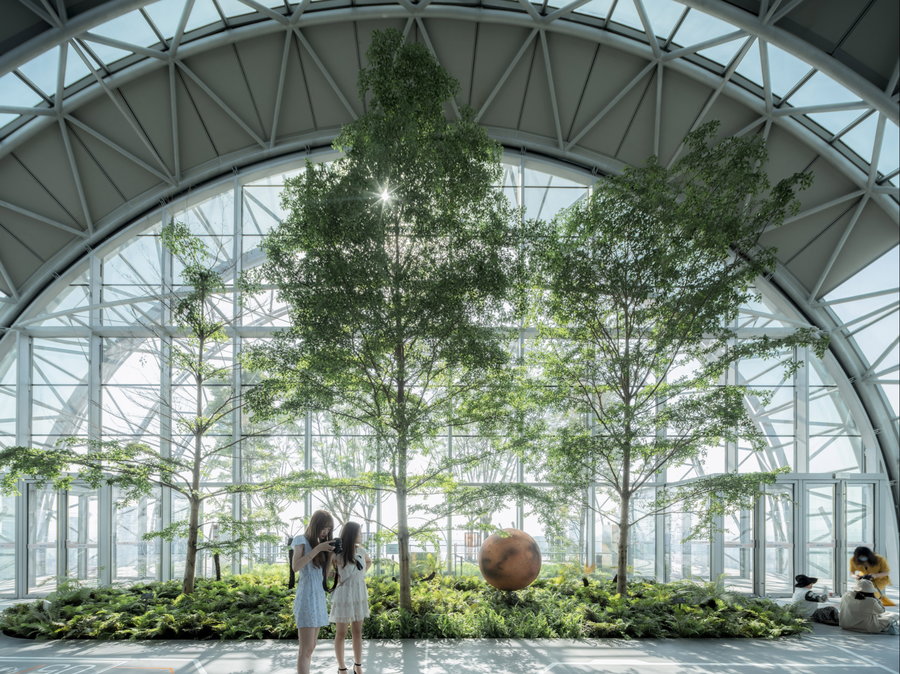 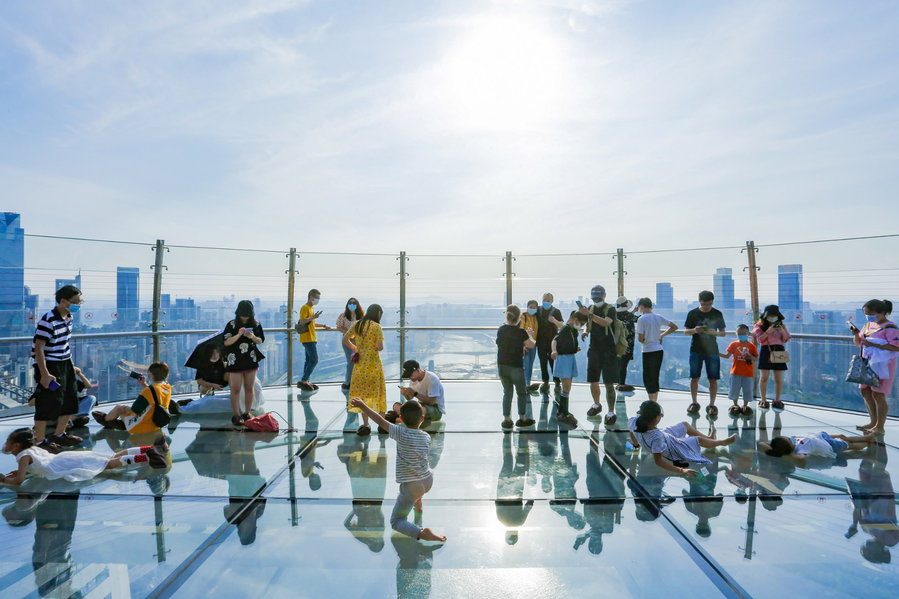 The skybridge, also known as “The Crystal,” transforms into a giant beam of light after dark, illuminating the sky with nightly light shows. It features the glass-bottomed “Exploration Deck,” which juts out at one end, and two additional aerial walkways connecting it to other skyscrapers. Tickets to experience The Exploration Deck, the first major attraction to launch in Chongqing since the lifting of the country’s nationwide lockdown, sold out almost as soon as they were made available. 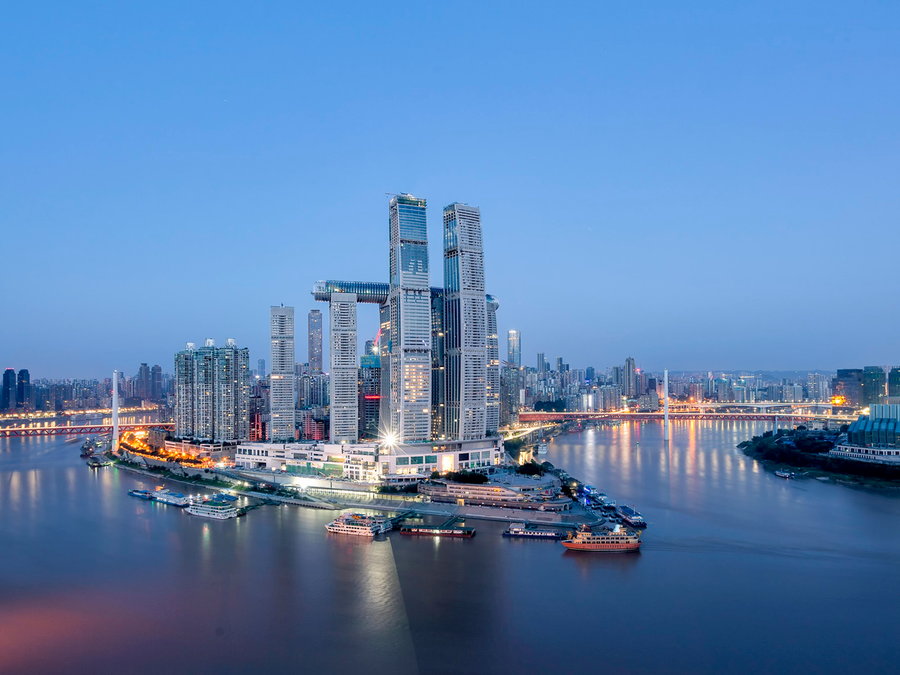 “More than just a building, Raffles City Chongqing is a landmark urban renewal project that expresses and shapes Chongqing’s global city aspirations,” says Lim Ming Yan, President and CEO of CapitaLand Limited. “As the master planner of this important site, CapitaLand fully appreciates the historical and cultural significance of Chaotianmen [bridge] to the people of Chongqing. We have thus gone to great lengths to imbue the project with the highest standards of livability, connectivity, and sustainability by carefully studying the needs of the community and the unique attributes of the site. Our goal is to create a vibrant riverfront urban district that serves as a dynamic city gateway befitting of Chongqing’s growing economic influence.”