The kitchen is the heart of the modern home in 2020, but it hasn’t always been that way. In fact, early homes had no real designated space for cooking and eating, with families relying on nothing more than a table near the fire. Then, with the introduction of modern appliances like the refrigerator, the world saw the need for personal spaces where food could be cooked, eaten, and stored all at once.

Throughout it all, kitchen design has evolved based on trends and needs. What once was a rustic and functional part of the home, is now a vital space for entertaining, gathering, and food exploration. Of course, other rooms in the home have also undergone changes with the introduction of things like indoor plumbing. But the kitchen has perhaps seen the longest list of innovations in the form of appliances, structural requirements, and interior design.

Interested in tracking this unique evolution, the creative team at HomeAdvisor recently did a deep dive into the past 500 years of kitchen design. They then put together a digital compilation of all the changes they observed over that time. 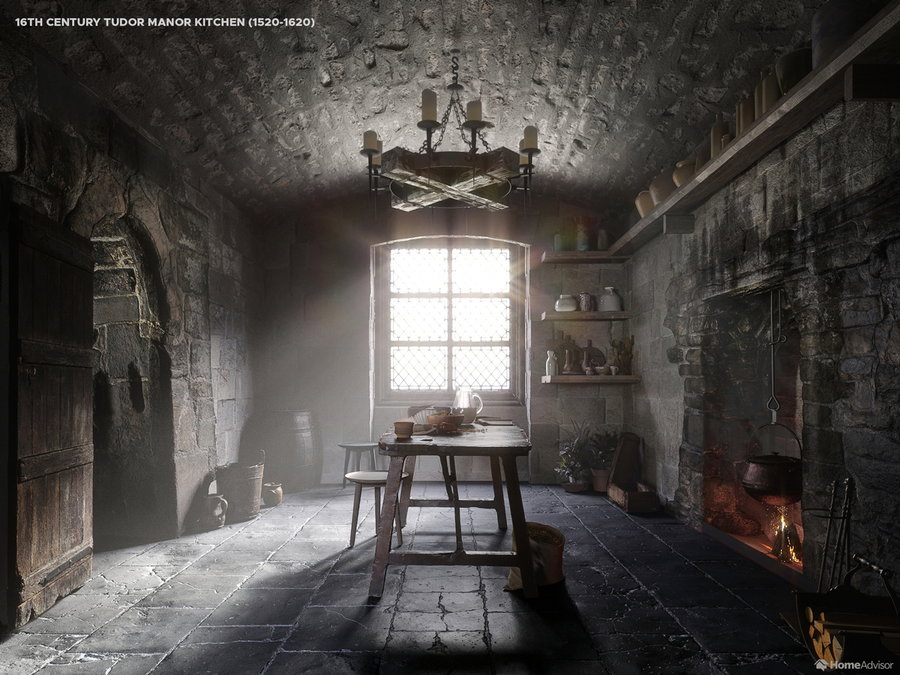 For accuracy, the HomeAdvisor team worked with noted historians Sara Pennell, Senior Lecturer in History at the University of Greenwich and author of The Birth of the English Kitchen, and Nancy Carlisle, Senior Curator of Collections at Historic New England. They then began with a kitchen in England circa 1520, moving to America as the new world evolved and bringing the interiors all the way into modern times.

The first example is a 16th-century Tudor manor kitchen (1520-1620), whose cold stone walls are counterbalanced by the warmth of the multifunctional fireplace. Cast iron frying pans and a quintessential cauldron above the fire show the nature of cooking during these times, while ceramic pots, the primary means of storage then, line the shelves. Nearby, a wooden trough functions as a bread-making station. 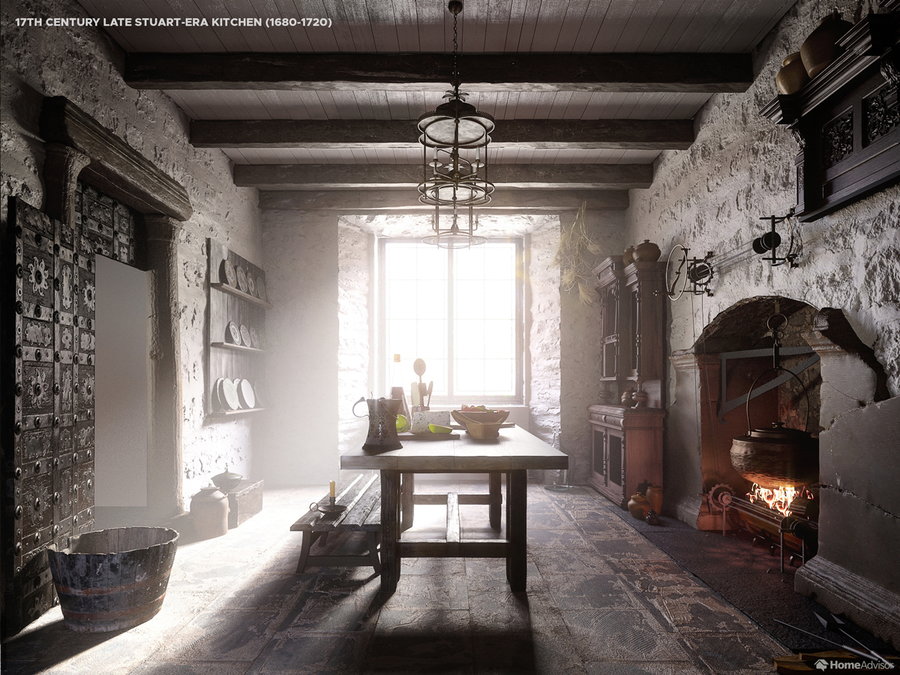 Next, the 17th-century Late Stuart-era kitchen (1680-1720) boasts improvements in overhead candle lighting, storage, and display options. Teacups grace the space as afternoon tea becomes more common, and a cast iron coal gate makes the hearth more efficient to use. Another new device called a mechanical roasting jack was set up with a series of pulleys and weights that would automatically turn the spit inside the hearth, freeing up the cook for other tasks. 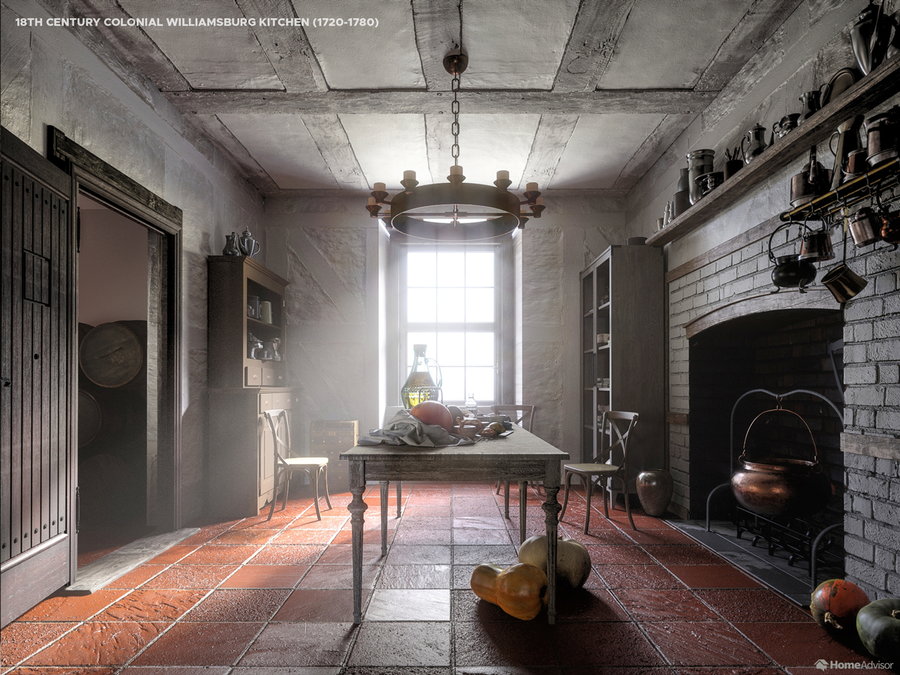 With the 18th-century Colonial Williamsburg kitchen (1720-1780) comes another light fixture upgrade and the advent of tile flooring, along with newer hearth features such as a swinging iron crane used for supporting Dutch ovens and other cookware. 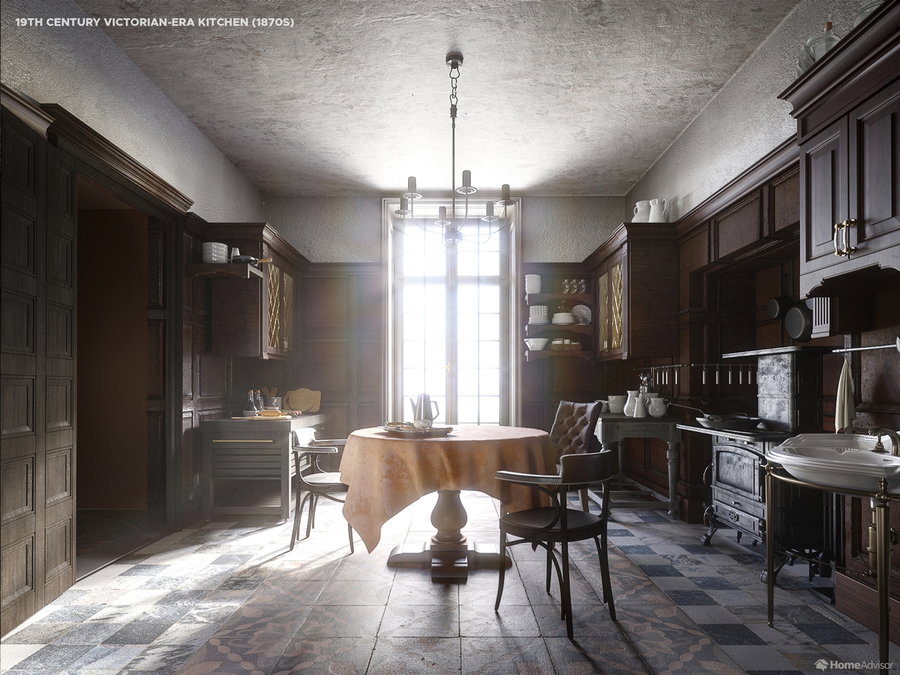 The 19th-century Victorian-era kitchen (1870s) features the very obvious addition of modern cabinetry used for storing food and other cooking implements. Another innovation is the wood or coal-burning stove as a replacement to the traditional hearth. Not only is this form of cooking infinitely more efficient, but it also spares the cook from stooping over the fire. The kitchen sink was another enhancement of the century, although it still wasn’t the critical component it is today. Ceramic is still the storage option of choice, although much of it is now housed inside the cabinets. 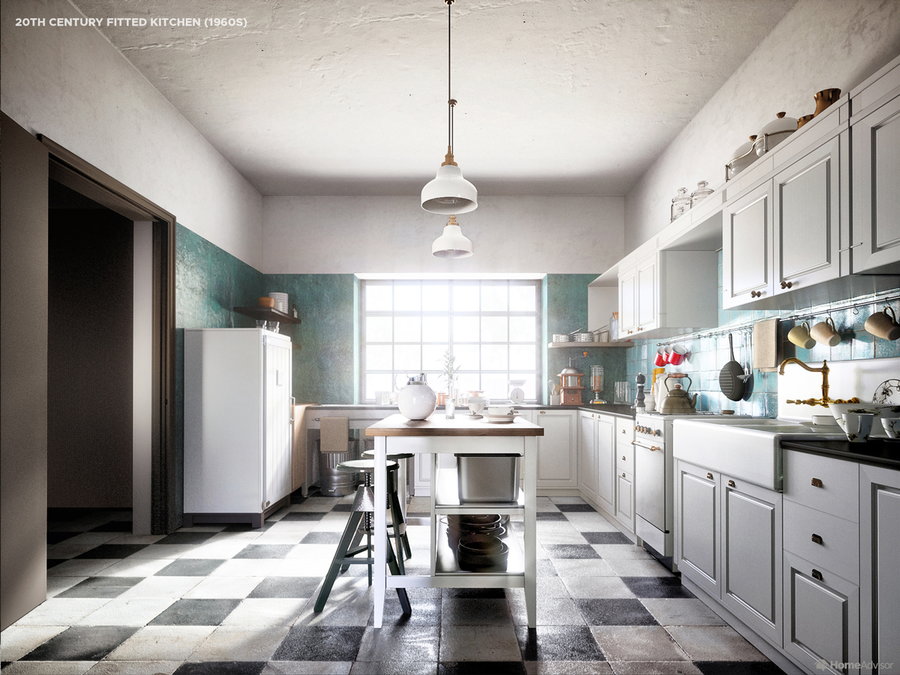 In the 20th-century fitted kitchen (1960s), electric appliances and other conveniences finally enter the scene. An electric refrigerator offers storage for perishable goods, and the gas range modernizes the cooking experience. Plus, new materials for counter and floor coverings make the space easier to clean. Even small appliances such as toasters and coffee pots change the face of the kitchen during this time. 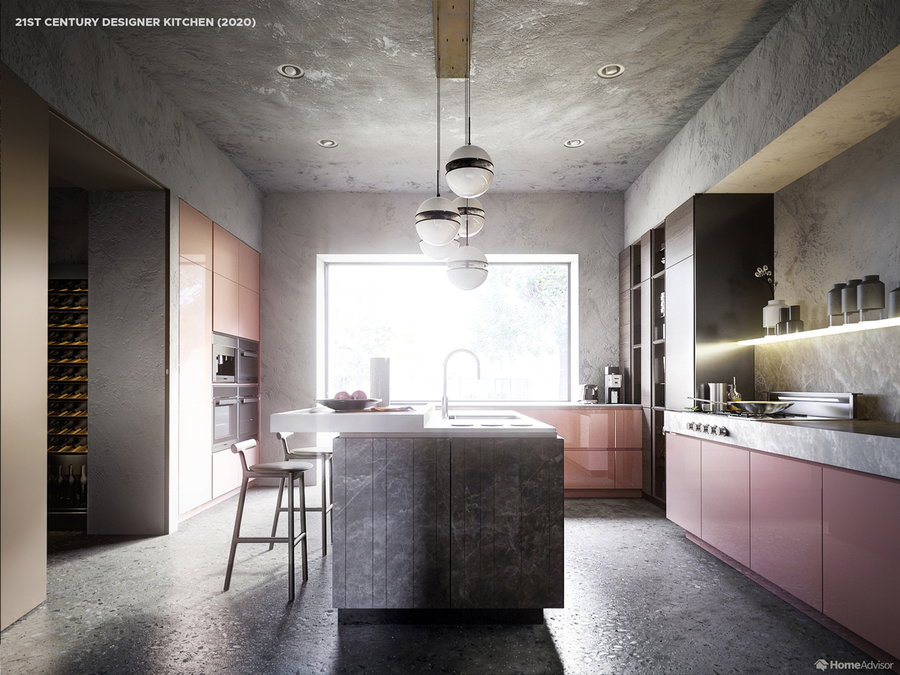 Jumping into the 21st-century designer kitchen (2020), we see ultra-efficient and streamlined design coupled with copious entertaining and gathering space.

Check out a visual compilation highlighting all 500 years of kitchen design with HomeAdvisor’s official video on its evolution.

All photos and videos courtesy of HomeAdvisor