It is a bit like the perfect self-contained hemispherical world of Truman Show, but in real life … and times four. Once constituting the largest gasworks in all of Europe, a series of stunning cylindrical brick structures from the 1800s have found an uncanny new use in modern times as a completely domed-interior town-within-a-city on a spectacular scale. In their second life, these gasometer buildings have been converted into a giant community of shops, residences, hotels, entertainment, civic, public and garden spaces interconnected by a series of soaring skyways and uncanny underground passages. Located in Vienna, Austria, these century-old buildings were abandoned shortly after construction as they were no longer needed to hold coal gas – leaving each of the four industrial structures with nearly 1,000,000 square feet of unused interior space under gigantic roof-spanning skylights above – but it would be nearly a hundred years until someone would think to turn them into a town. Though used and abused over the years by subversive partiers and other illegal purposes, the buildings managed to avoid being torn down due to their impressive appearance, stunning scale and historical value. 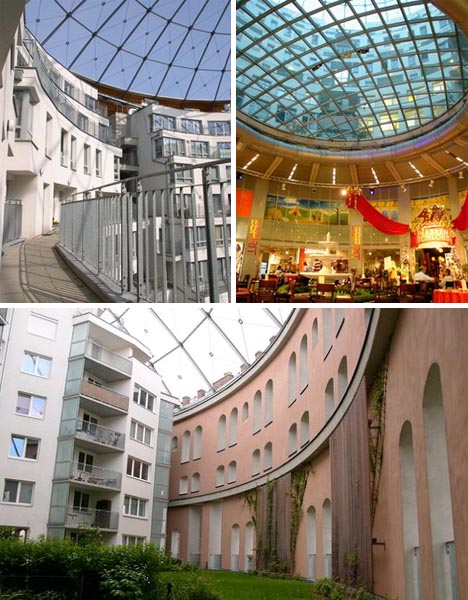 The interiors vary from one 230-foot-tall structure to the next, giving them each a distinctive appearance and functional personality. With over 1500 residents and 70 shops, restaurants, bars and cafes, it is no wonder that urban designers and planners from around the world have studied the unique architectural and cultural phenomena and the virtual online community that has arisen out of this giant connected gasometer city.