Earlier this year, Spanish artist Mario Mankey installed two huge concrete feet in an abandoned bank in Berlin. The sculpture forms part of a collective exhibition by over 160 artists, who were all invited to make their respective marks on the disused building. The project, entitled “The Haus,” was conceived of as an initiative to transform the derelict bank, which is currently slated for demolition, into an ephemeral art gallery — one that won’t be recreated when the building is gone. The occupation of the bank began in January of 2017 and ended in May, and over the four months that the pop-up installation was active, the artists filled the building with sculptures, visual art, graffiti, and lettering.

Mankey’s enormous sculpture is of two feet that have crashed through the ceiling of the room and planted themselves firmly on the ground. Complete with debris from the fallen plaster lath roof, the feet stand in apparent permanence, creating an atmosphere that contrasts the exhibition’s temporary nature. Entitled “Ego Erectus,” the work fits neatly into Mankey’s oeuvre, which has been described as manifesting “the underlying contradictions between humans and primates. He works with human behaviors that he finds disturbing, focusing mainly on the eternal contradictions of the modern individual as a result of their ambitions and limitations.” Mankey uses sarcasm to create a dialogue in his work, and he works across many different genres, from sculpture to street art to more formal paintings on canvas. 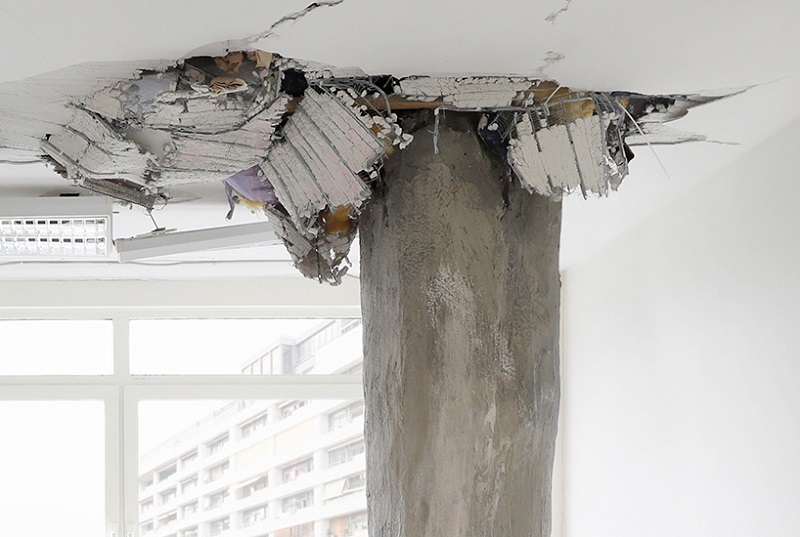 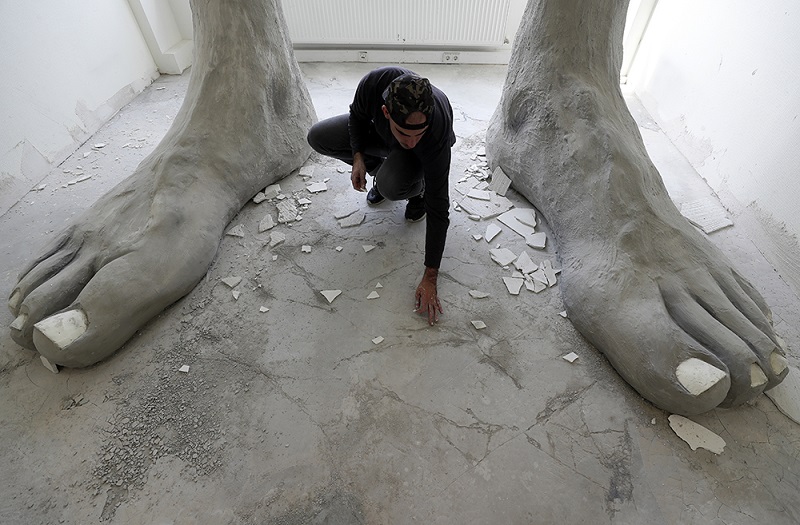 The feet allude to a greater being above the limit of the ceiling and play with the viewer’s perception of scale, putting them in contact with an element familiar to their own body but distorting it to the point where it takes on a different meaning. The legs and feet are sculpted crudely in concrete and make no attempt to be hyperrealistic, as is the case with large-scale corporeal artworks by artists such as Ron Mueck. The rawness of this type of artistic expression gives the piece an immediacy and harkens back to Mankey’s interest in more primitive beings, forming a connection between humans and a less evolved version of them that bears the same characteristics. The sculpture was removed once the exhibition ended and the building was being prepped for demolition, but its footprints remained as a sliver of remembrance. 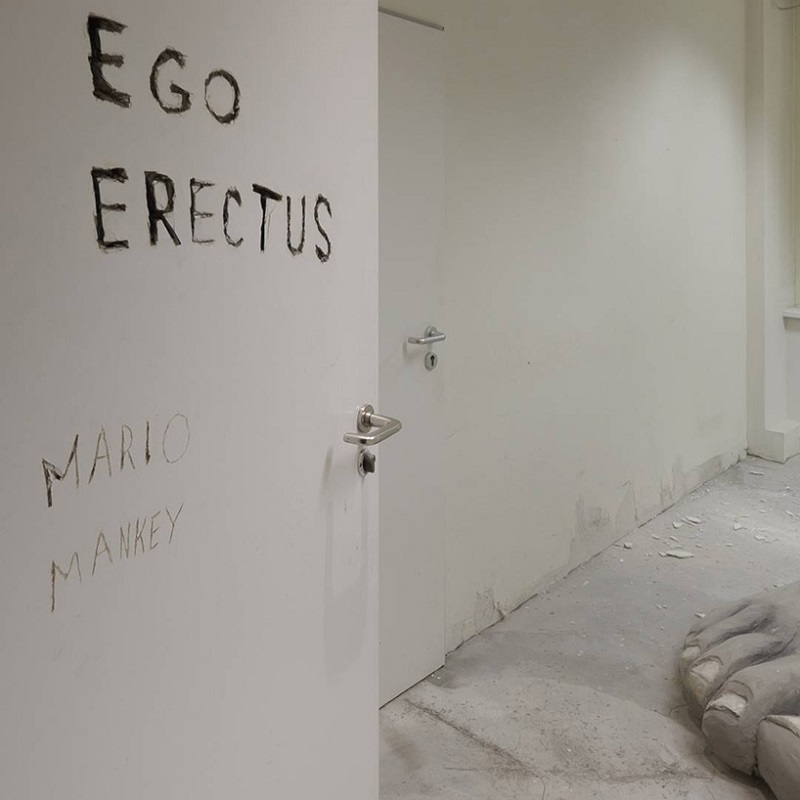 Continue reading below
Our Featured Videos
Among the other artists who contributed to The Haus project were Gogoplata, a Berlin-based street artist whose goofy characters straddle the line between illustration and graffiti, and Felix Rodewaldt, whose trippy geometric compositions graced the hallways of the building and fused architecture and art by messing with spatial perception. Art collective Tape That use colored electrical tape to create an impressive array of dynamic works, and Wizet brought his special brand of highly realistic, figurative art (which has a definite graffiti influence) to the table. With the recent completion of his graphic design studies, Wizet’s punchy style was all the more impactful in the exhibition. The Haus was a huge success, and while it may be gone, you shouldn’t expect these artistic invasions of soon-to-be-demolished spaces in Berlin to stop anytime soon!