A staircase is just a way to get from one level of a building to the next, right? Sure — except when it doubles as an oversized sculpture, accenting and even dominating the space’s interior design. In most cases, architects are aiming for the more common effect, adding a little bit of visual interest to their staircases with floating treads, a spiraling shape, or a splash of color. Still, it’s cool to see designers throwing caution to the wind and just allowing this functional and decorative structure to define the mood of an entire building. 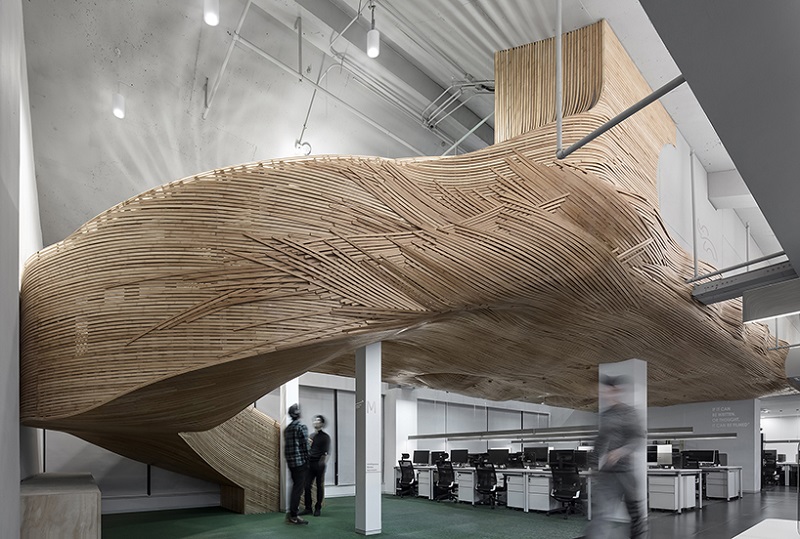 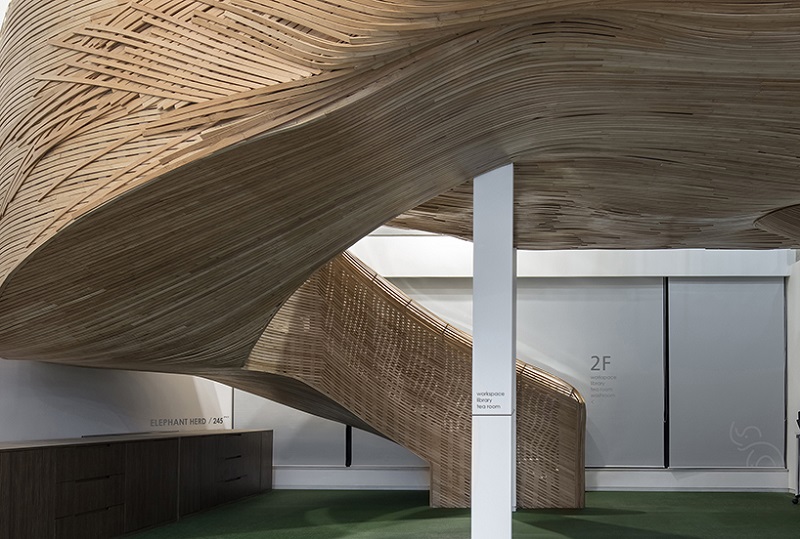 Few staircases are quite as bold as this bamboo number, which was designed by Cui Shu of the Beijing-based firm Cun Design. Rising from the center of the ground floor like an organic growth and swirling upwards, it’s almost parasitic in its appearance, as if it attached itself to the existing columns in the room and began to feed off of them. Overlapping lengths of bamboo adorn its curving form in a symmetric and orderly fashion in some areas, but their arrangement becomes wilder and looser in others. 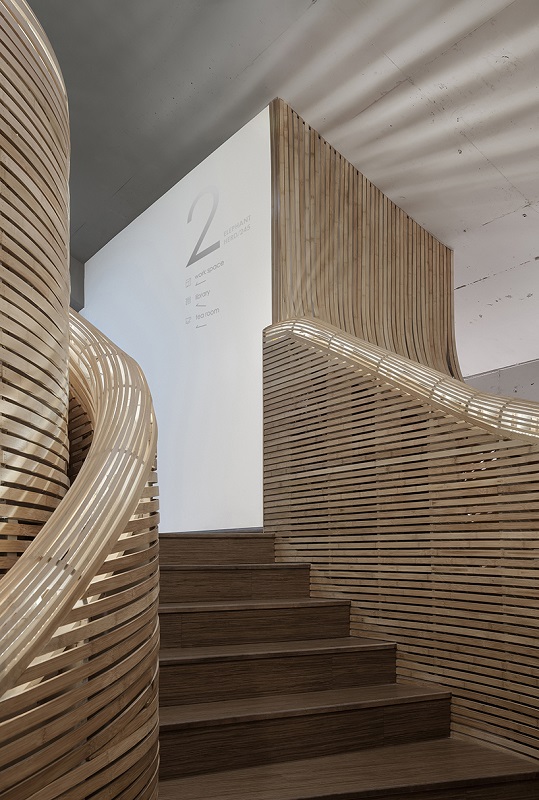 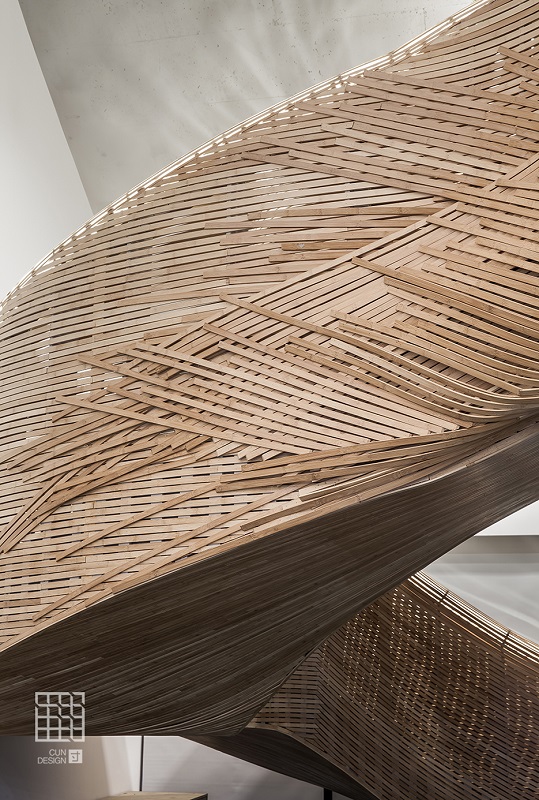 The staircase presides over the redesigned headquarters of Elephant Parade, a social enterprise that handles the world’s largest exhibition of decorated elephant statues (which might explain its mammoth proportions). It’s interesting to see how the architects chose to take such a restrained approach to every other aspect of this renovation project, adhering to more or less conventional ideas of how an office should look. By contrast, the fluid bamboo structure feels like an explosion of pent-up creative energy that’s only been allowed to flourish in one spot. 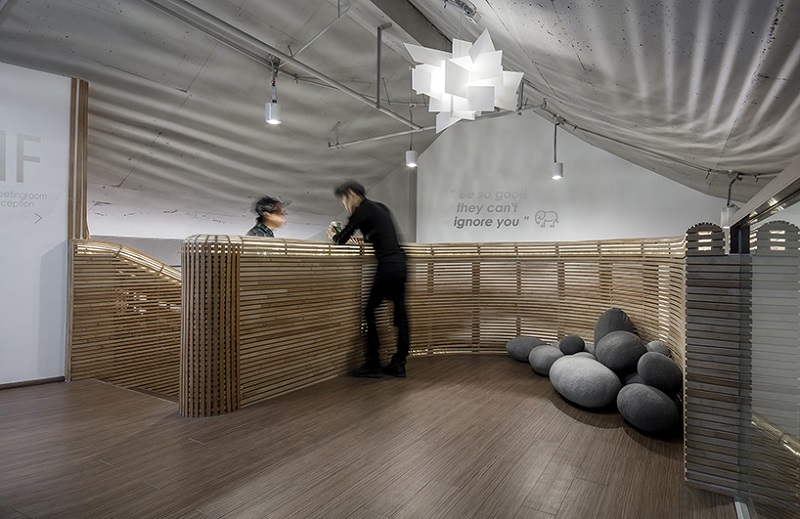 Noting that people have been getting tired of the same old architectural tropes in offices, like an abundance of concrete and glass, Cui Shu deliberately chose bamboo for its warm tones, organic textures, and the visions of nature conjured by its appearance. The staircase itself takes on a sense of vitality, attaching itself to the underside of the lofted second story and giving off the impression that it might not be done spreading through the space. Its lines continue straight up to the ceiling and curve around the wall. 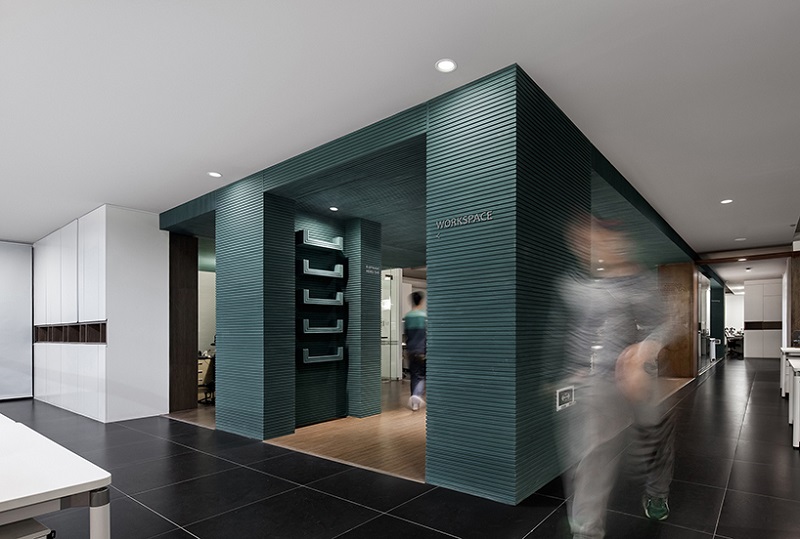 Bamboo is incorporated into other areas of the office, too, lining many of the building’s workspaces. Dark, hunter green bamboo paneling corrals cubicles and lines the walls and ceilings of meeting rooms. Nearly every floor in the office has also been clad in bamboo, including that of a meditation room that overlooks the Beijing skyline. 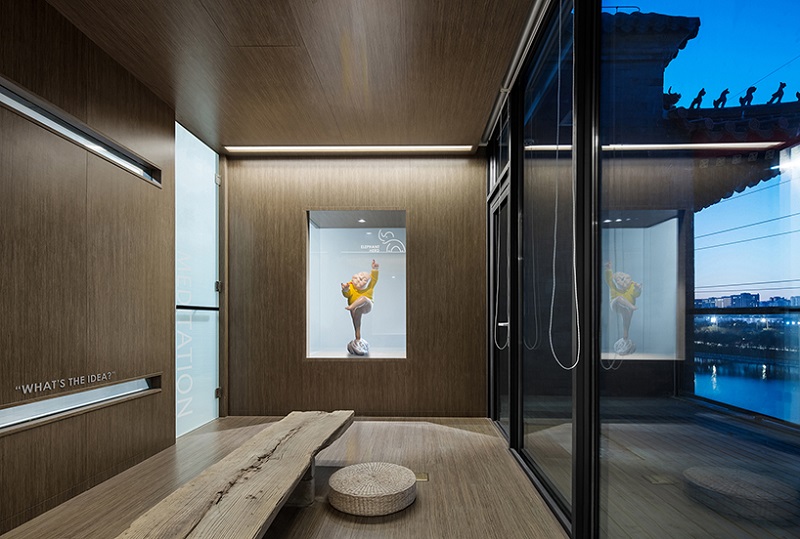 The aim, according to Cui Shu, was to use the dramatic silhouette of the staircase to establish a sense of flowing rhythm. The staircase represents a shortcut: a means of rapid ascent and descent between states of mind and physical spaces. It connects orderly rows of workspaces to a relaxation room, where employees can let loose on green carpeting and oversized felted wool “stones.” 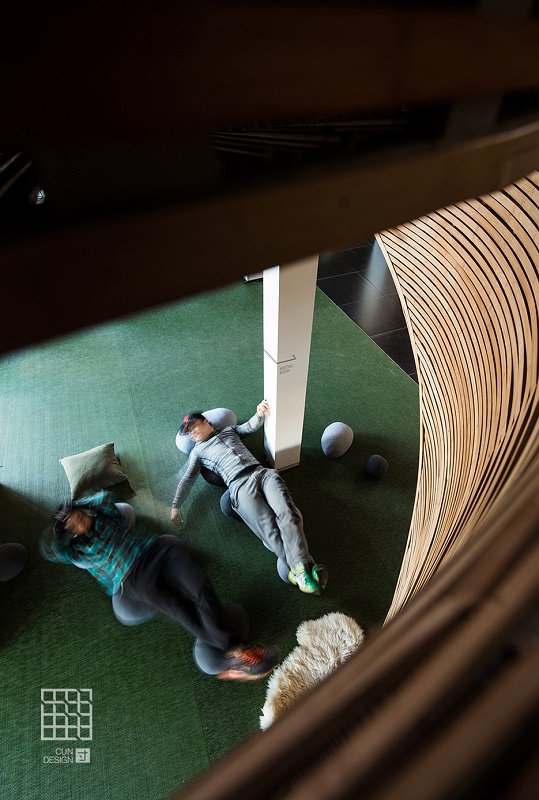 The firm explains that in a successfully-designed office, there’s space for anyone to work, think, imagine, and collaborate, whether they need cheerful common areas or quiet, private refuge. Modern work life often encourages leaving rigid schedules behind, so maybe we should start leaving rigid structures behind, too.