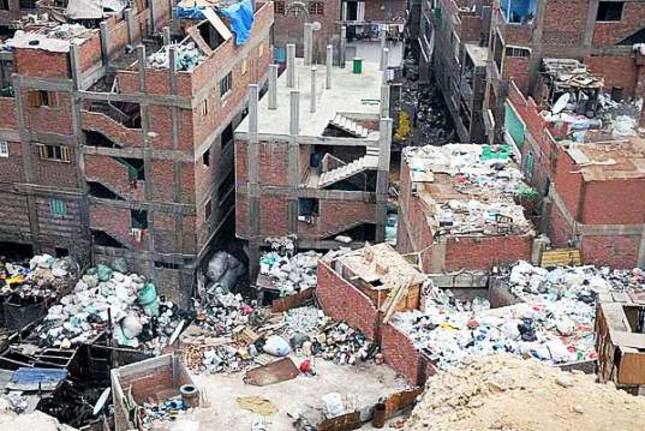 No, it is not just trash talk or slang for some city slum – this place really is known as Garbage City with good reason: its denizens live in a surreal urban landscape with waste stuffed in every spare corner, stacked on the sidewalks and surrounding every structure – captured above by photographer Bas Princen. 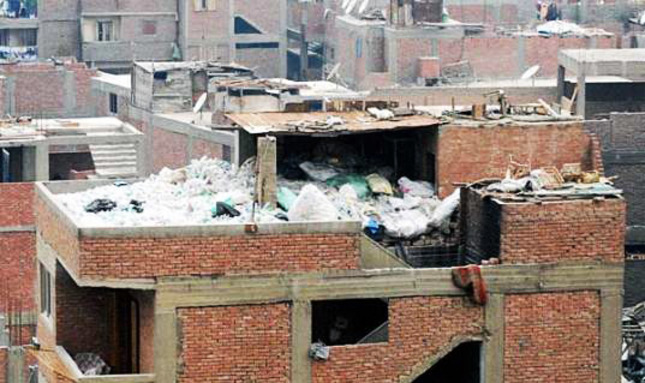 More amazing than the trash-strewn architecture and garbage-stuffed city streets is the strange fact that this place is fully occupied and abuzz with activity. People live, work, eat and sleep within this object graveyard outside the city center of Cairo, Egypt. Spaces not occupied by people are given over to livestock (fed with trash scraps) and guerrilla urban gardens.

Officially known as Manshiyat Naser, this district has shops and apartments like any other, but its residents earn their keep by specializing in collecting, sorting and recycling specific types of trashed materials. A group of children can be found sifting for plastic bottles while an organized team of women scours the remnants for cans or glass. Other items are burned locally as fuel.

While it might not meet any health standards on Earth, the unique urban phenomena is arguably sustainable in a certain sense – even ‘green’ in a some ways. Working in the area does provide some basic necessities for its inhabitants, though water, sewage and (perhaps ironically) even official garbage collection services are not available to those living within its trash-cluttered walls.

“The city’s garbage is brought to the Garbage City in Manshiyat Naser by the Zabbaleen (garbage collectors), who then sort through the garbage to attempt to retrieve any potentially useful or recyclable items. As a passerby walks or drives down the road he will see large rooms stacked with garbage with men, women or children crouching and sorting the garbage into unsellable or sellable.”

“Families typically specialize in a particular type of garbage they sort and sell — one room of children sorting out plastic bottles, while the next of women separating cans from the rest. Anything that can be reused or recycled is saved by one of the numerous families in Manshiyat Naser. Various recycled paper and glass products are made and sold from the city, while metal is sold by the kilo to be melted down and reused. Carts pulled by horse or donkey are often stacked 2.5 to 3 m (8 to 10 ft) high with the recyclable goods.” – Wikipedia