Erika Marthins, a Swedish designer and recent graduate from ECAL University (Bachelor Media & Interaction Design), has recently combined a series of different technologies with food to create three edible desserts that make noise, refract light, and move. Made as part of Marthins’ final school assignment, “Déguster l’augmenté” consists of a chocolate record, a light-refracting lollipop, and a moving gelatin dessert. 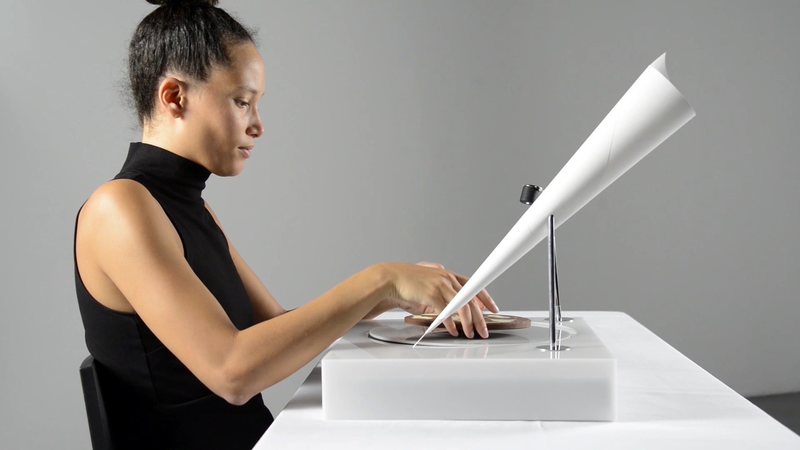 Hoping to put her own spin on the sensory experience of eating, Marthins utilized engineering, science, light-forming technology, and computerized data information in the creation of each dish.

“Augmented food brings a new dimension to a dish, something that I think could be opened up as a new practice, one that is different to molecular cuisine,” she explains. “I wanted to create a different personalized experience that changes our idea of how to eat and consume food, and also of our relationship with technology.”

The first dessert expands data in a poetic way using sound. Eating a vinyl record made entirely from chocolate, diners will be given a unique chance to both hear and taste sound. When the needle touches the moving surface of the chocolate disc, a high-pitched noise is formed. Designed by Mange Disque, the music recalls the space-age sounds of The Tornados’ “Life on Venus.” 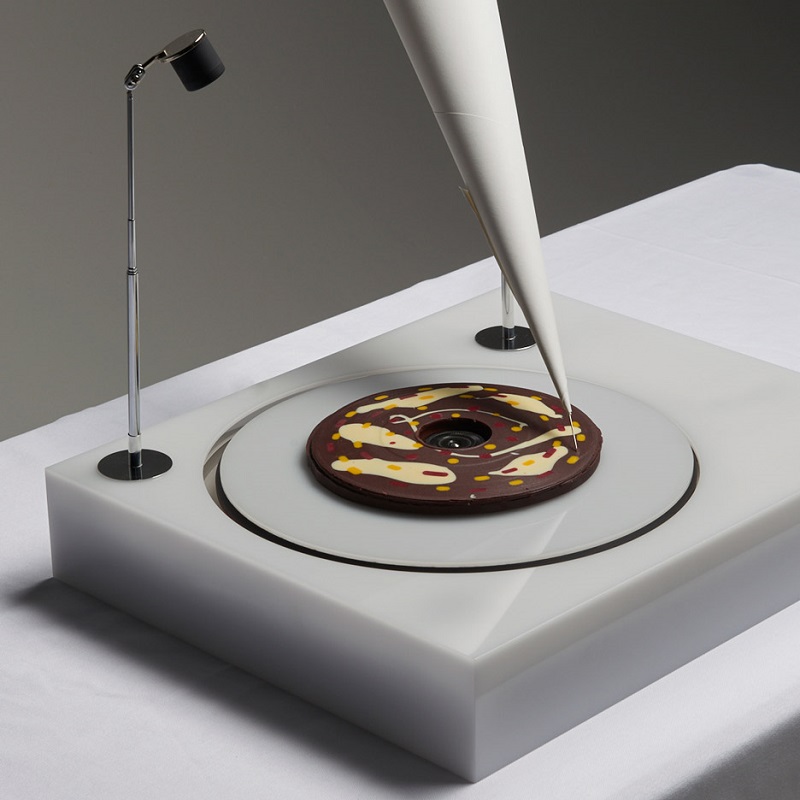 “The really beautiful thing with the chocolate … is when you actually play it, since it wraps off a bit of the chocolate, it has this smell as you listen to it,” Marthins says. Of course, if you hold the chocolate record in your hands for even a touch too long, it’ll probably start to melt.

“Dessert à l’Air,” an animated purple dessert, is the name of the second sensory dish. It consists of three-dimensional gelatin cubes mounted on a circular surface. No electronics were used in the process of making Dessert à l’Air, making it completely edible. Nonetheless, the dessert relies on actuators (also made of gelatin) to create movement. When in motion, its cubes spread out, resembling octopus tentacles. 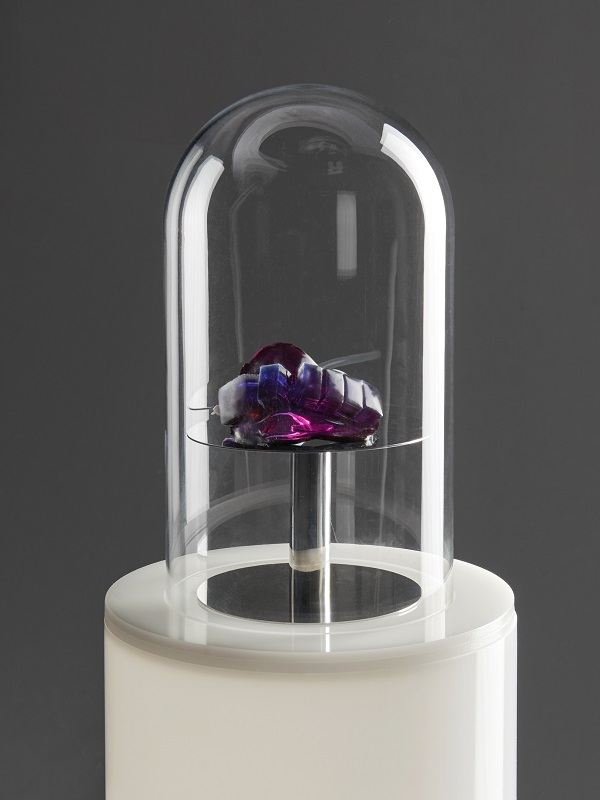 Focusing on perception in her last dessert, Marthins chose to embed a concealed message inside a lollipop. Once a source of light is directed through the sweet, the note reads: “Lumière Sucrée.” To create this, Marthins collaborated with tech company Rayform, who used its light-shaping technology to modify the surface of the lollipop. The surface layout was calculated with computer algorithms to produce the desired image on the candy. The inscription first appeared in a 3D file that was assembled analytically onto the lollipop’s face, causing light rays to be redirected when they hit the clear exterior and cast an image onto the background surface. 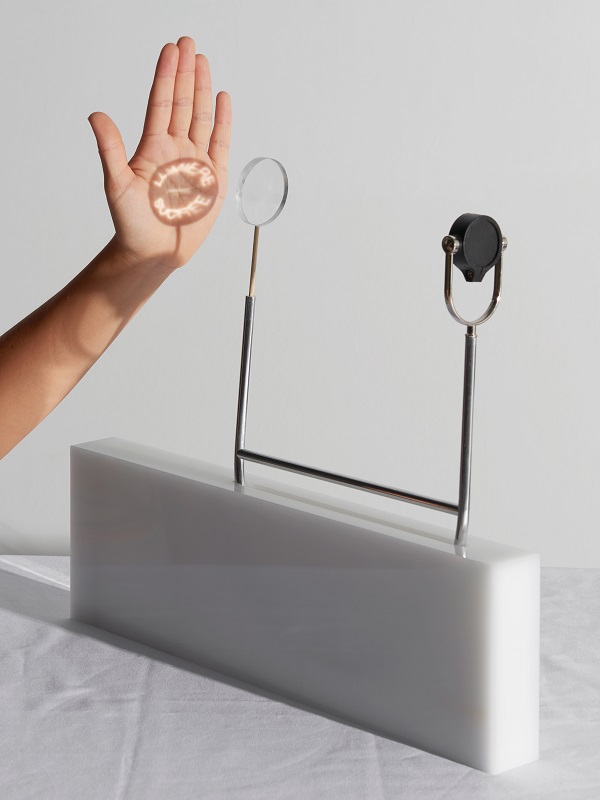 Marthins teamed up with the Ecole hôtelière de Lausanne’s Chef Fabien Pairon to brainstorm aesthetics and tastes for these three unique sweets. She also collaborated with the Laboratory of Intelligent Systems‘ Jun Shintake to bring the enlivened gelatin dessert to life. 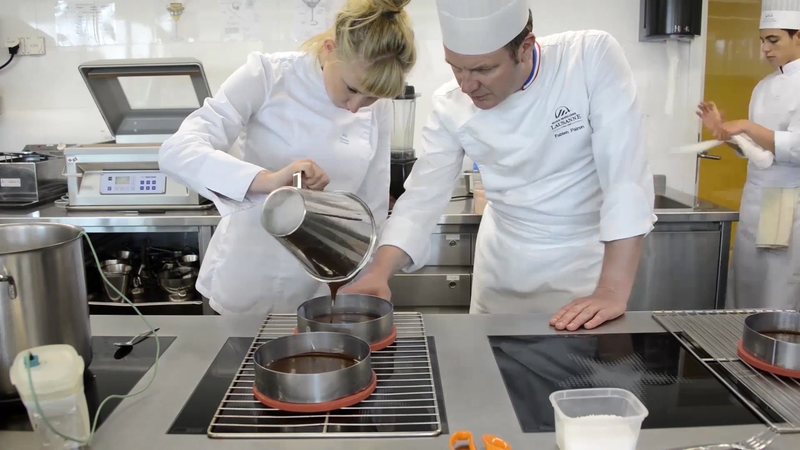 For Marthins, Déguster l’augmenté’s being a temporary experience only adds to the appeal of the desserts. In fact, the vinyl was specifically created to spin only once (otherwise, the needle starts to crush the sound waves inside the chocolate). “When you eat something, you only see it once,” she says. “You should appreciate the moment when you do something. It becomes almost a holy moment.”