Unveiling its ready-to-wear looks for the upcoming year, French fashion house Balenciaga premiered a line that looks like something out of a dystopian sci-fi novel. 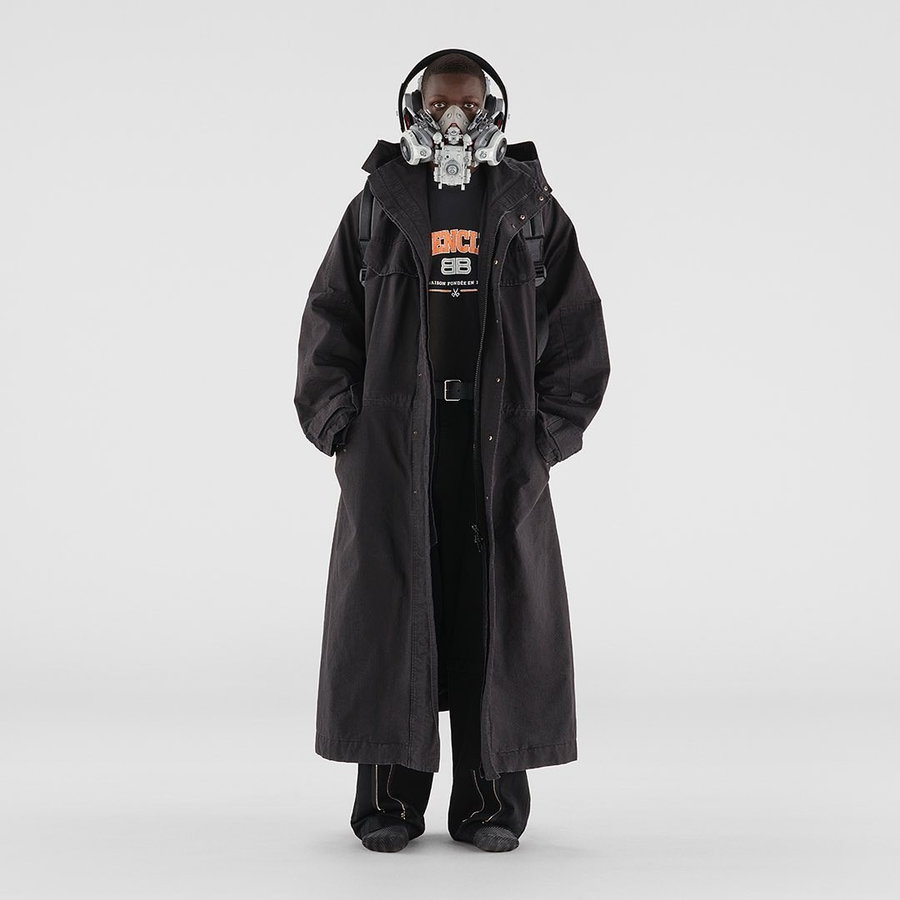 Balenciaga’s Spring 22 collection features wide-legged pants full of rivets, overstuffed jackets, trench coats galore, and garments that brush the floor with their length. If the baggy, puffy silhouettes of these pieces are any indication, it looks like the future is going to be a very cold place. 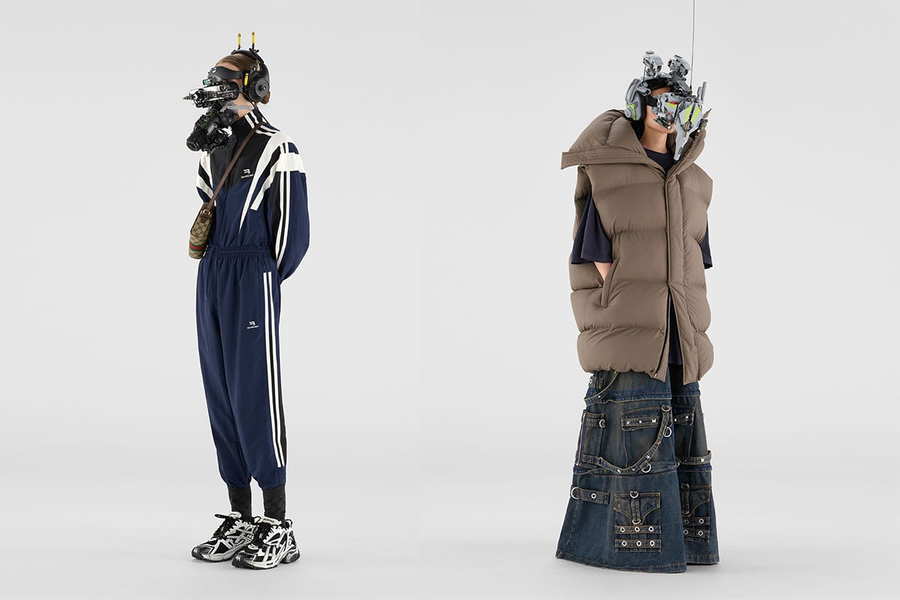 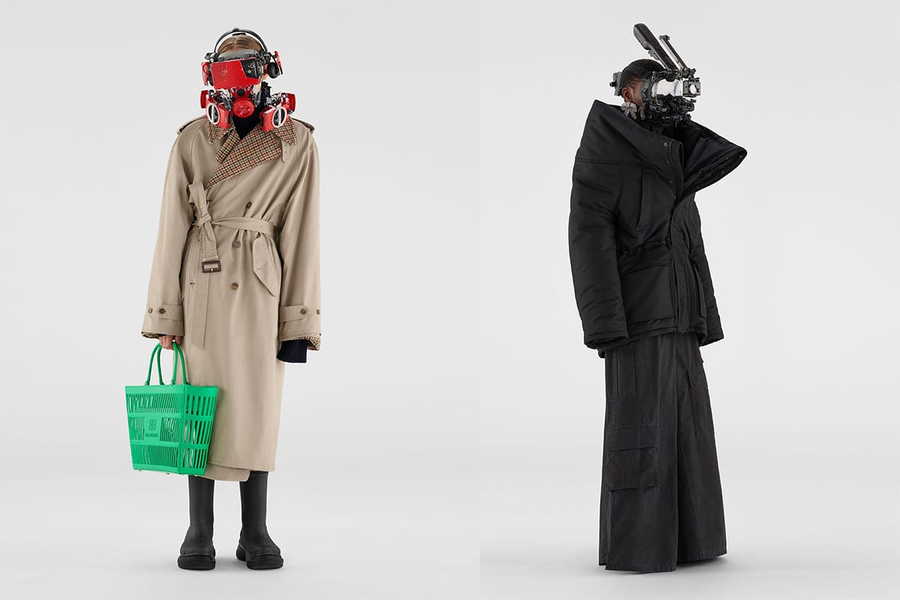 But the real scene-stealers of Balenciaga’s new fashion look book are the robotic masks added to every outfit and the exoskeleton suit designed by Japanese cybernetic artist Hiroto Ikeuchi.

Photographed by Andrea Artemisio, pictures posted on the company’s Instagram page show face and head pieces constructed from electronic odds and ends like cameras, Bluetooth headphones, virtual reality glasses, phone cases, and telescopes. Some masks completely encompass the head while others let only the eyes peek through. 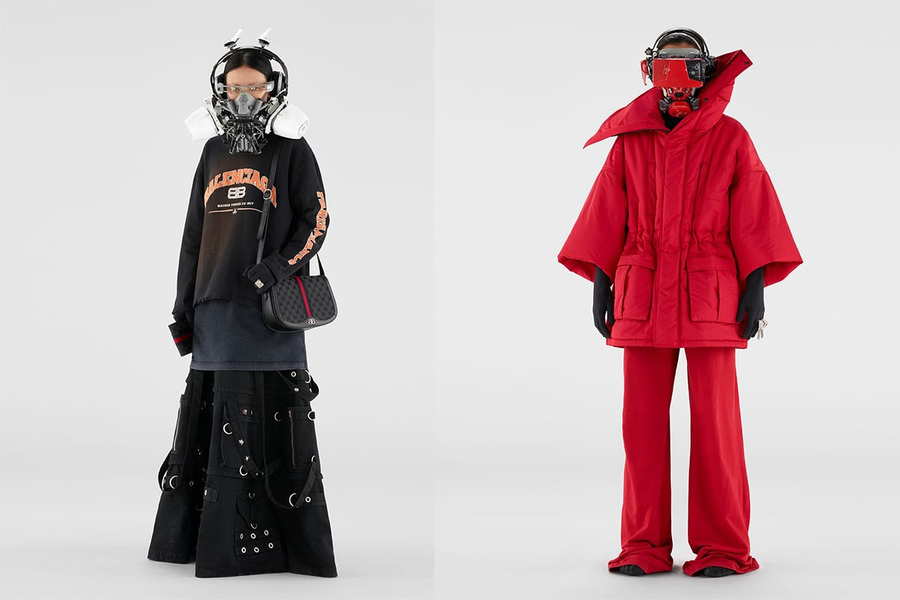 In one sense, designer Ikeuchi’s headgear is a statement on the lack of privacy in today’s hacker-filled world, giving “us the ability to protect ourselves from new threats such as face recognition by hiding our eyes,” he said in an interview with CYBR magazine.

Alternatively, these masks could also be hinting at the fact that humans are so dependent on technology now that we will even allow it to provide our daily view of reality. Or perhaps the face coverings are expressing a desire for a time when homo sapiens will be fused and enhanced with tech, becoming something like super versions of themselves. 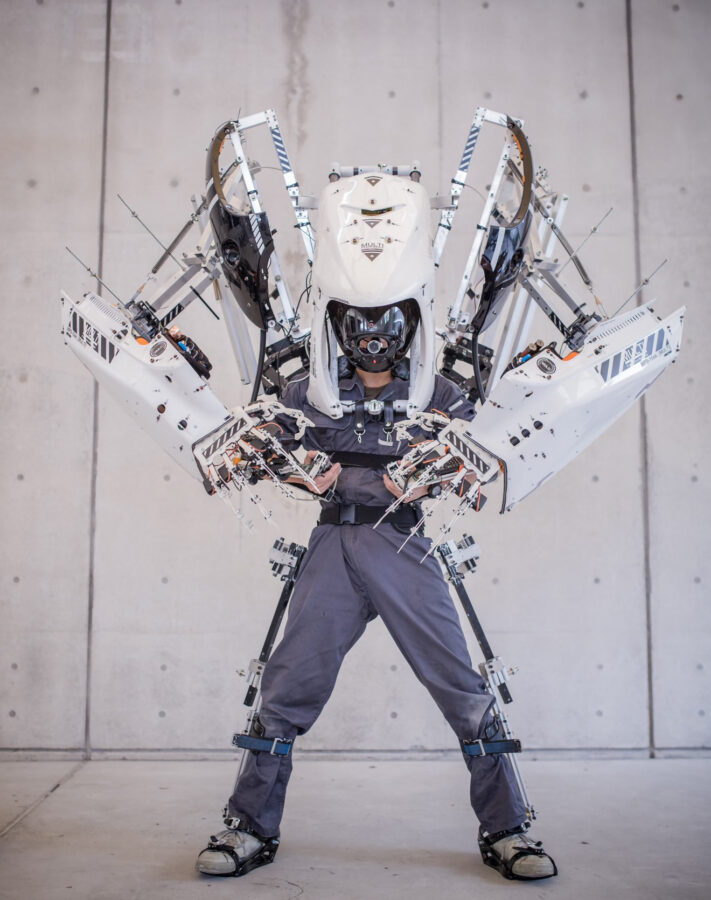 And then there’s the real show-stopper: Ikeuchi’s exoskeleton. Manufactured by robotics firm Skeletronics, the suit consists of a white metal frame that wraps over the head and shoulders and extends into an extra set of mechanical arms for the wearer. Named the MPS-15sk “Multi,” the harness with its built-in tablet and shoulder speakers furthers Skeletronics’ goal to “support the evolution of humankind by launching a new era of technology that expands the range and function of our movements.” The futuristic contraption is juxtaposed with the model’s casual outfit of a branded red sweatshirt, a pair of shapeless acid-washed jeans, and black running trainers. 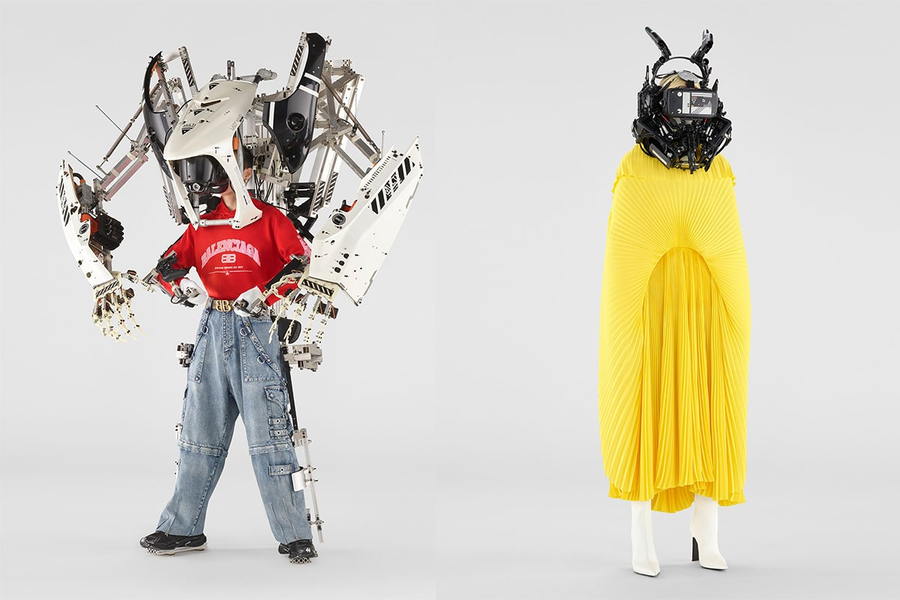 The robotic art elements of the Spring 22 collection will be available to view at each of the Balenciaga flagship stores in Japan, as well as the company’s Paris Montaigne shop. The exoskeleton will be displayed in the Tokyo Aoyama locale as a way to celebrate its reopening.

As one model struts through a door to the adjacent space, he or she morphs seamlessly into a new cyberpunk model, as does the scene outside the windows, flashing everything from shining urban skylines to serene beaches to deserts with sneaker sandstorms to lunar surface landscapes. The video ends with the phrase “HERE IS ANYWHERE,” reminding followers that the future is now, and the possibilities – including ones with cybernetic face coverings – are really what we make of them.