Dutch firm Maas Architecten has created an astounding country villa that combines functional architecture with cutting edge design. The house, named “Modern Countryside Villa,” bears a strong resemblance to a traditional thatched cottage with the exception of a glazed internal layer that appears to slide out from under its roof. The property is situated on the outskirts of Berlicum, a small town in North Brabant near the Belgian border. The house’s exterior is striking: two pavilions with deep-pitched roofs are connected by a glazed corridor at ground level, forming an “H-shaped” floor plan. The structures’ different aesthetics hint at their drastically different interiors. One wing contains storage, garage, and greenhouse space, while the other houses the villa’s main living, dining, sleeping, and office areas.

The master bedroom protrudes out of this wing and opens out onto a secluded terrace, situated near the center of the complex and protected from the wind on three sides. This terrace overlooks the house’s outdoor swimming pool and surrounding minimalist garden. From the house, the pool can be easily accessed via a concrete bridge that crosses a scenic reflecting pond. A small grove on the adjacent side street prevents passing cars from looking into the house and guarantees the homeowners a sense of privacy. 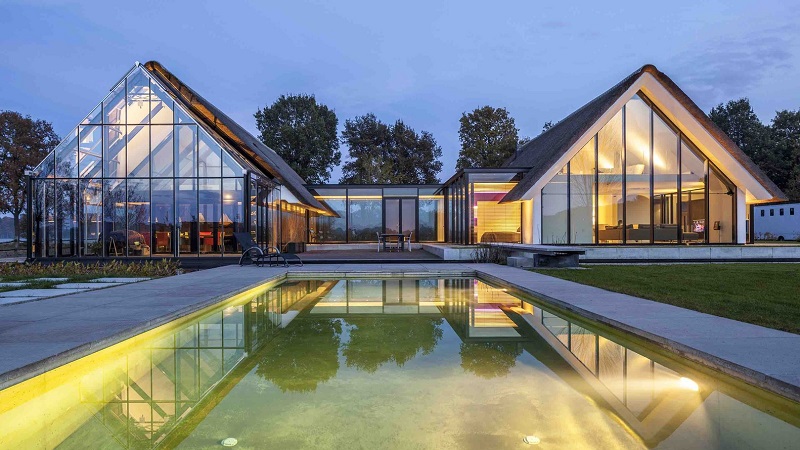 Material treatment and juxtaposition are perhaps the house’s two most innovative features. For instance, the villa’s facade consists of two materially-disparate gables on either side of the connecting corridor. The storage wing features an opaque front that has been clad in dark wood and set down a step from the living wing. In stark contrast, the living quarters are encompassed by a fully transparent exterior.

However, a hidden technical room has been cleverly positioned in front of the glass gable, preventing anyone from looking straight through to the back of the house. The home’s kitchen, bathroom, and pantry are all equipped with modern appliances and sleek, glazed furniture. For added privacy, the architects have placed these rooms inside of a large wooden “box” within the larger glass pavilion. 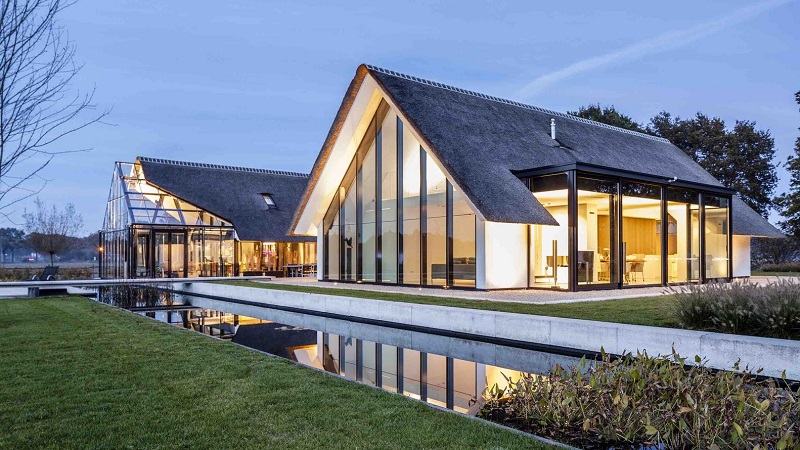 At the back of the house, the villa’s true character is revealed. The living wing looks much the same it does from the front: covered with floor-to-ceiling panes of glass, broken up only by cross beams and a heavy thatched roof. The storage pavilion, on the other hand, appears to have undergone a radical transformation.

Looking at it from the rear, this wing’s exterior is almost completely transparent and seems to edge out from underneath its own thatched roof. This surprising back room provides the house with a stunning focal point and can be used as a studio, atelier, or greenhouse.

By fusing the traditional look of thatched roofs with contemporary elements and transparent walls, Maas Architecten has created a modern marvel that refuses to sacrifice even a single, gorgeous view of the surrounding countryside. The name of the house itself is an overt nod to this architectural concept. The “Modern Countryside Villa” puts a modern spin on the comforts of country life.