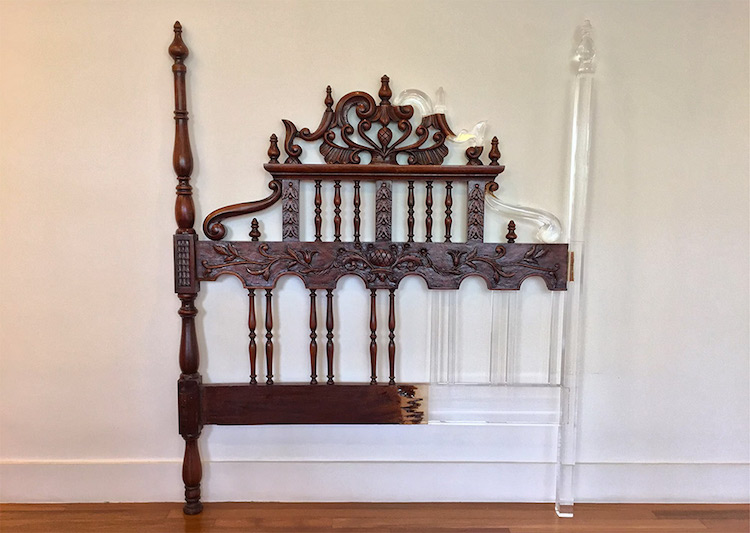 When an object breaks, your first instinct might be to throw it out rather than try to repair it. Even if you do put the time and energy into its restoration, your goal would likely be to make it look like new again, as if the damage and subsequent change had never occurred. But a Japanese tradition called kintsugi considers brokenness part of an object’s history, and something to be acknowledged rather than covered up.

Kintsugi is the art of repairing broken pottery with gold, silver or platinum lacquer to make the cracks stand out rather than diminishing their appearance. The use of such precious metals contrasting the ceramic is meant to convey a sense of pride in the fact that an object has met a challenge and overcome it, reflecting a Japanese philosophy encouraging acceptance of change. In our modern world of disposability, we could definitely stand to integrate these ideas into our cycle of consumption. 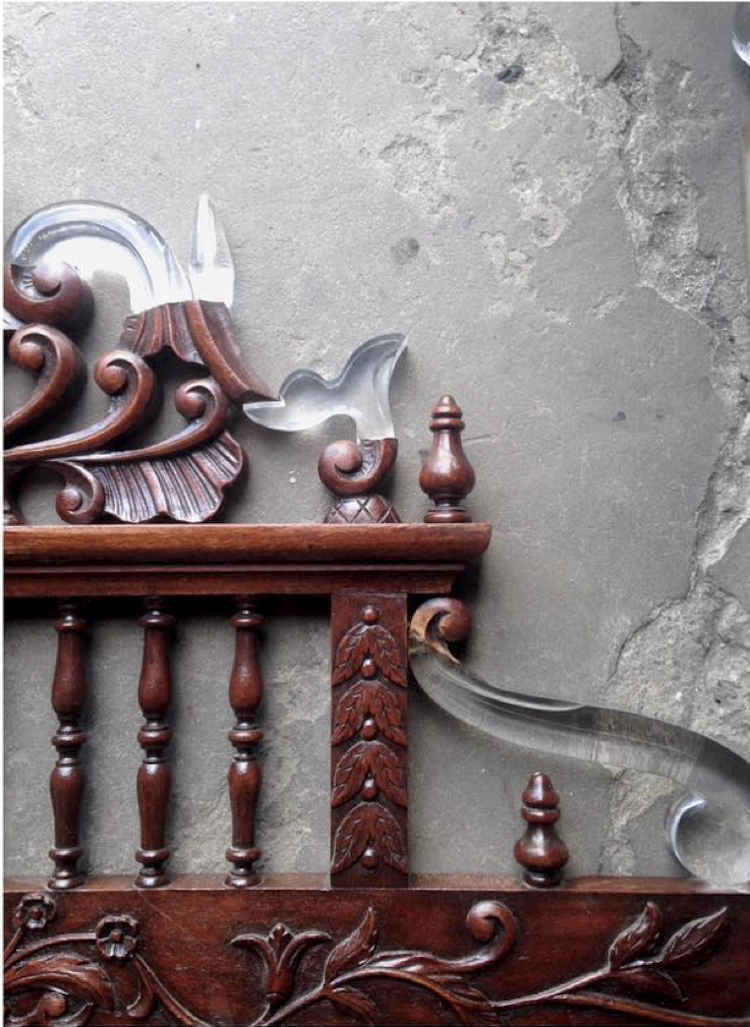 ‘My New Old Chair,’ a series of functional art objects by Tatiane Freitas, represents one way to do just that. The Brazilian artist saves traditional wooden chairs and an ornate carved headboard that might otherwise be deemed ‘broken beyond repair’ by re-creating their lost parts with clear acrylic. Not even the loss of a chair’s seat, the most important part, renders it irreparable.

The result not only highlights the areas of the furniture that no longer exist in their original form, but re-creates them in more contemporary shapes, creating a stark contrast of old and new, past and present, history and current reality. It’s almost as if you’ve caught each piece transforming itself into a new form of its own accord. 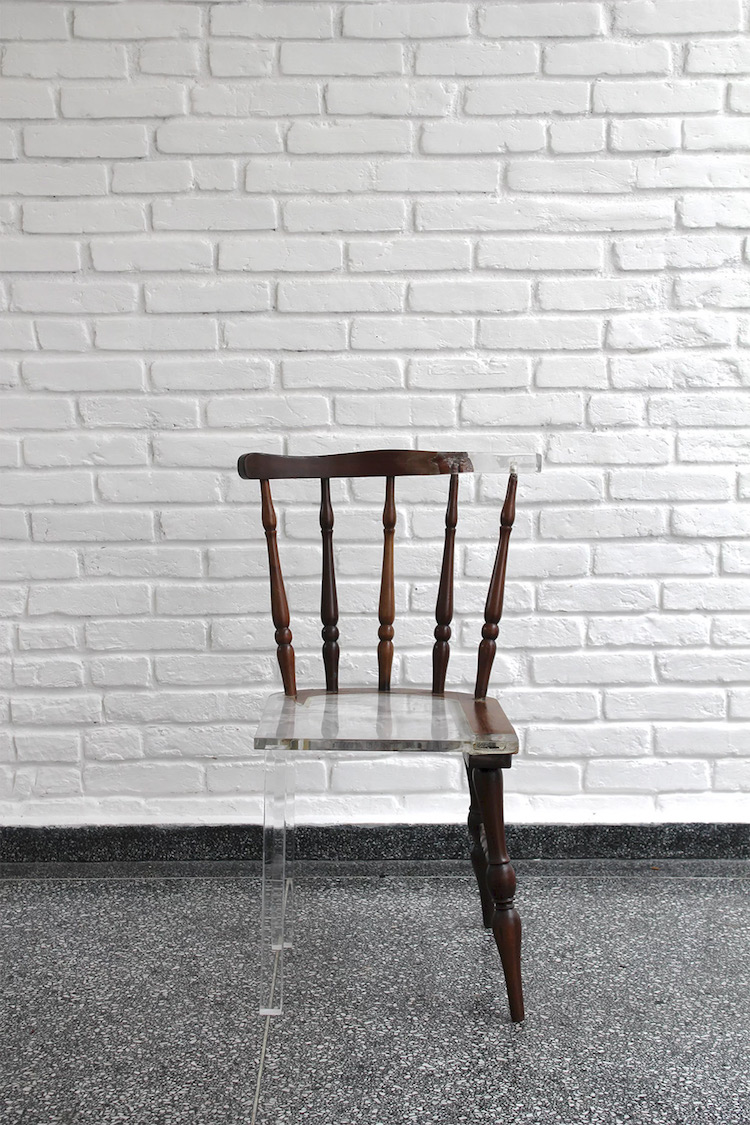 The original wooden elements stand out in their solidity and opacity, while the new parts are almost like ghosts of the pieces that have been lost to time and wear. We’re left thinking about what being broken actually means, pondering it as a temporary state offering an opportunity for transformation, growth and progress rather than a condemnation to the burn pile or the dump. 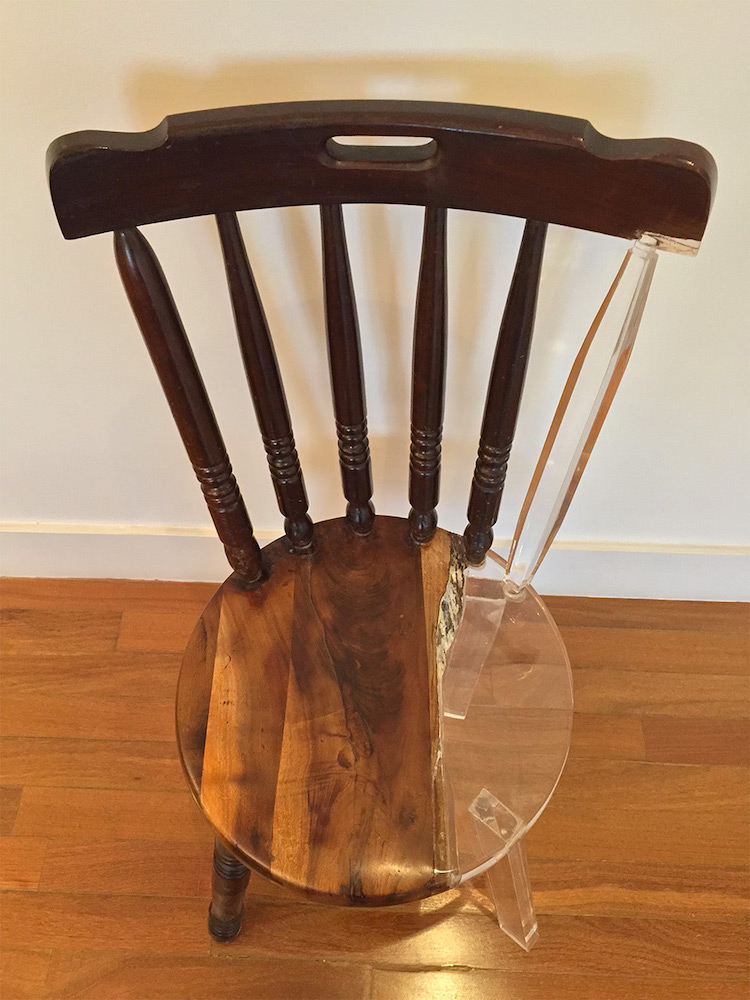 It’s a pretty profound message to be sent through the unassuming medium of a piece of furniture. If this can be true for pottery and chairs, what else can it apply to? How would you adapt this message to create less waste in your own life, and find value in imperfections of all kinds? It’s easy to see how a shift in thinking around the disposability of objects could extend to topics like aging in our own bodies, as well.

For Freitas, the choice of mixing wood and acrylic “demonstrates her clear wish to create pieces which will endure the harshness of time, and therefore bring to their new owners the memories evoked in her, many lost in history,” as she explains in her artist statement. “A recurring creative subject, which permeates most of her work, is transforming common objects with a balance between the eternal struggle which we all live, the concept of ‘past x present,’ ‘old x young.’ The memory they bring does not remain trapped in the past, but also adjourns with the contemporary days.”