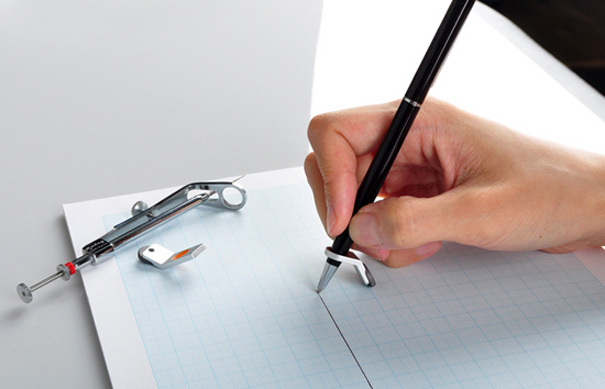 If you have ever drafted by hand for work or pleasure, you know that straight lines are hard to sketch or trace by pen or pencil without something as your guide – and laying down the ruler, triangle or square each time takes, well, time. What if you could just snap something onto your drawing tool instead?

But this concept goes beyond simple enabling linear effects – from drafting to simply underlining more neatly in books – it is envisioned by product designer Giha Woo as a way to measure while you draw as well, and display the results in realtime on a digital readout.

These days there may not seem much need since computers can draft for you, but any creative person knows there is something about putting pen to paper (or stylus to pad, at the very least) that gives you a more visceral connection to your creation.

“As everyone is well aware of the definition of a circle, it is a group of points located at an equidistance from one point. However, the definition of an ellipse is a bit more geometrically complex. An ellipse is a curve on a plane surrounding two focal points such that a straight line drawn from one of the focal points to any point on the curve and then back to the other focal point has the same length for every point on the curve.”

“I discovered the rules through the aforementioned definition and found out a method for drawing an ellipse. And I designed a tool that can be used to create ellipses more easily and freely.”