Designed for a multigenerational family on Quadra Island in British Columbia, Canada, this wild “Mountain House” reimagines what residential architecture can look like even on the most challenging and terror-inducing building sites. Instead of one big building, the residence is divided into modular sections arranged both horizontally and vertically to perch on the rock and gaze out in every possible direction. The home is designed around existing trees on the site and features a cantilevered glass-bottom swimming pool. 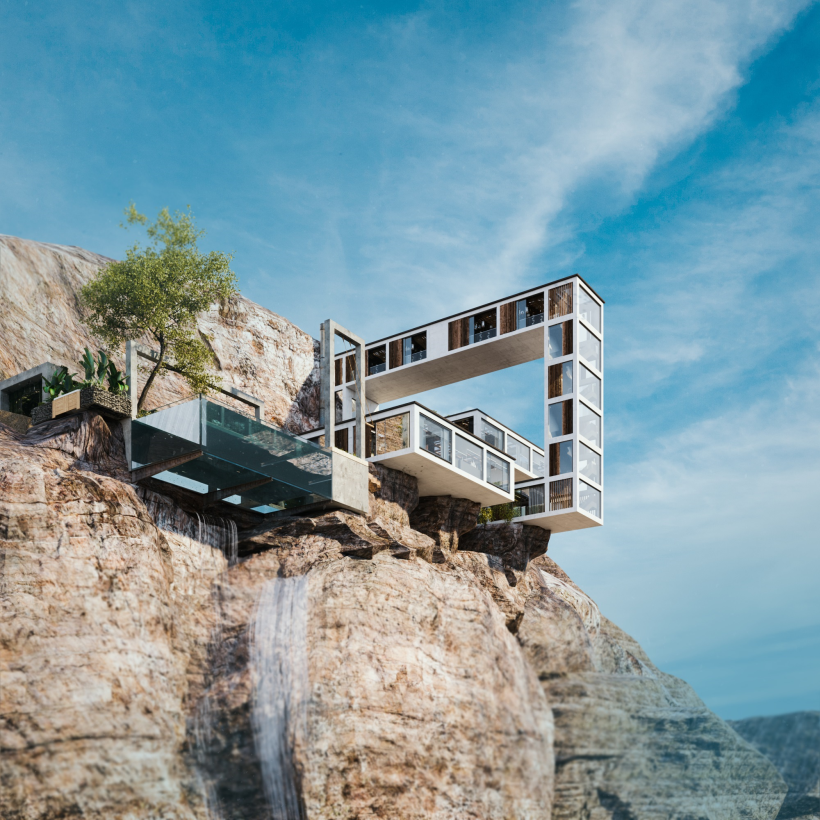 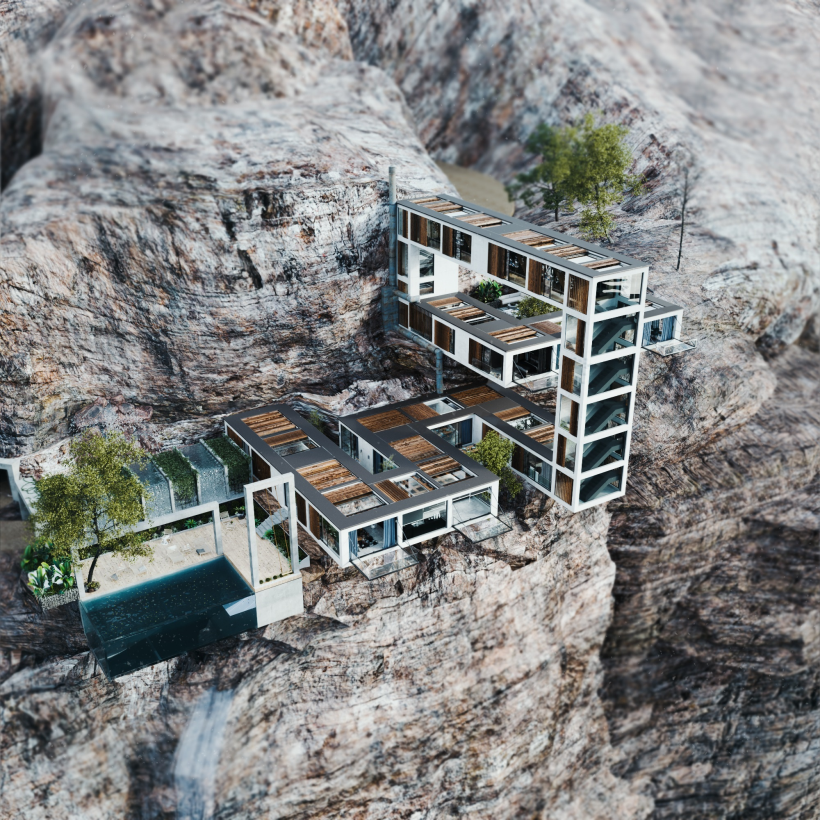 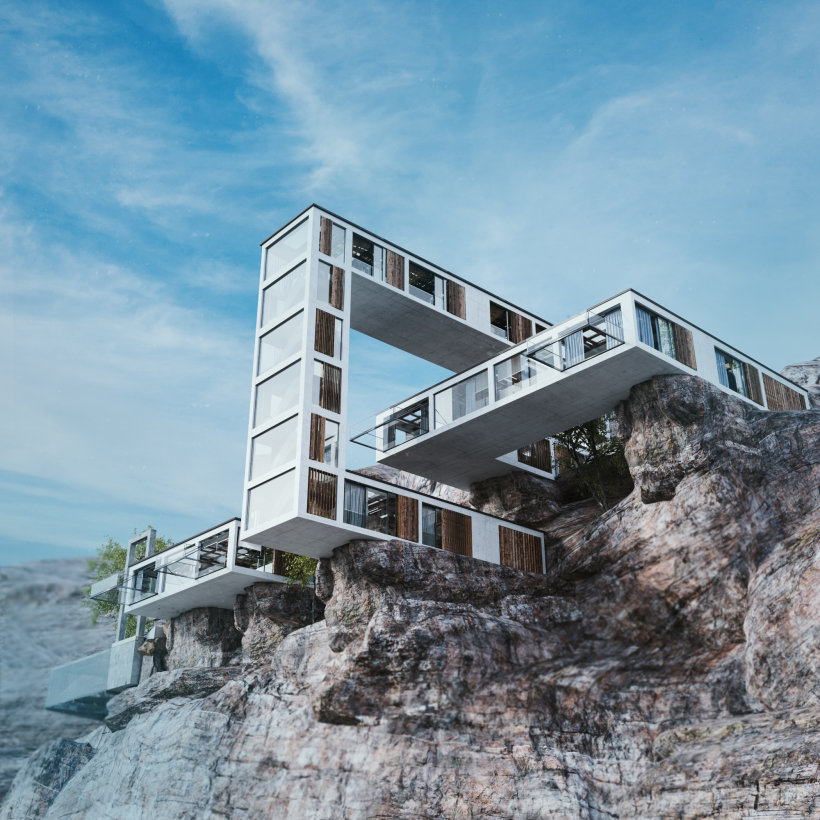 One level of the home is for a young family, one is for their parents, and another offers a recreational sports space and gym for the residents and their guests. The third volume rises above the others, jutting out vertically over the cliffside so that one tower-like section feels like it’s hovering in the air. A continuous stairway can also be glimpsed through the windows, making it sort of like an observation tower. Both the son’s house and the parents’ house have their own private backyards tucked somewhat safely against the cliff, and a shaded corridor offers access to the swimming pool from the son’s house.

One of the coolest aspects of this design is its wooden rooftop shades, which can be either closed or opened to let sunlight flood inside (a nice treat in this rainy part of the world). The glass walls facing the water unfold into balconies reminiscent of vertigo-inducing skyscraper platforms like the Skydeck at Chicago’s Willis Tower, the swimming pool features an infinity edge, and if you look closely, you’ll see what looks like the world’s most dangerous swing at the edge of the outdoor terrace. In other words, this residence is for daredevils only, and anyone who’s clumsy or afraid of heights need not apply. 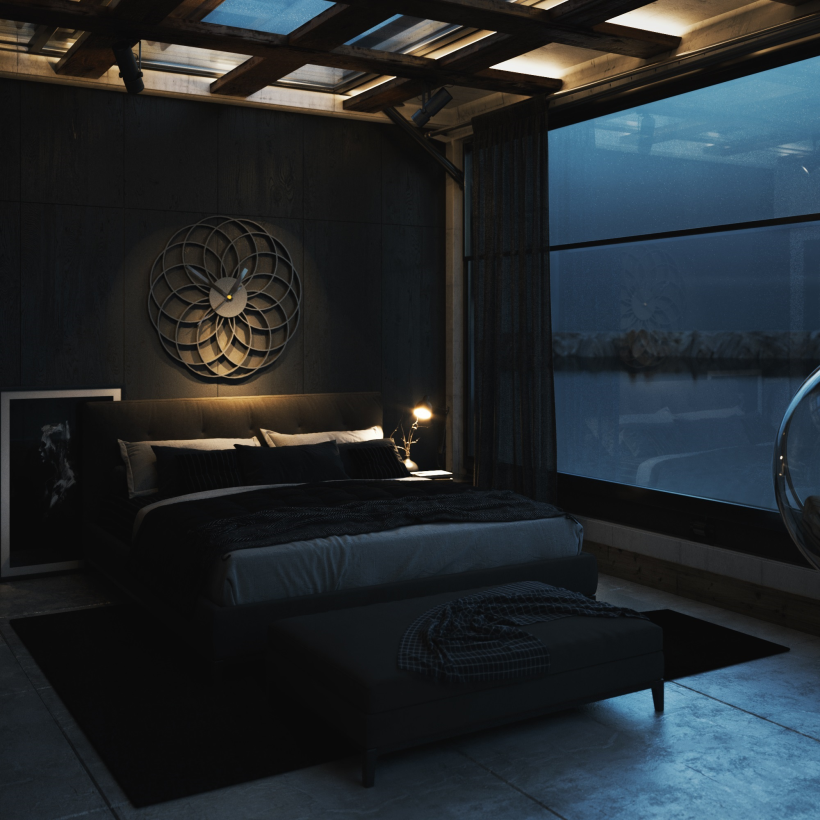 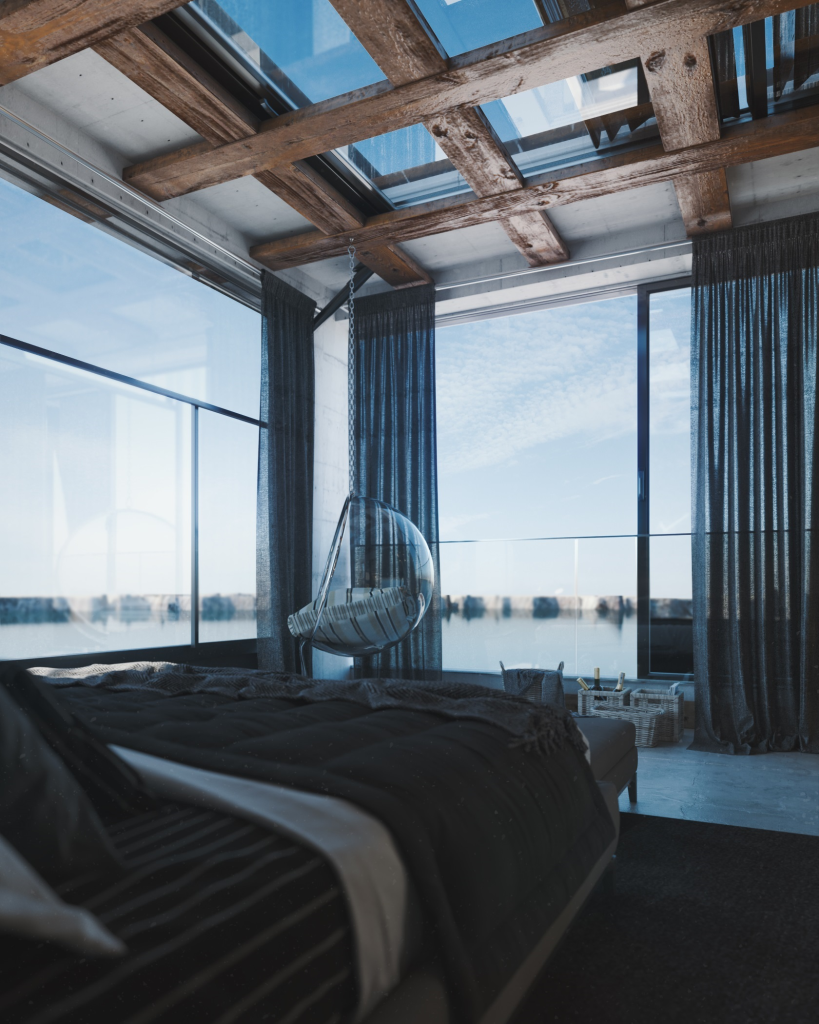 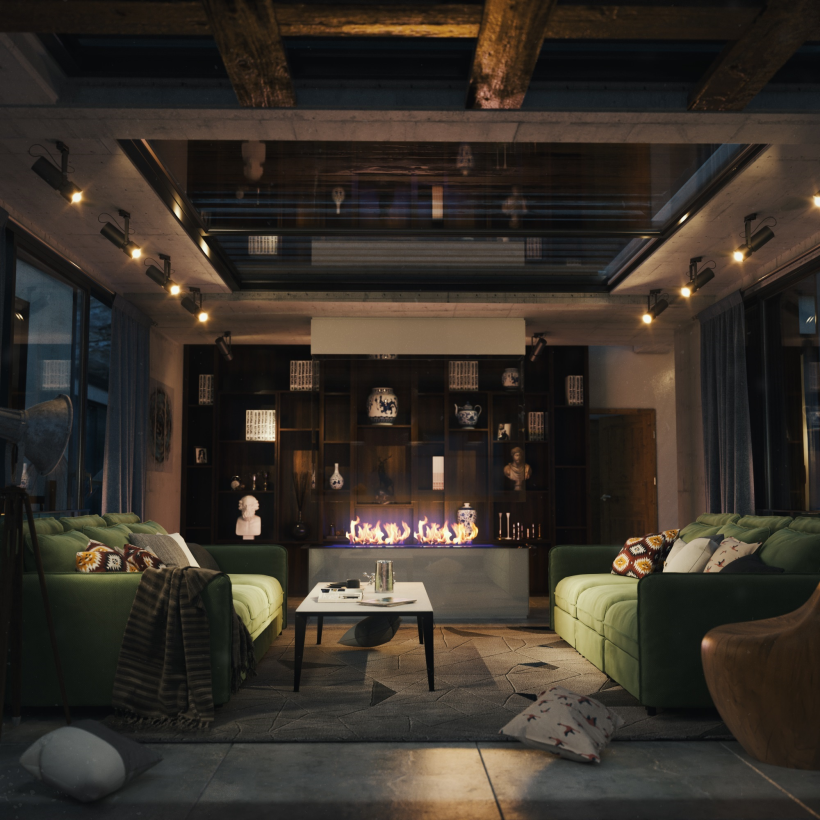 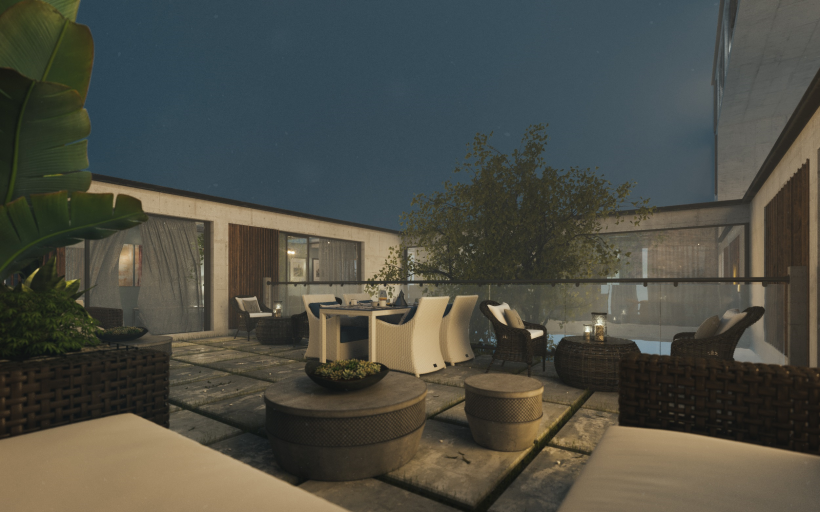 If you think this concept looks unlikely to ever actually become a reality, you may be right, though Iranian architect and interior designer Milad Eshtiyaghi says construction plans are underway and set to begin later this year. It’s a daring project, but not impossible, and it wouldn’t be wildly out of place among the more luxurious homes in British Columbia. You can see short animations of the home’s interiors and various angles of the exterior, including the approach from the top of the cliff, at Eshtiyaghi’s website. 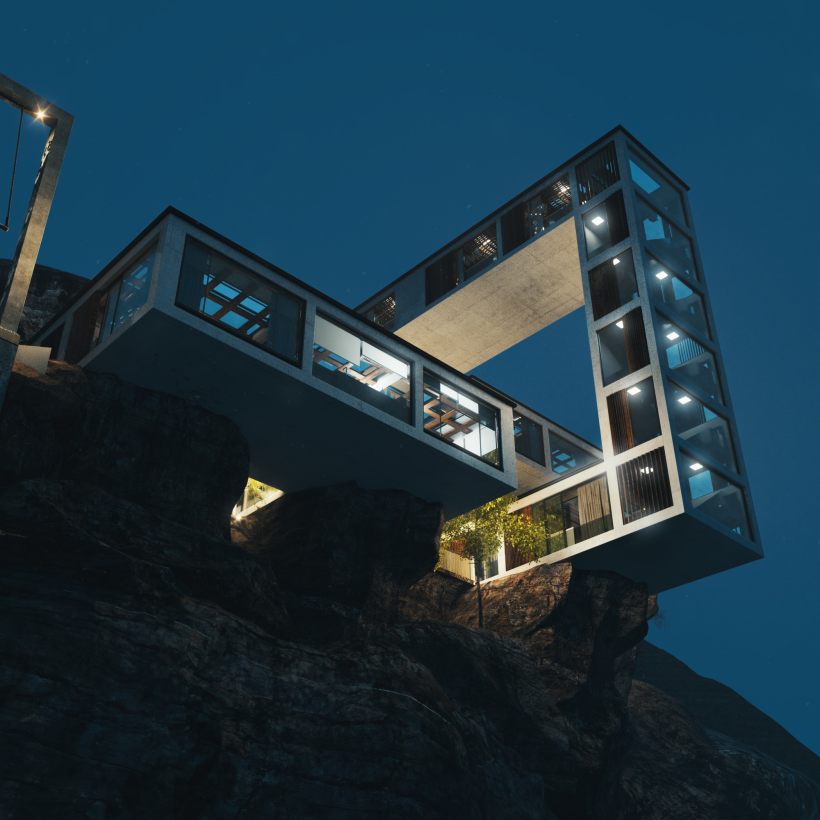 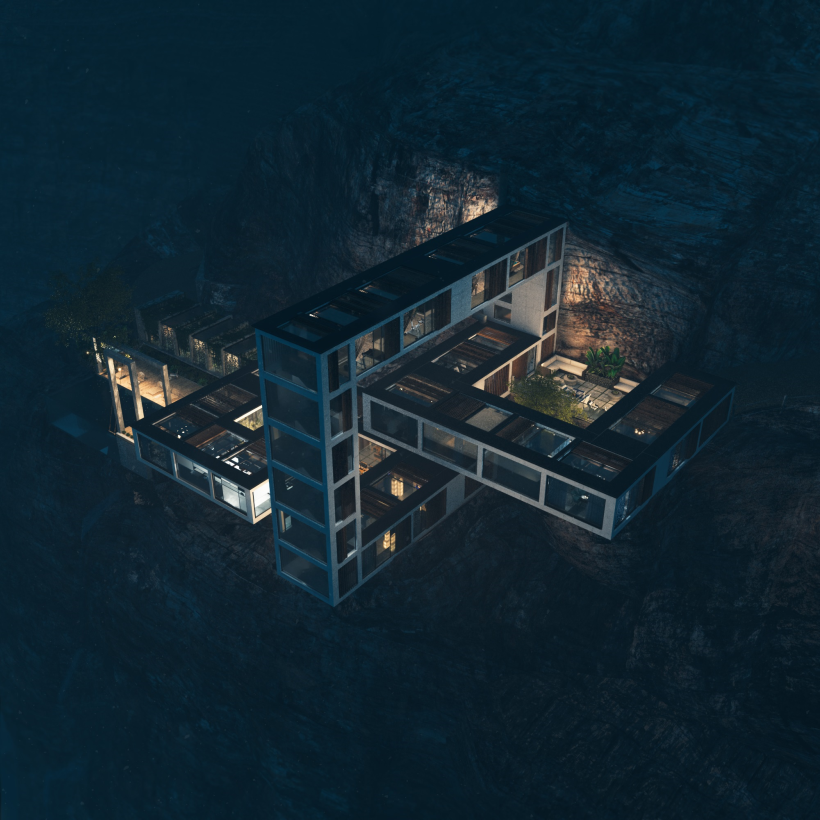 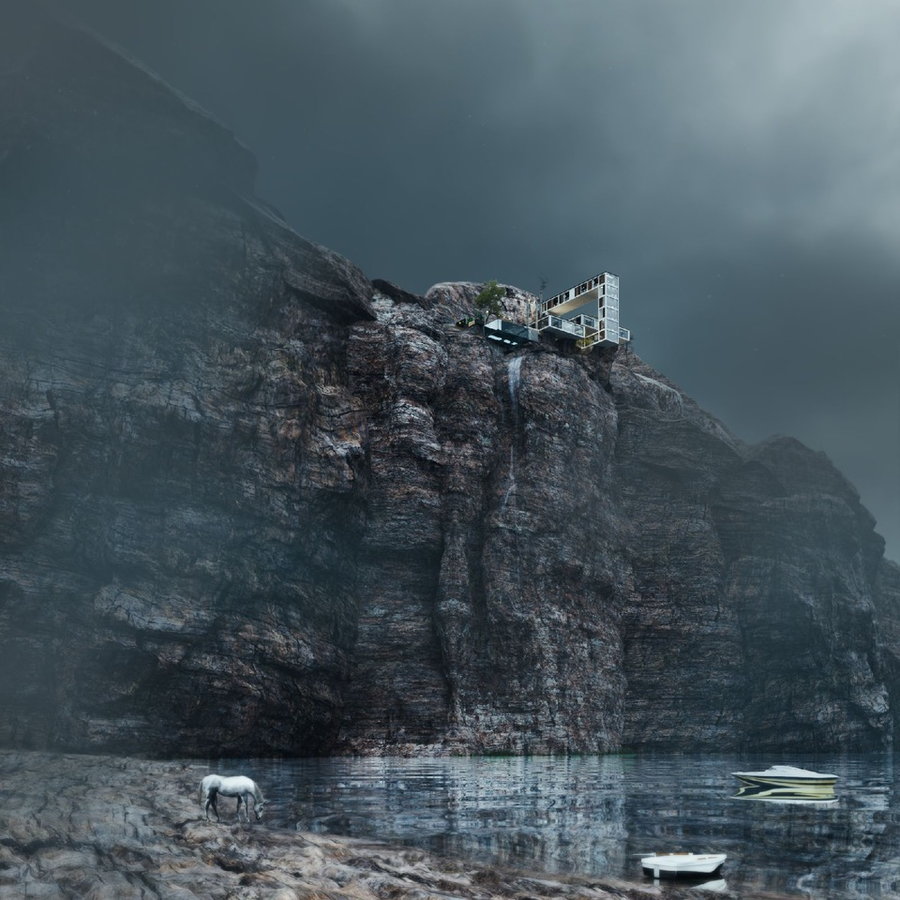 Eshtiyaghi is known for dreaming up incredible architectural concepts that veer into futuristic and fantastical characteristics without losing the sense that they could be real. Anything but ordinary, these projects often reconceptualize what homes and apartment buildings or condos can look like. For instance, the Villa Residential Complex, envisioned for the north of Iran, consists of a bunch of stacked triangles in various sizes ranging from singles to duplexes and triplexes facing both the southern forest and the northern sea. 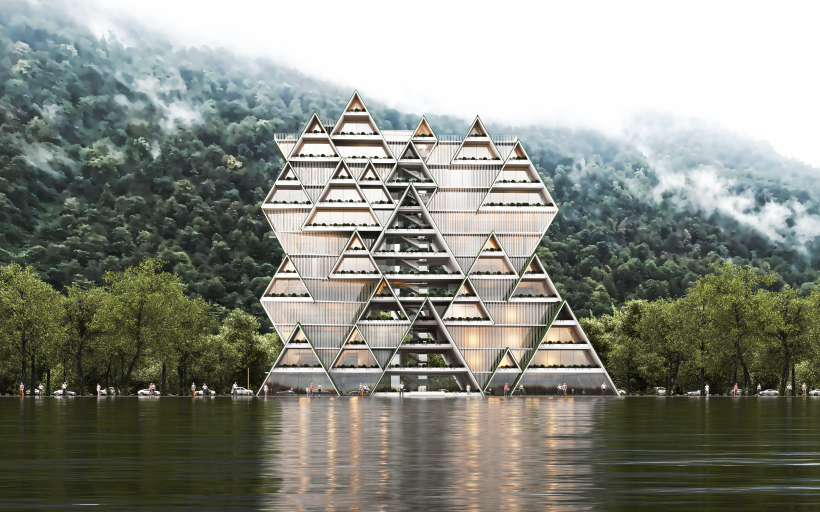 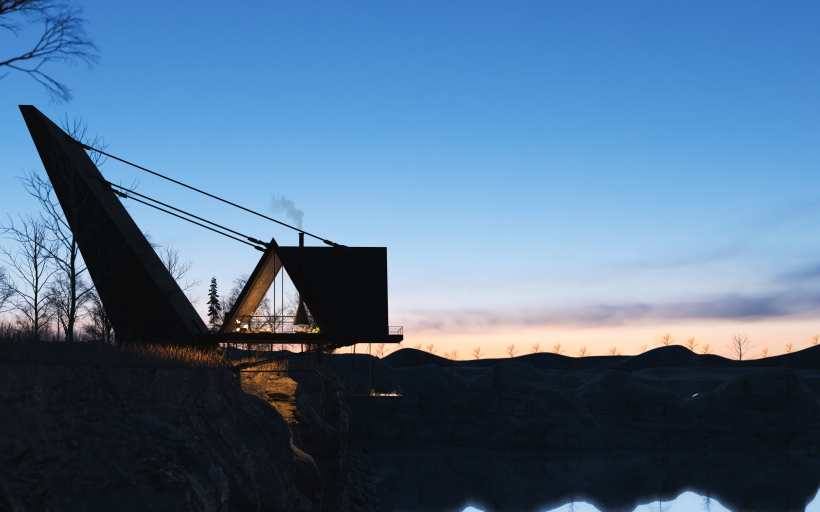 Another dramatic cantilevered project, Suspended House, takes an ultramodern silhouette in black and dangles over half of it over the edge of a cliff. Cables attach the home to a huge steel mast that bears the weight of gravity while withstanding lateral and upward wind forces. “We designed the mast of the project as someone who has been bended by opposition and is pulling a rope,” says the designer.