The Peacock chair is a design icon, but most people associate it with 1970s bohemian style instead of its true origins. Filipino-American designer Cheyenne Concepcion hopes to change that. She learned about the chair’s history in the Philippines while performing research on the architecture of the 1915 Panama Pacific International exposition in San Francisco, and now she’s sharing that heritage with the world, alongside her own elevated and modernized interpretation. 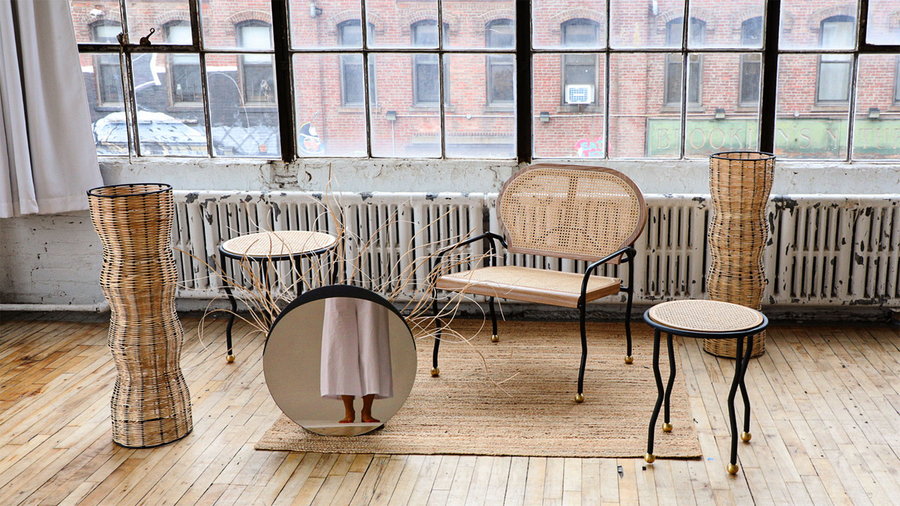 “This is one of the most famous chairs in the world, and it’s so disconnected from its original heritage,” Concepcion told Curbed. She learned that it originated at the Bilibid Prison in Manila in the early 1900s, where it was made by incarcerated people. “I literally just stopped in my tracks. This was such a strong cultural symbol. How could I not know about its history?” 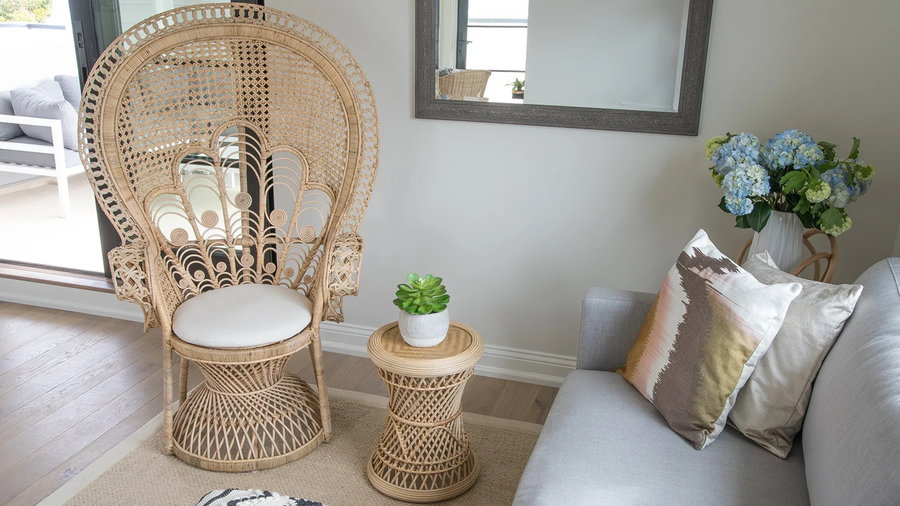 A graduate landscape architecture student at the time, Concepcion was seeking historical references from her own culture that she could incorporate into her designs. She found herself magnetically drawn to the classic woven rattan Peacock chair (seen here in a version by Kouboo) with its high, round back. Featured on dozens of album covers by artists like Al Green, James Brown, and Drake, the chair also famously appeared in a portrait of Black Panther Party co-founder Huey Newton.

“To me, it’s about more than designing a collection; I’m inventing a style,” Concepcion says. “Within Asian culture, there is a hierarchy of whose history gets recognized, who gets to have cultural heritage, and who gets to sponsor diplomatic engagement because of their cultural heritage. The Philippines has been left out of that. Because of colonization and assimilation, there has been a loss of direct connection between our Indigenous past and where we are today. My dream is to bring visibility to our story.”

The tale of exactly how the chair came to be designed and manufactured in a Philippine prison is a fascinating one. The country was already known for its long tradition of basketry made of rattan and bamboo, but the popularity of rattan furniture that first exploded in the early 20th century is a product of American colonialism. Furniture — particularly chairs — was not common in the Philippines, where floor-sitting was the norm. 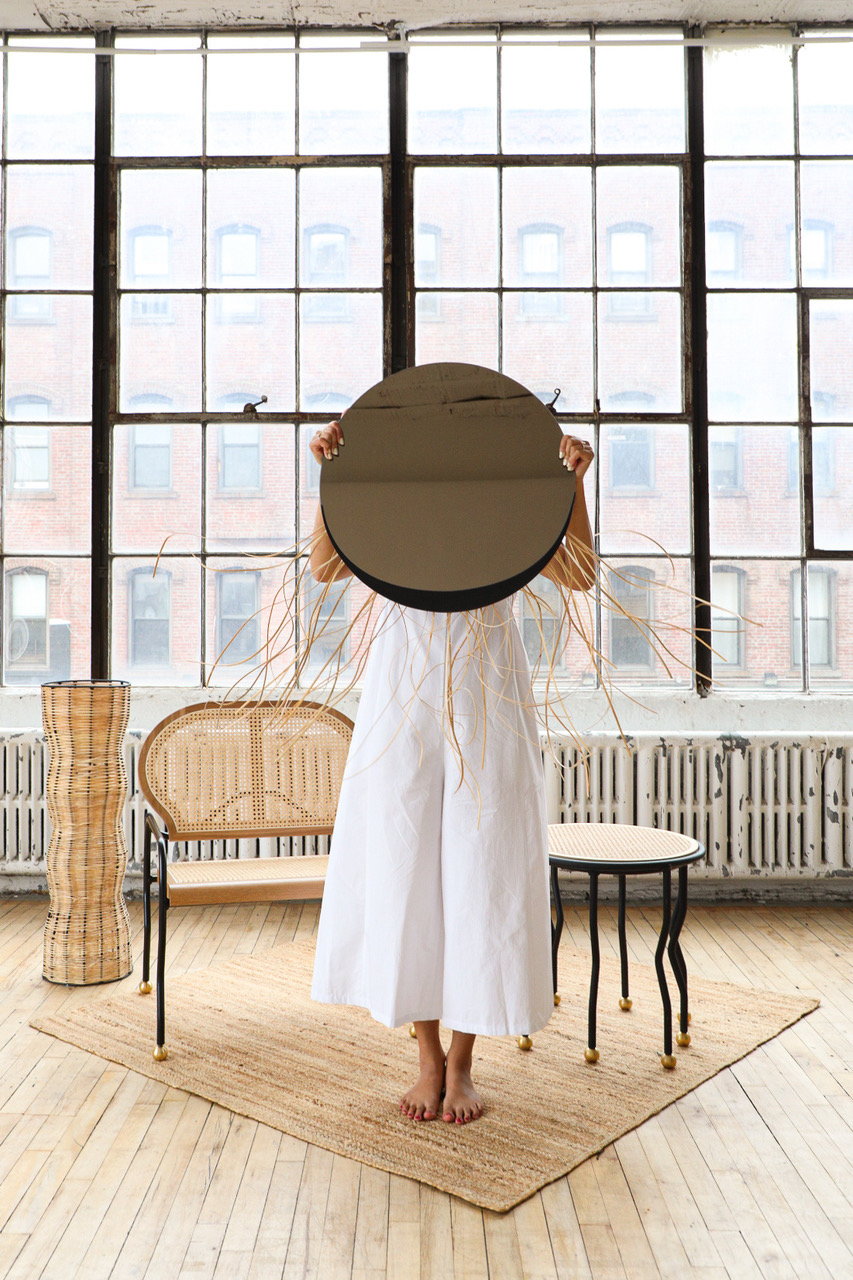 Chinese and European colonists occupying the country at the time wanted chairs, and actually believed that getting prisoners to make them would help “civilize” them. The throne-like Peacock chair made its design debut at the 1915 Panama-Pacific International Exposition and quickly captured the public imagination. In the United States, people saw it as a symbol of exotic foreign royalty. It has remained a part of the cultural consciousness ever since, and helped drive a renewed interest in woven cane design in recent years.

With her RECLAIM collection, Cheyenne Concepcion pays tribute to the Peacock chair’s cultural history as well as the broader traditions of Philippine weaving. The beautiful four-piece collection includes the Doña Lounge Chair, the Coco nesting table set, the Lolo mirror, and the Anak Totem sculptures. 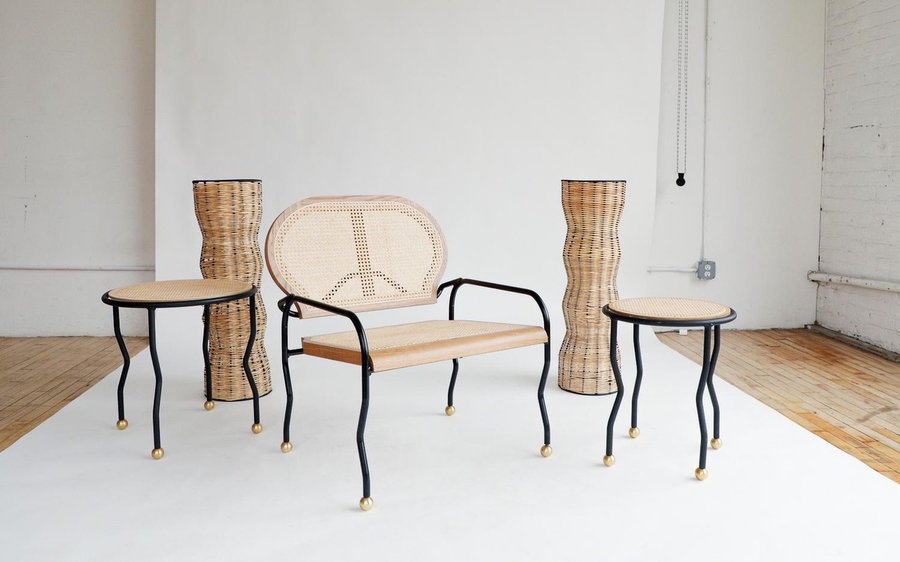 For the Doña, Concepcion lowered the height of the Peacock chair, gave it a more relaxed posture and brought in accents of wood, brass, and steel. The bronze-tinted smoked mirror has a tropical vibe with its loose strands of cane streaming out like fringe. The collection truly feels like a new paradigm for tropical Asian-Pacific design, and a lovely nod to the feminine art of weaving.