A husband-and-wife architect team has come up with a treehouse that can grow along with the surrounding forest, according to the occupants’ needs. 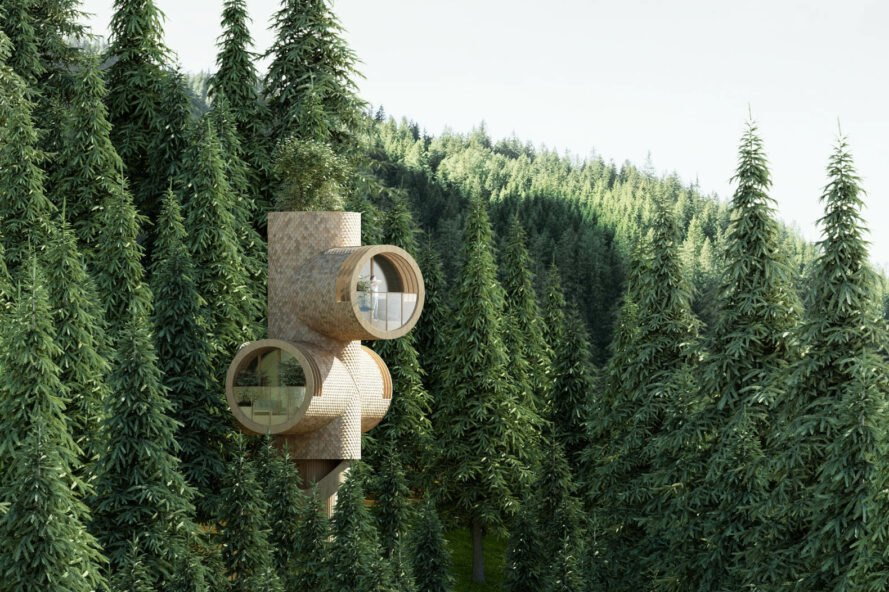 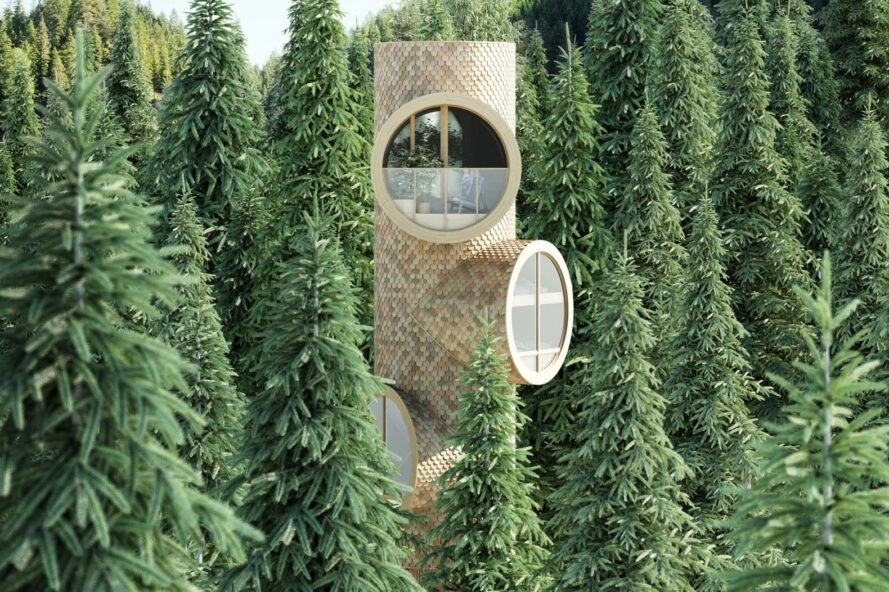 Commissioned by the tiny home startup Bambau and designed by architecture studio Precht, “Bert” is an imaginative modular home that can sprout up vertically as well as horizontally in the form of additional prefabricated rooms and stairwells. The layout of the home mimics that of a tree, with its upward movement and ability to branch out. 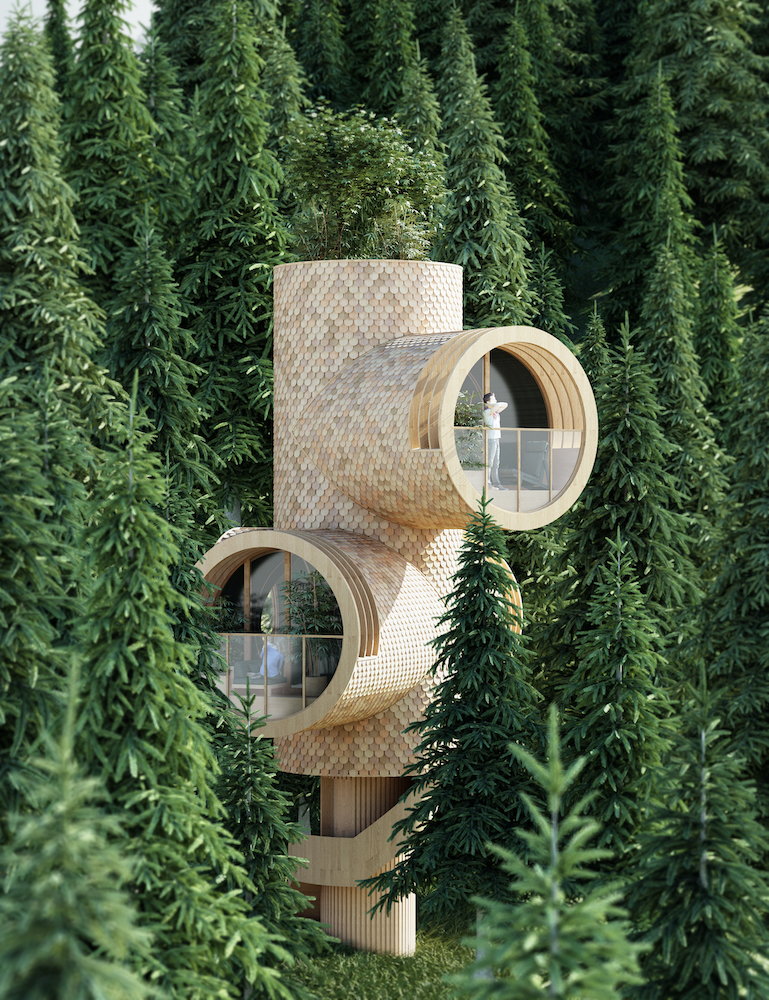 For inspiration for their build, studio co-founders Chris and Fei Tang Precht tried to get inside the mind of a child. “As architects, no matter if young or old, we have an inner child that looks at the world with playfulness and curiosity,” says co-founder Fei Tang Precht, adding that “that curiosity makes us want to explore, experiment, and create. That same curiosity gave birth to Bert.”

They even used elements from children’s entertainment within their creation. “We are fully aware that architecture is this serious and profound craft with a long culture and tradition. You see that when we architects find reference for our projects in art, philosophy, literature, or nature,” says Chris Precht. “For this project, we also looked at art to find reference. But not at Michelangelo or Dali. Rather we looked at cartoon characters of Sesame Street or Minions.” 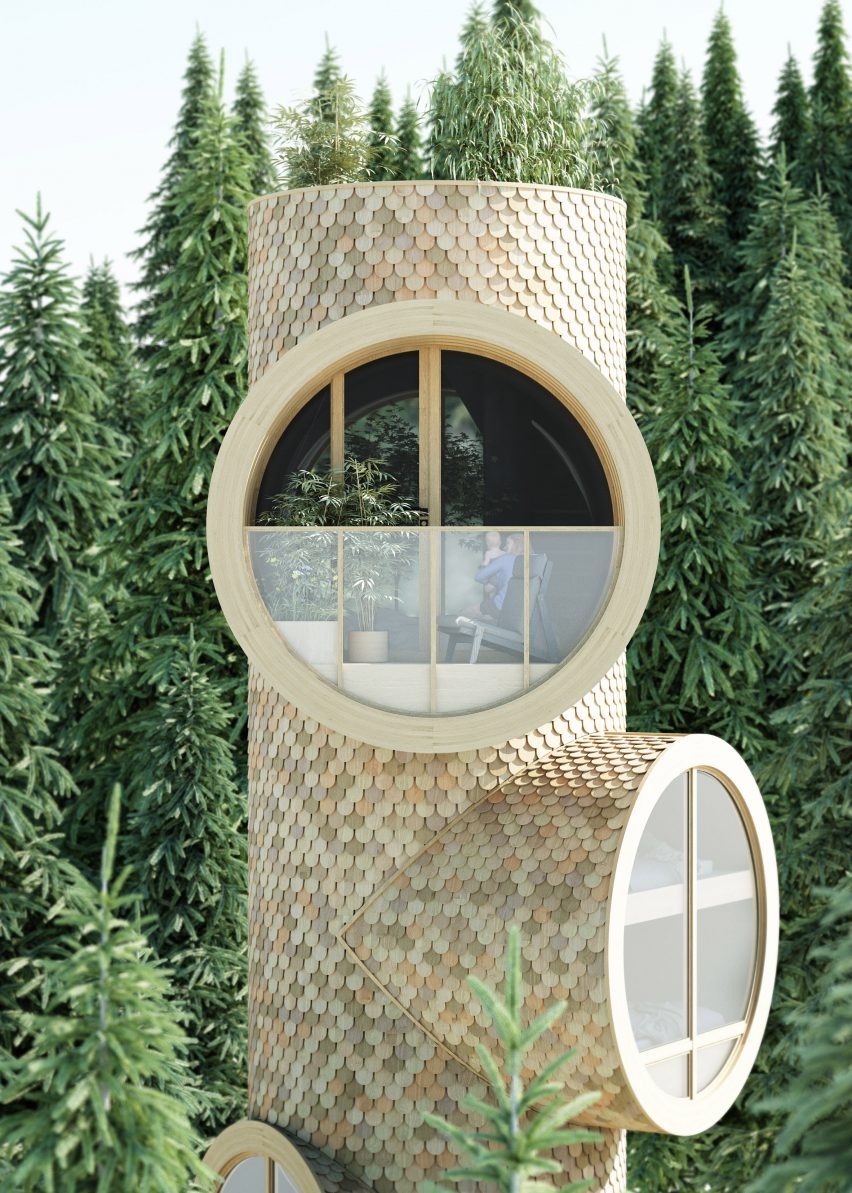 The name even came from the Sesame Street character Bert, beloved for his long, cylindrical head, while the structure’s round, oversized windows were intended to look a bit like the one-eyed minions from the Despicable Me film series.

“We took a playful look at this project and wanted to create a rather unique character than a conventional building,” adds Chris, “a quirky looking character that becomes part of the wildlife of a forest. I think this quirkiness can create feelings and emotions. And maybe these are attributes in architecture that are missing these days.” 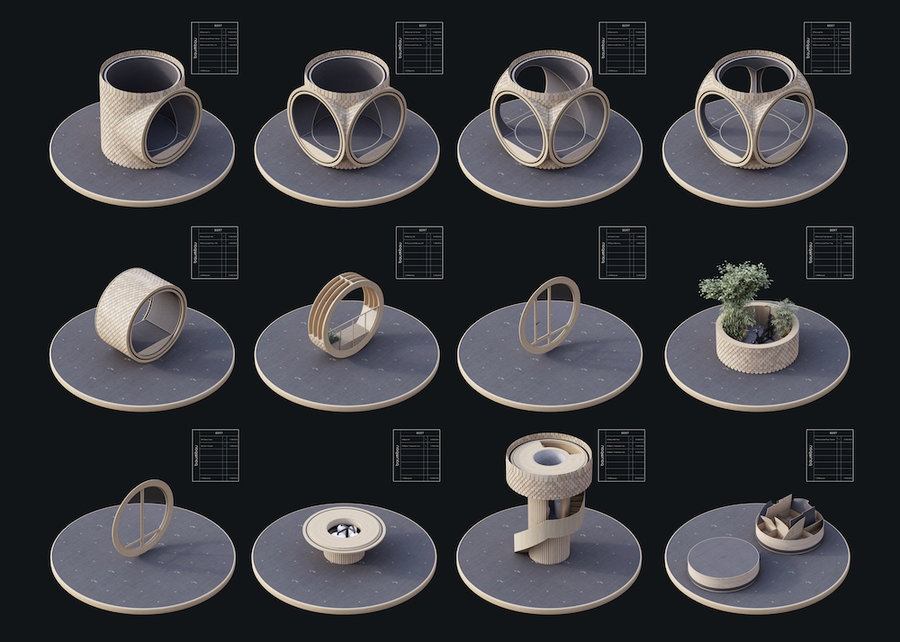 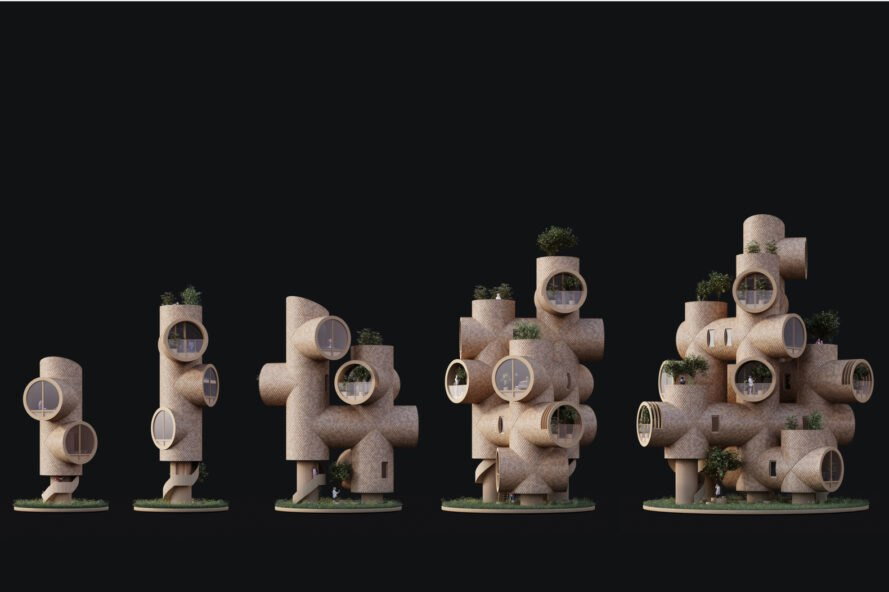 The treehouse begins like any sturdy sapling, building its foundation into the ground with a circular base. Then “the trunk” of the edifice begins to grow, with tube-shaped units like kitchens, living rooms, and bathrooms being stacked on top of each other or creating new horizontal limbs. 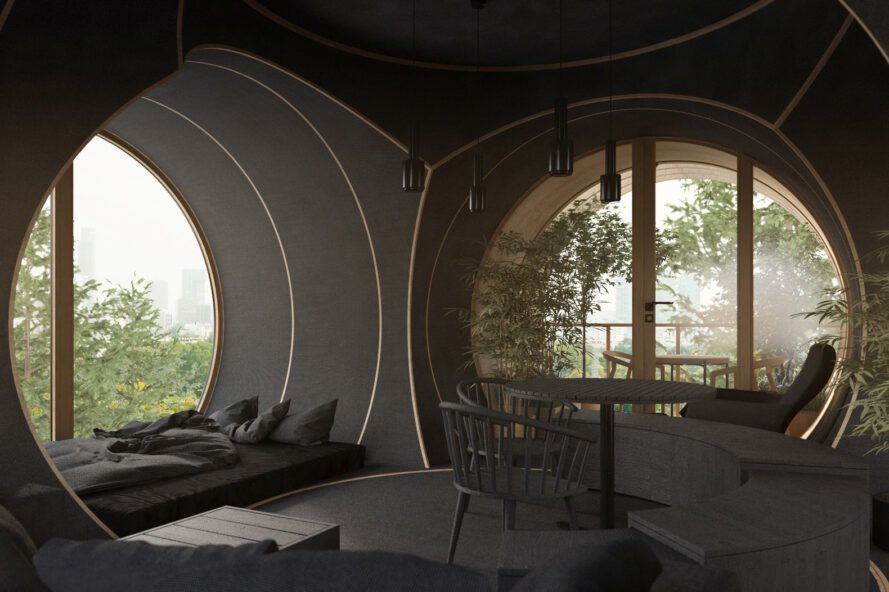 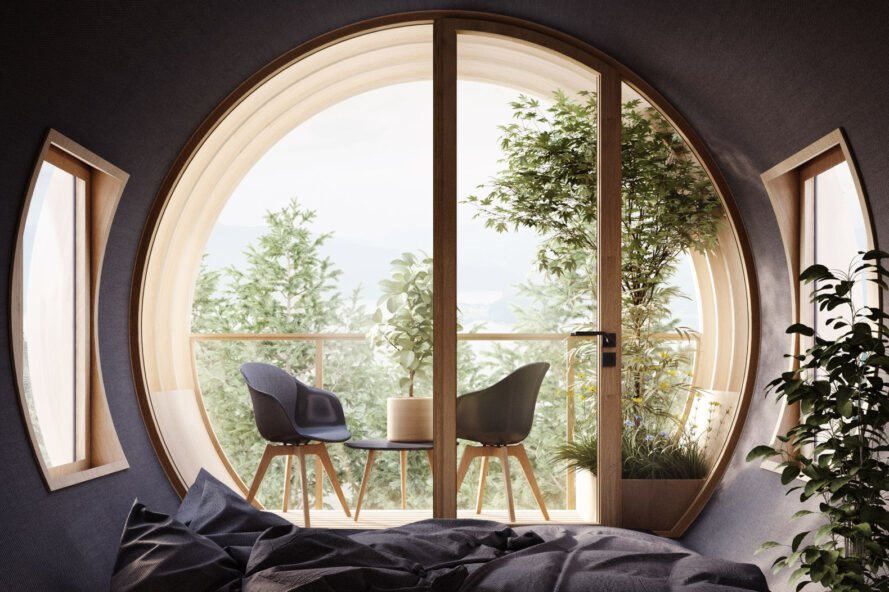 Constructed from wood, the exterior is covered in leaf-shaped shingles to give the treehouse an element of camouflage in the forest. Inside, dark fabrics keep the home cozy and hold in the heat. If an off-grid system is required or desired, Bert can be fitted with solar panels on the roof and a composting toilet and water treatment facility can be built into the ground floor. Alternate plans are available for Bert in less forested regions, too, as it can be fabricated from steel instead of wood.

Studio Precht, based out of mountains of Austria, continually tries to build distinctive, climate appropriate, and culturally defining structures. They disdain the “International Style” of buildings made of concrete and steel that are essentially “a copy of a copy of a copy” and make cities look indistinguishable from each other. 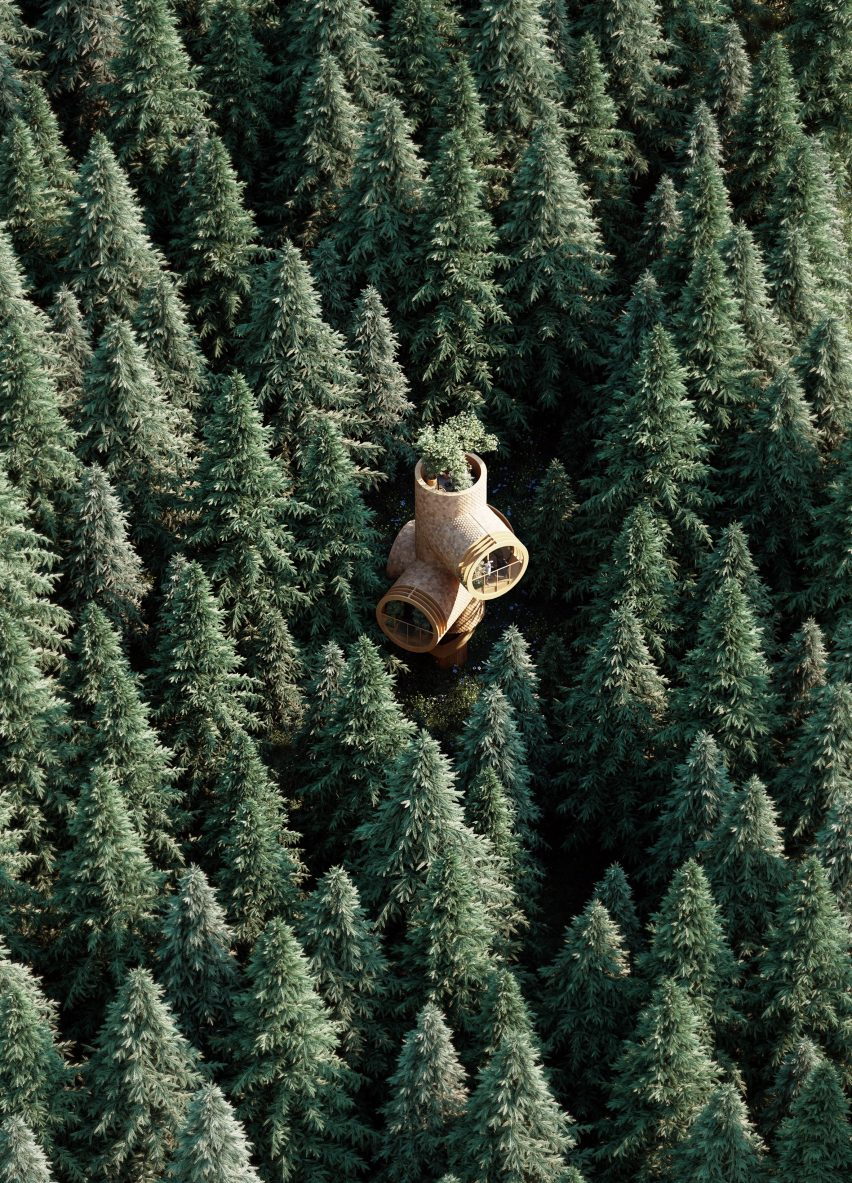 Chris and Fei “know that buildings like Bert are not the path forward on a big scale, but [we] think as an industry, we need to dare more, try more, and experiment more towards a more diverse future of our cities.”