Providing a reality check for all of our “idealized domestic environments found on digital platforms,” artist Rex Southwick has painted an ongoing series of images depicting the grittiness that goes into creating the picture-perfect homes we idolize. 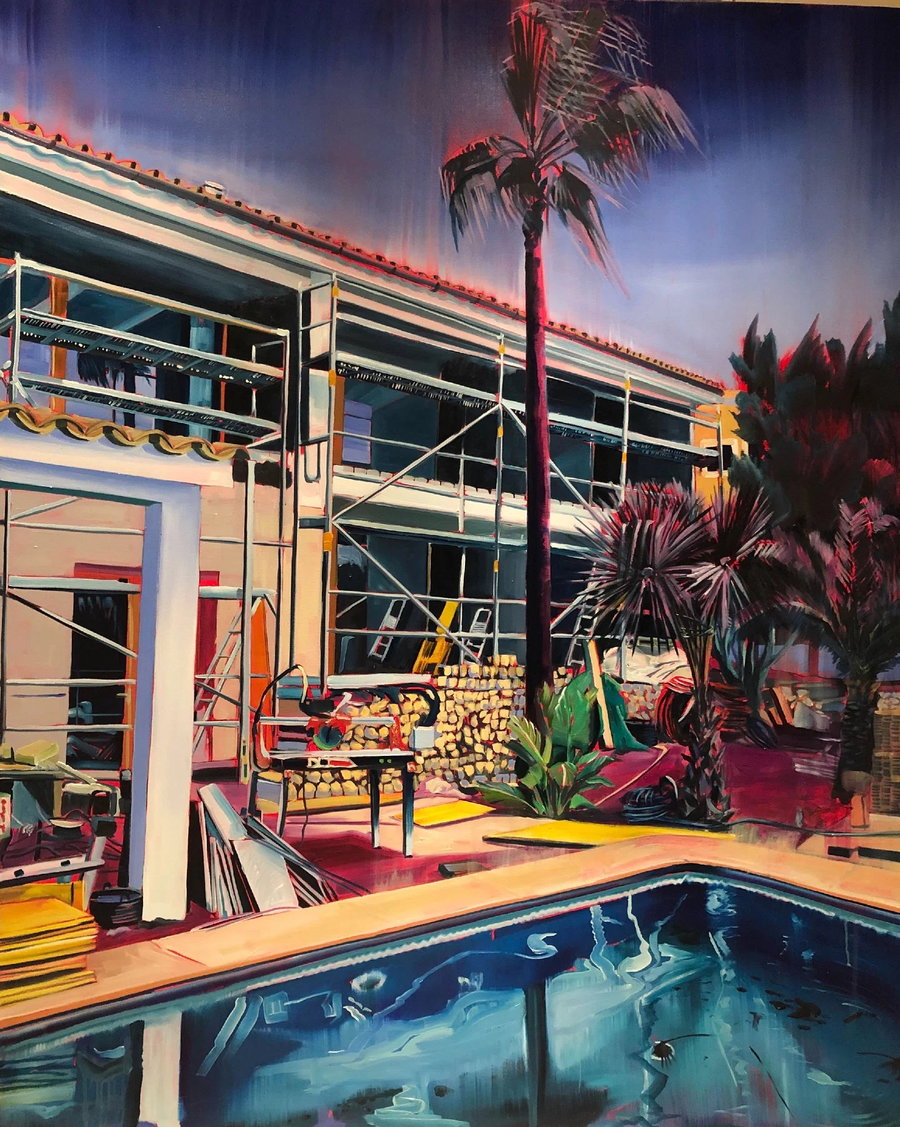 With ultra-saturated oil on canvas paintings, Southwick shows laborers installing pool tiles, lifting non-native plants into gardens, and climbing ladders on second-story ledges among other scenes that emphasize the messy reality behind luxury houses. As he says on his website, the paintings invite viewers to see these fantasy homes “at an incomplete and less imposing state.” 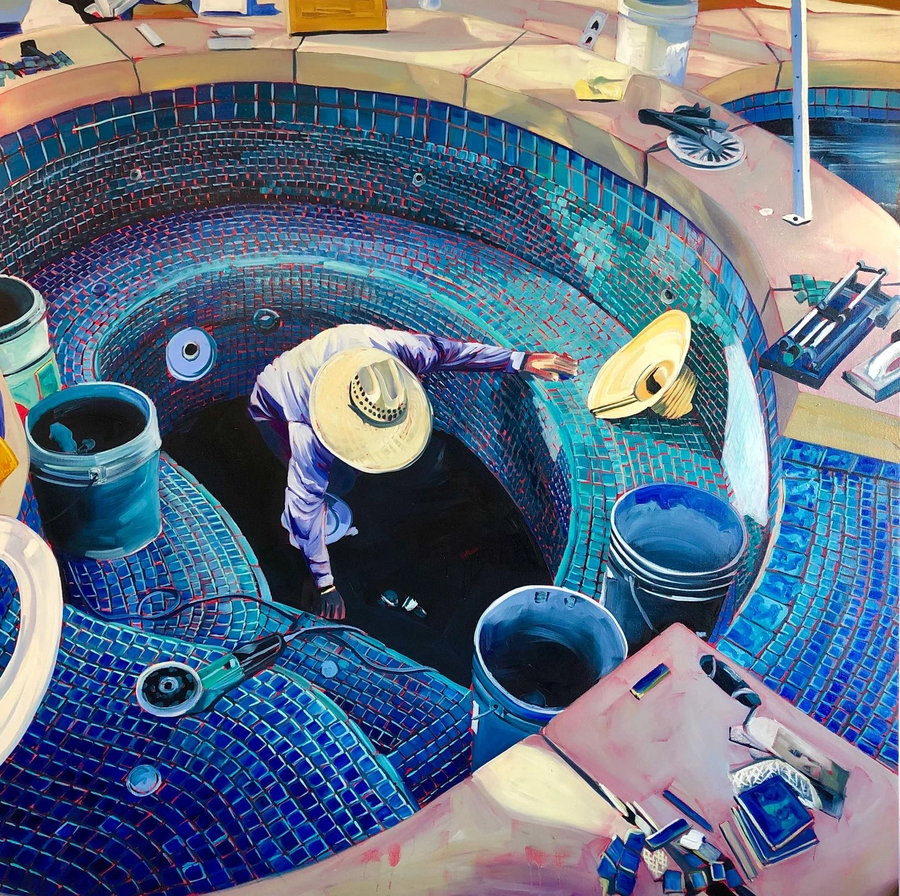 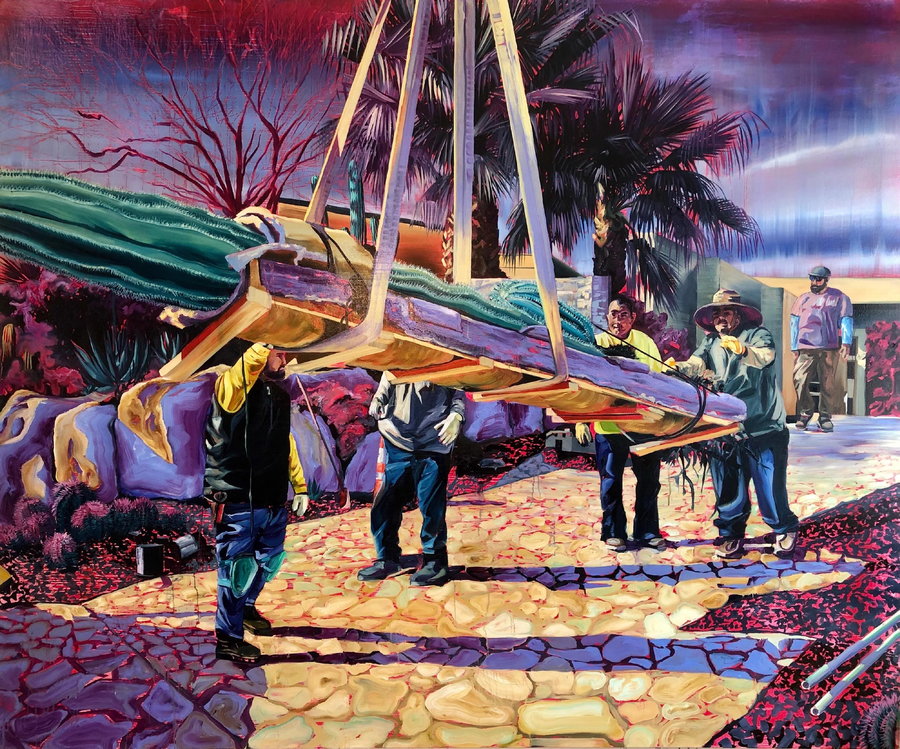 “At the crux of my work are considerations of ownership, domestic spaces, and the environment,” Southwick said in an It’s Nice That interview. “These three topics tend to be intertwined within my paintings, which, despite appearing on the surface as simple depictions of expensive homes, actually attempt to highlight the disparity that exists between these spaces and the workers who build them.” 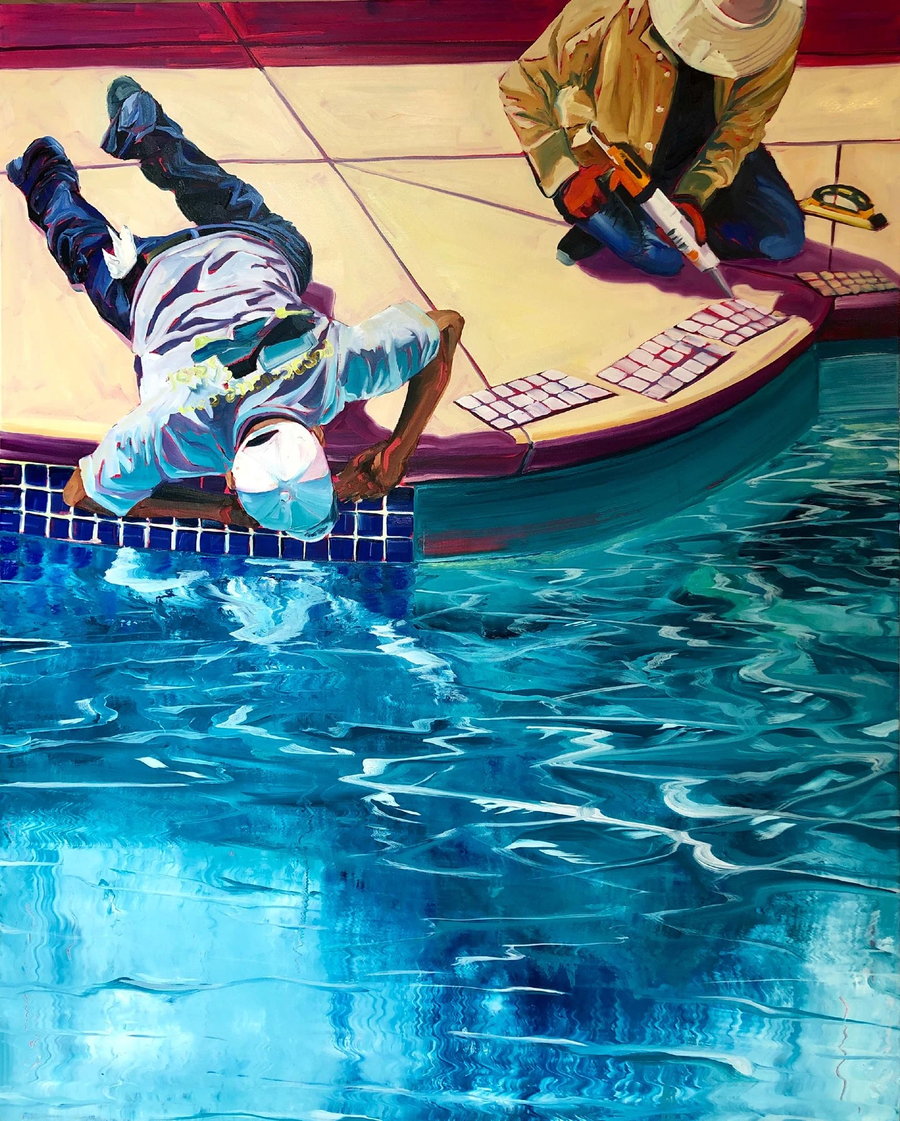 Southwick titled his collection “Querencia” after a Spanish word referred to in Ernest Hemingway’s 1932 novel Death in the Afternoon meaning “a preferred locality.”

“Querencia is a Spanish phrase which at its core means a space where you feel most comfortable and draw energy from,” explains the artist. “For example, in bullfighting, a bull will often circle the ring until it finds a place where it feels safe and strong – this is its querencia.” 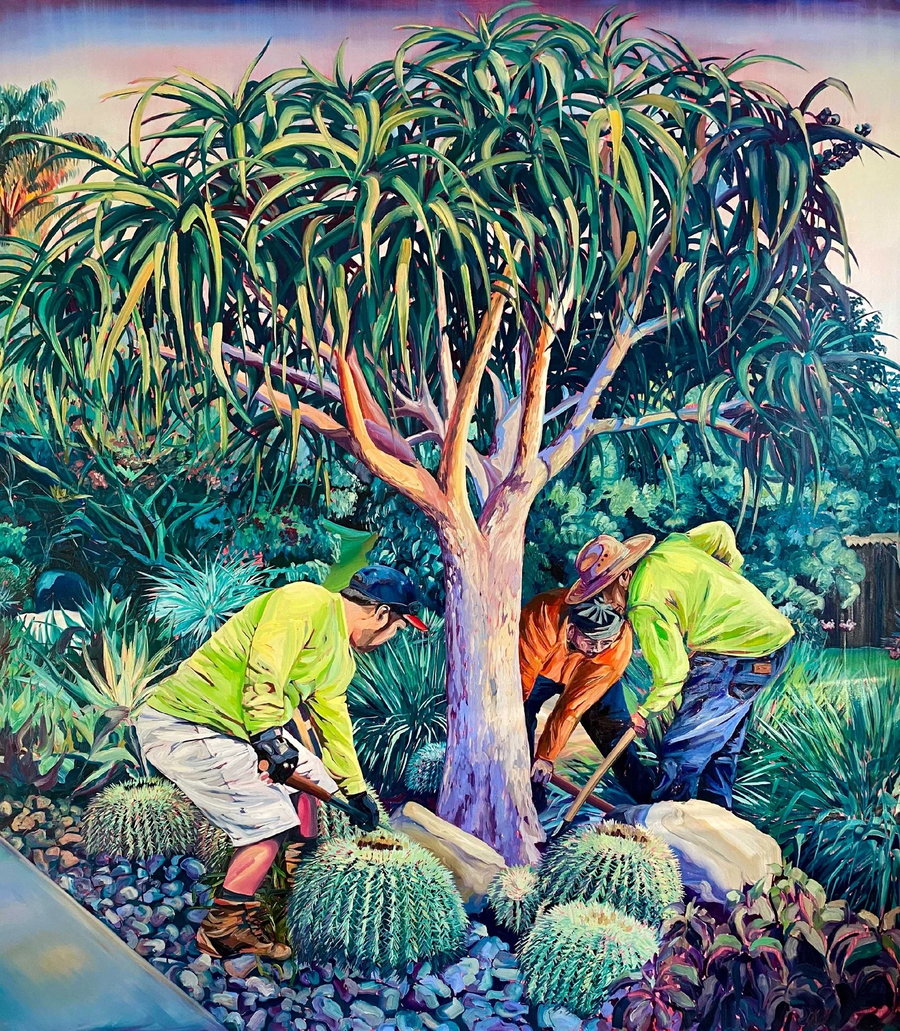 Humans, and especially the wealthy, spend much of their time trying to create these retreats from the world – but inherent in the friction between the art’s subject and title is the idea that the workers producing these extravagant spaces cannot call such spa-like havens home because of their economic situation.

“Their inclusion in these paintings highlights the disparity in aspiration and needs between worker and owner,” adds Southwick. “The laborers involved in the building projects are often an invisible workforce made up of immigrants, and I play on this invisibility.” 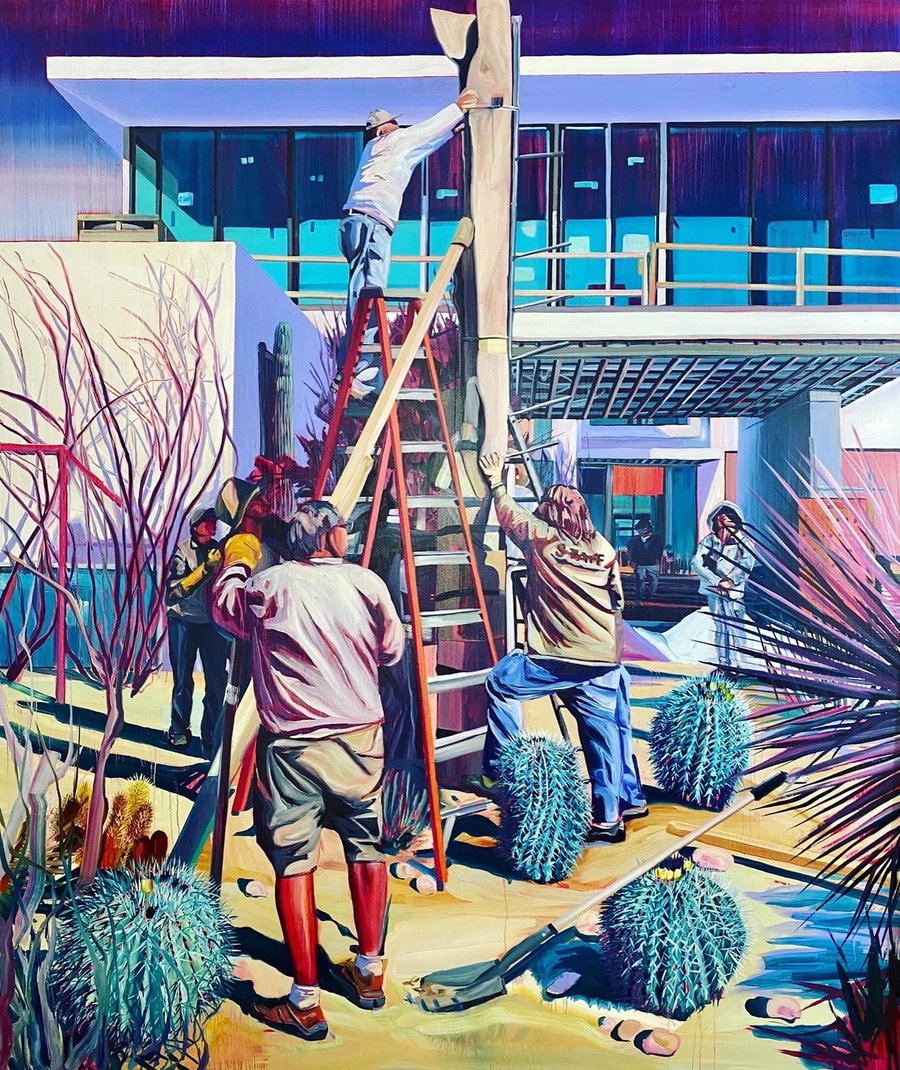 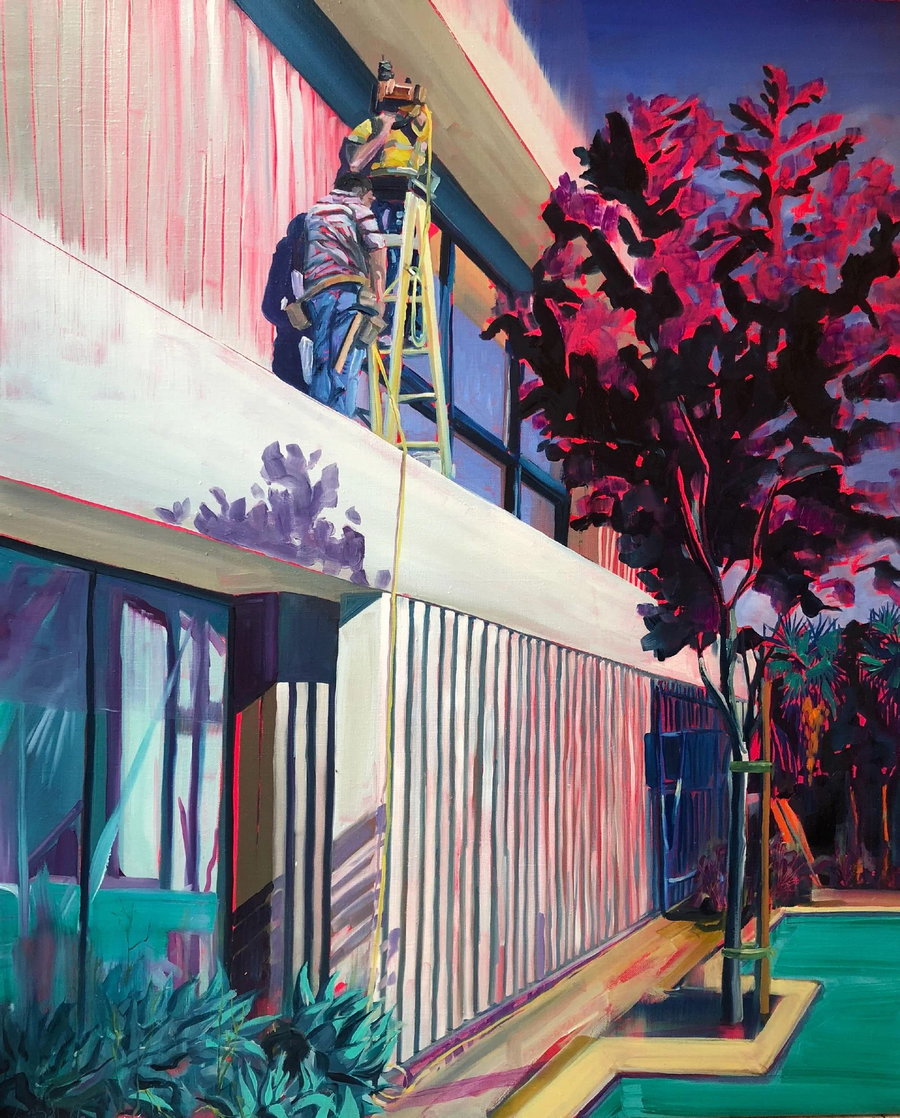 The source material for Southwick’s Querencia series comes from personal and commercial photographs from private-property construction sites in the Balrearic Islands off the coast of Spain. Swimming pools and exotic plants take the stage in many of the paintings, themselves status symbols of luxury and sanctuary. “I wanted to focus on the ideals that pools represent, their relationship to the Roman Empire, and how these classical notions have retained their relevance and prevalence,” the artist says.

In all the scenes, he uses vivid colors and dramatic contrast to depict both the warmth of the climate and also the visual conflict between bright, exciting hues and the actual life conditions of the laborers. Ultimately, the large-scale pieces ask viewers to confront the fact that the “perfection” of social media doesn’t actually exist, and to pay more attention to the real issues of life. 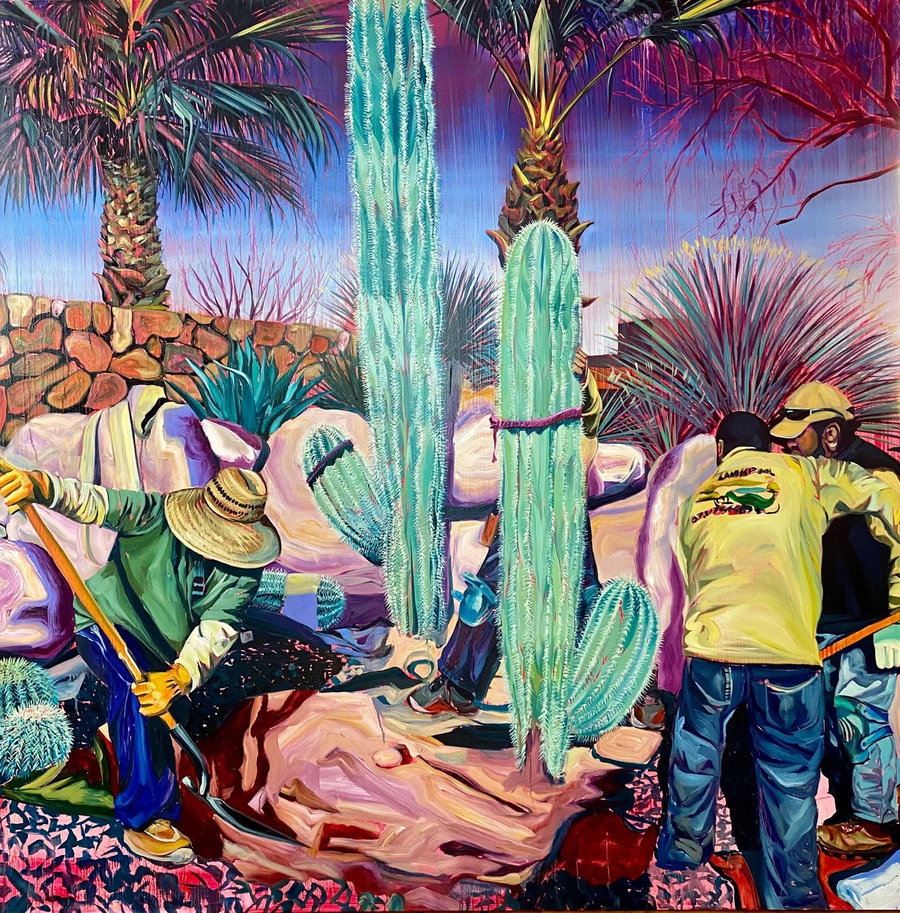 Southwick’s background includes attendance at the Glasgow School of Art, as well as a Fine Art degree with honors from Leeds Art University in 2018. He has showcased his work in over a dozen exhibitions since 2015.