Every metallic animal created by artist Barbara Franc has a sense of an individual personality. A horned owl glowers from atop an old black trunk. A startled cat is ready to leap out of view. A hen puts one foot forward in defiance against a tricksy predator. It’s only after taking in these traits that the viewer begins to notice all the small details that make each creature truly unique: the materials that go into them. 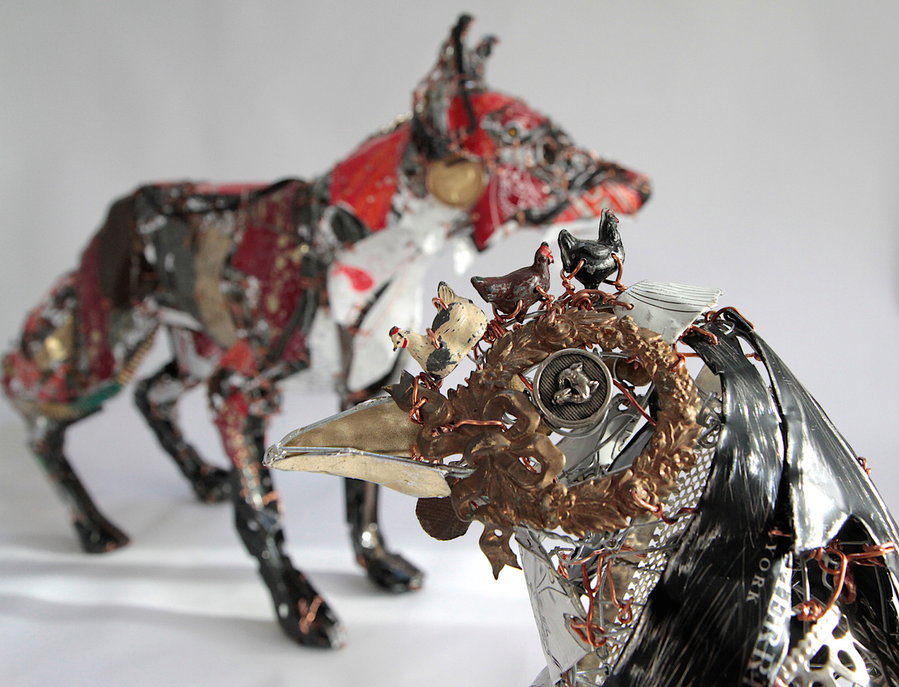 Lean in to really look at the hen, for instance. That’s a button for an eye, encircled by a golden wreath ornament. In the center of that button is the head of a fox, while the comb at the crest of her head consists of three tiny hen figurines. Her body contains a fork, a spoon, and maybe a kitchen sink, too. The fox, meanwhile, is made of old red tins. Visible on one panel along his back is the word “fox.” Franc adds that she used an old spectacle case and cutlery on his flanks, and surgical scissors and watch straps on his face.

On the head of a hare, another button-eye features a flying bird, and a gear on the muzzle calls to mind the pocket-watch-carrying White Rabbit from Alice in Wonderland. The griffin is Franc’s only mythological creature to date, which gave her a bit more creative license. Its components include “recycled metals, decorative tin, and various pieces of ‘found’ materials such as umbrellas, keys, bike spanners, cutlery, chainsaw blades, hinges, dog leads, and lawn mower parts.” 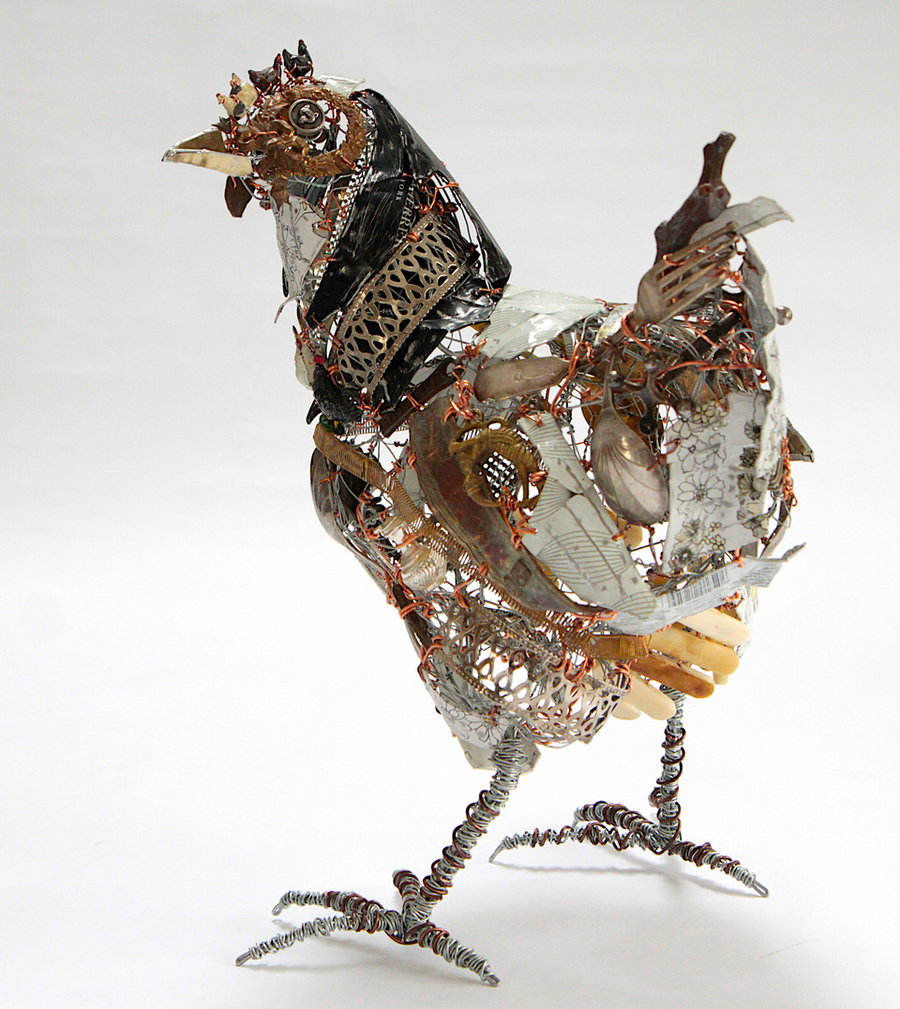 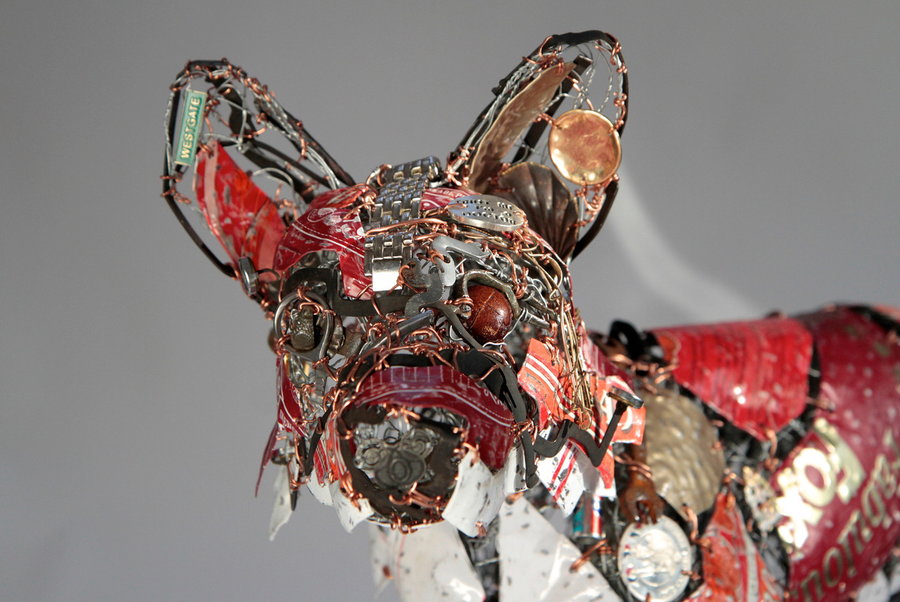 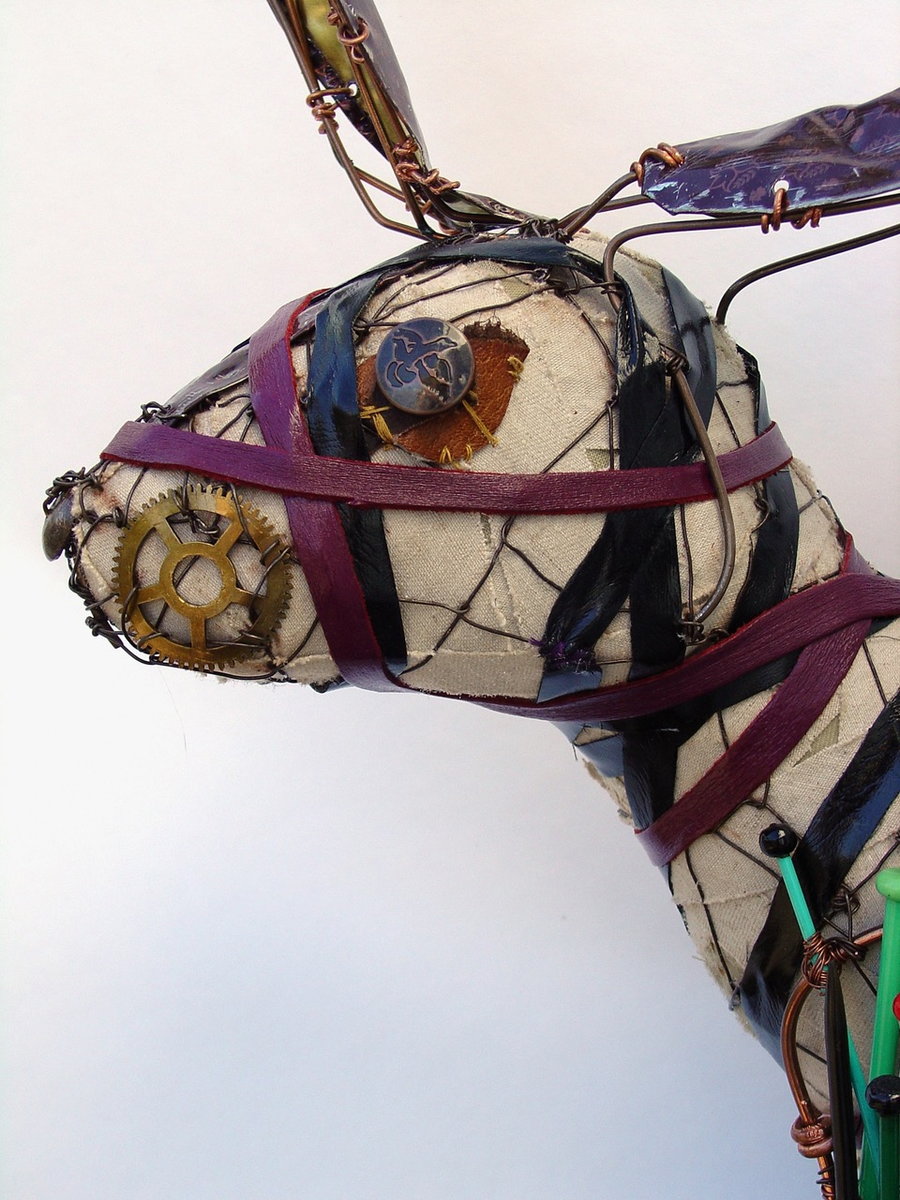 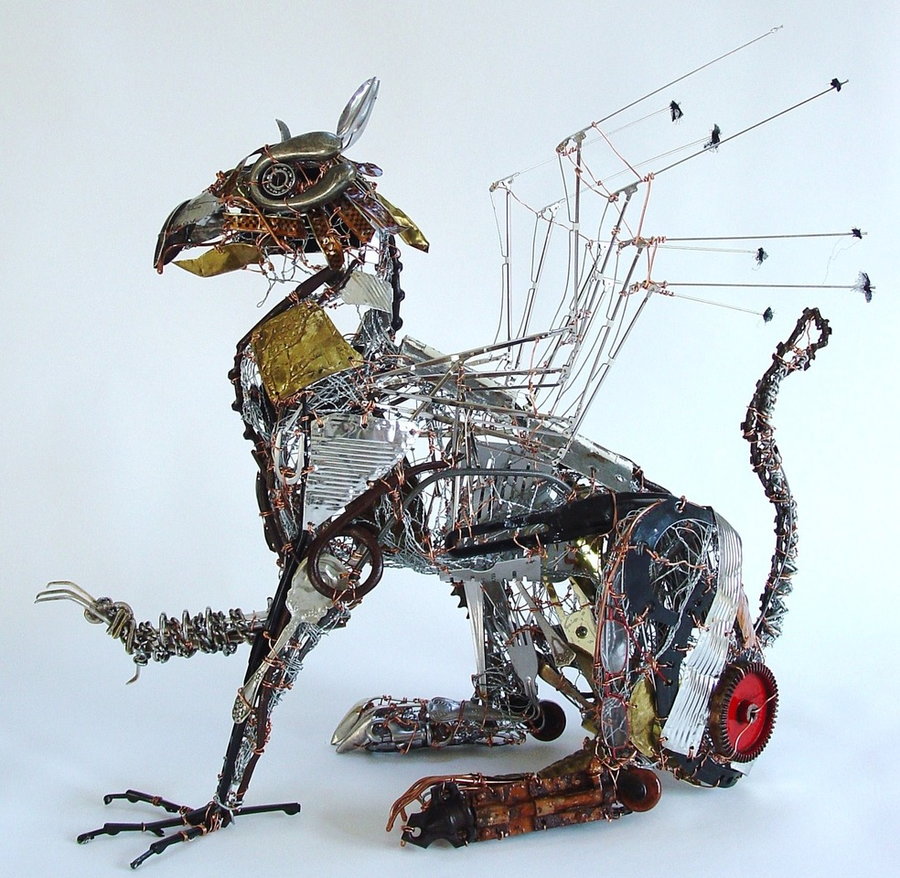 Based in London, Franc clearly has a knack for choosing just the right upcycled elements to incorporate into each life-sized character. She begins with a wire netting armature, filling out the shapes with all manner of junk. Her process is intuitive, led by what she has on hand, what fits each part of the animal’s body, and species-appropriate symbols and imagery.

Picking out each object is part of the fun of viewing Franc’s metal menagerie, but their underlying structures are interesting, too. It’s cool how she leaves much of the armature visible, owing in part to her admitted fascination with skeletal systems and the mechanics of motion. 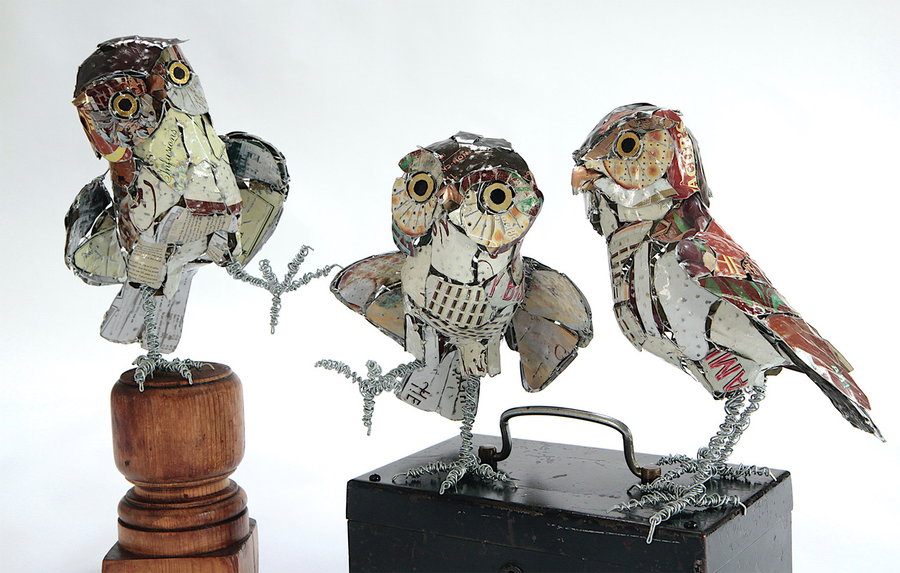 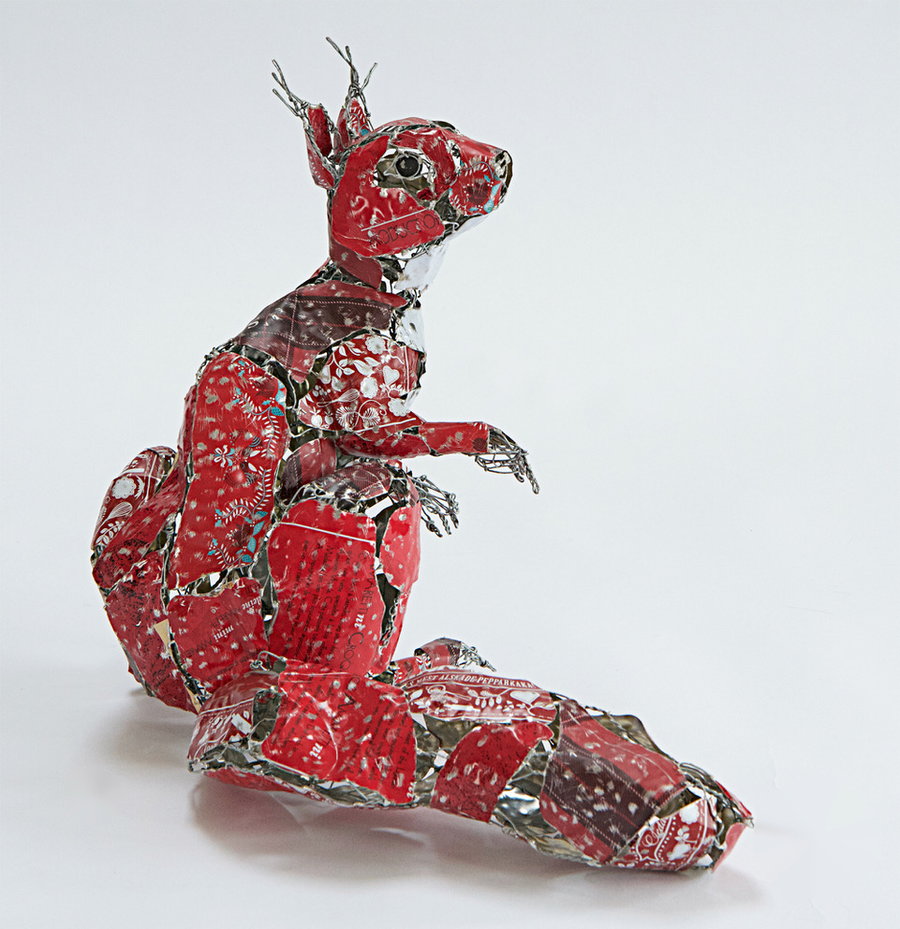 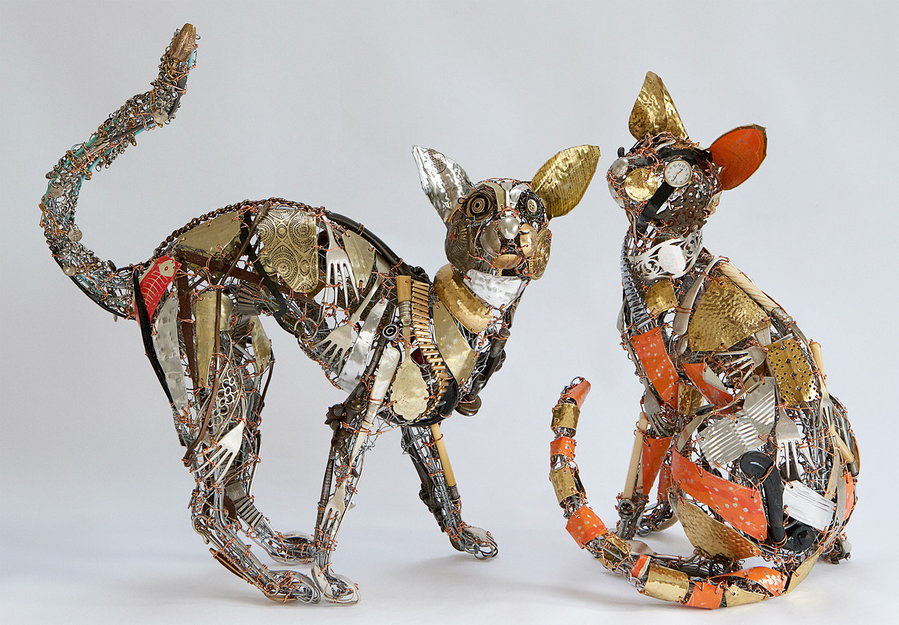 “I have always been fascinated by the sculptural form and shapes of animals, they present a never-ending source of inspiration to me,” she says. “I try to capture a feeling of their movement and presence in my sculpture. For this I use wire and other materials in a way that suggests drawing in three dimensions. This allows me greater freedom to add changes whenever I want during construction to keep the feeling fluid and to reflect the diversity of movement and form. I increasingly use recycled and discarded materials as I enjoy the challenge of transforming something with a past history into something new and exciting.” 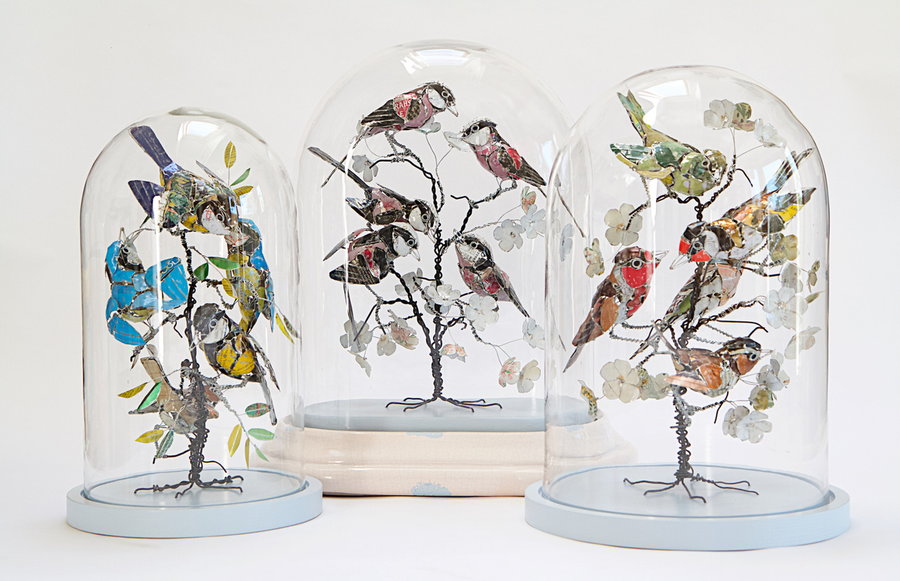 If you love Franc’s creations and want to adopt one as your own, you’ll be happy to know she sells them periodically through her online shop, with smaller animals like birds listed around £180. Keep an eye out for more additions on her Instagram @barbara.franc.