As former residents of the destroyed city of Mosul, Iraq fight to rebuild after being liberated from ISIS/ISIL, architects are coming together to create some sorely needed temporary shelters and facilities for them. An open international ideas contest organized by Archstorming has already yielded some innovative proposals, including quick-deploying protective frameworks to support fabric tents, a flexible and easily expandable scaffolding city, and a stunning new “Tower of Babel” inspired by the Biblical passage Genesis 11, which reads “Then they said: ‘Come, let us build ourselves a city, with a tower that reaches to the heavens.’” 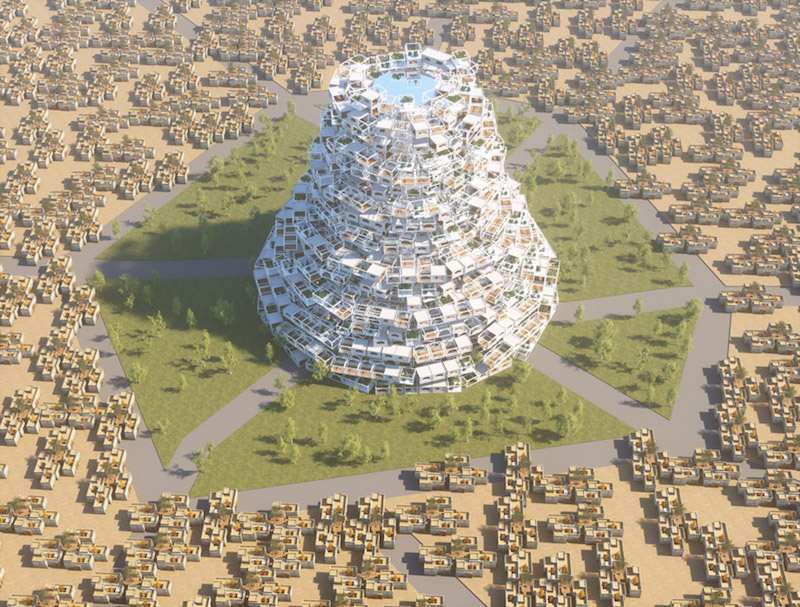 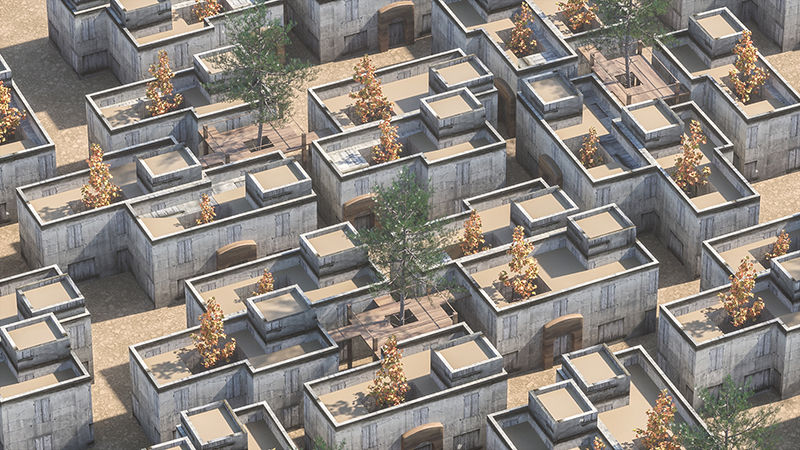 Mosul has suffered catastrophic damage since 2014, when ISIS chose the city’s Al-Nuri Grand Mosque as the place where they would declare the Islamic Caliphate. But as the conflict winds down and the streets grow quieter, residents are slowly moving back in, with thousands more expected to arrive soon enough. With so much of the city in ruins, the people who once thrived in Mosul now find themselves feeling like refugees in their own home. The Mosul Postwar Camp competition sought infrastructure that could shelter all the people who wished to return while their residences were being rebuilt.

Archstorming has divided refugees’ needs into two categories: “Urgent Humanitarian Aid,” which can reunite families and provide them with basic assistance and living spaces along the Tigris River, and the “City Reintegration Zone,” which aims to settle refugees back into society and help give them secure futures. Hundreds of architects and architecture students from all over the world participated in the competition, and the winners were announced in December of 2017. 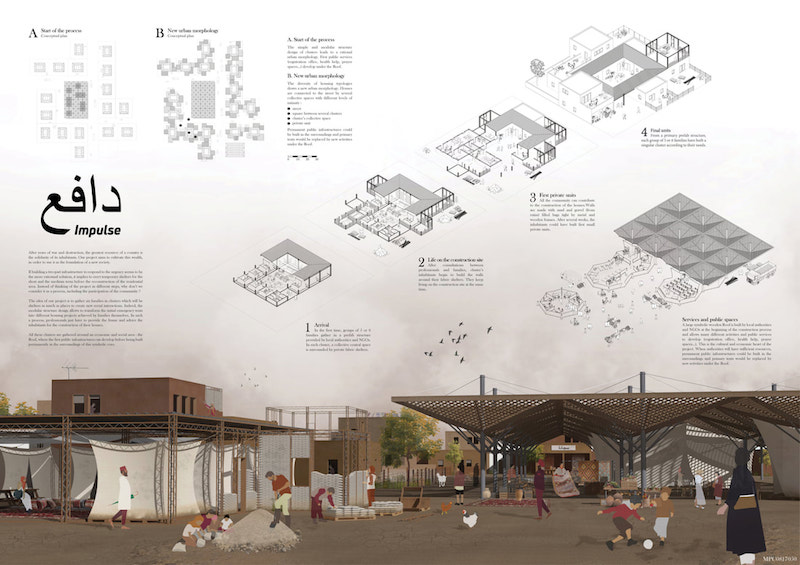 Taking first prize is “Impulse,” which proposes a “new urban morphology” that can immediately accommodate refugees within a simple framework and indefinitely continue to grow, expand, and become more comfortable over time, adding both private and public units to itself as needed. Everyday life would go on right within the construction sites with minimal disturbance to residents.

The second prize winner is “Scaffolding City” by Quang Le, and third prize went to Zhao Yifan and Han Shuo for “Always Growing,” both of which employed similar flexible concepts. 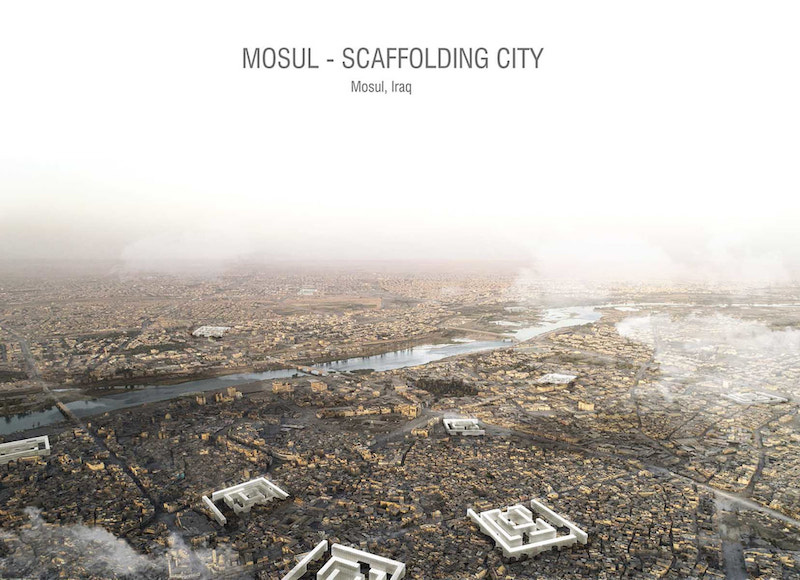 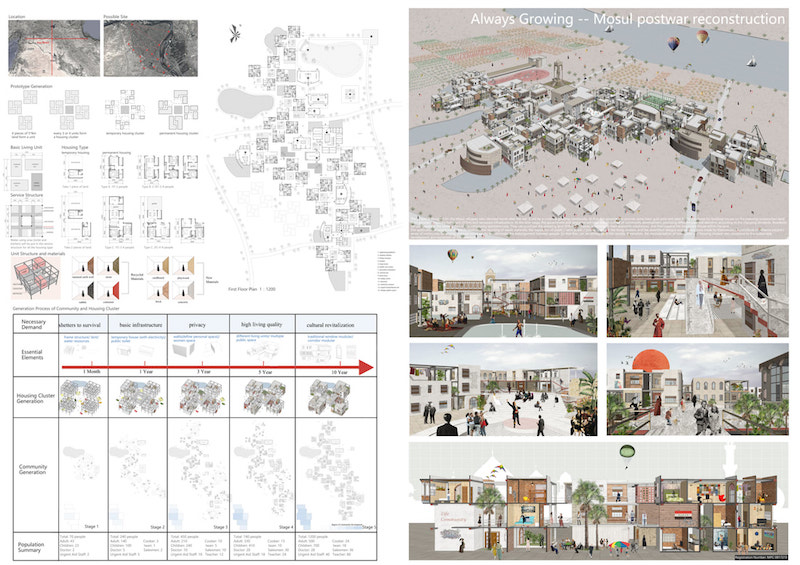 “It is not a completely disturbed society as it is in refugee camps, because people in postwar camps have known the city where they were born,” says Le of Scaffolding City. “However, it is not the same as any social housing system because its social foundations and urban infrastructure may have been ruined. Therefore Mosul Postwar Camp needs to have flexibile, easy-to-change elements that are impermanent in shape but permanent in their ability to change. In the case of Mosul, this system should be able to infect, spread, and expand.”

“In the process, the camp itself would undertake the task of cleaning and rearranging the ruined parts of the city during the war. Thanks to this idea, we proposed a flexible model, which is not only a residence of the people, but also helps them to reform and repair their city systematically because the peoples here are the ones who understand their city better than anyone.” 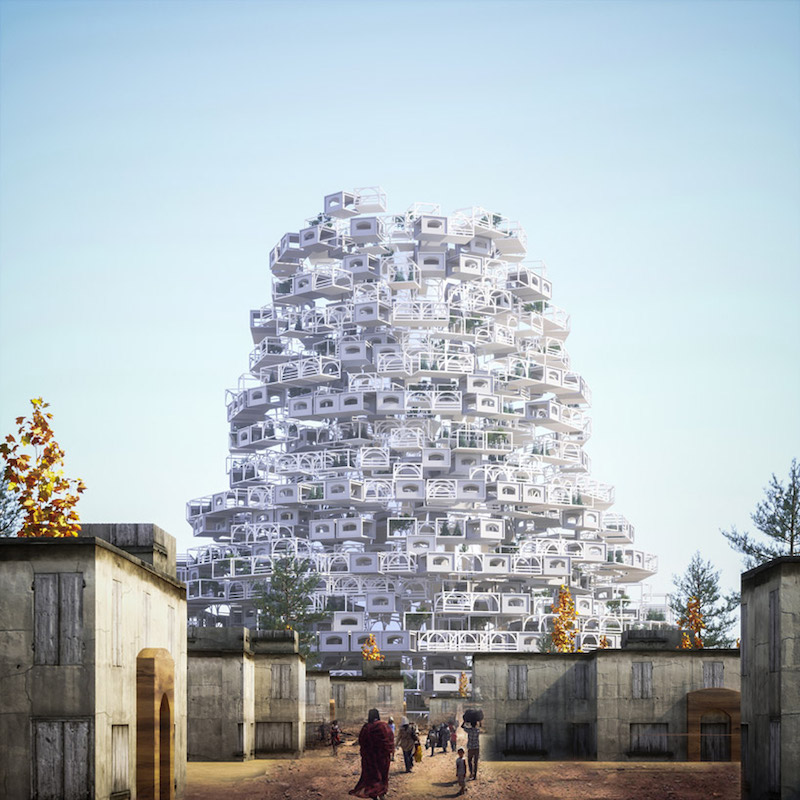 One entry that didn’t quite win a major prize but caught a lot of attention for its unusual approach was the “New Babel Tower” by Kurtulus Göktas, Mohamed Abdellatif, and Demet Karabacak. This proposal creates a dialogue between the different people living both in the tower and in residential clusters surrounding it. The tower would serve as a temporary residence for refugees while their homes were being rebuilt and would stand as a war monument once it was no longer needed, referencing the city’s rich history in the same fertile crescent where the original Tower of Babel is said to have stood.