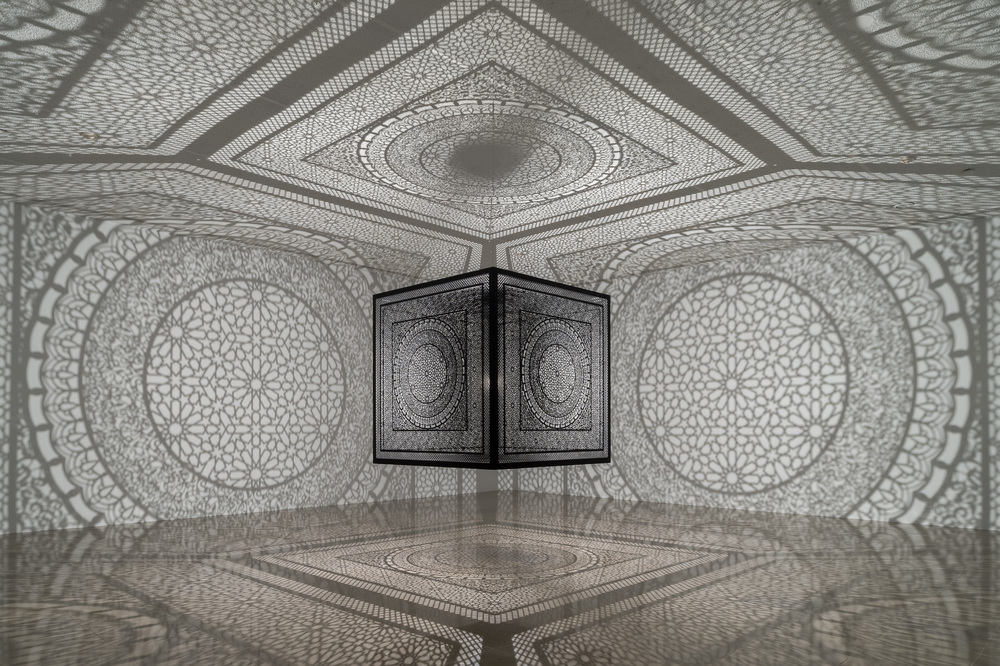 A single light bulb may not sound large enough or bright enough to decorate the entire interior of a large room, but artist Anila Quayyum Agha accomplished just that. Her installation, Intersections, was the winner of Artprize 2014 at the Grand Rapids Art Museum in Michigan. It might just be the single most beautiful cutout lamp ever created, but it’s also so much more than that. 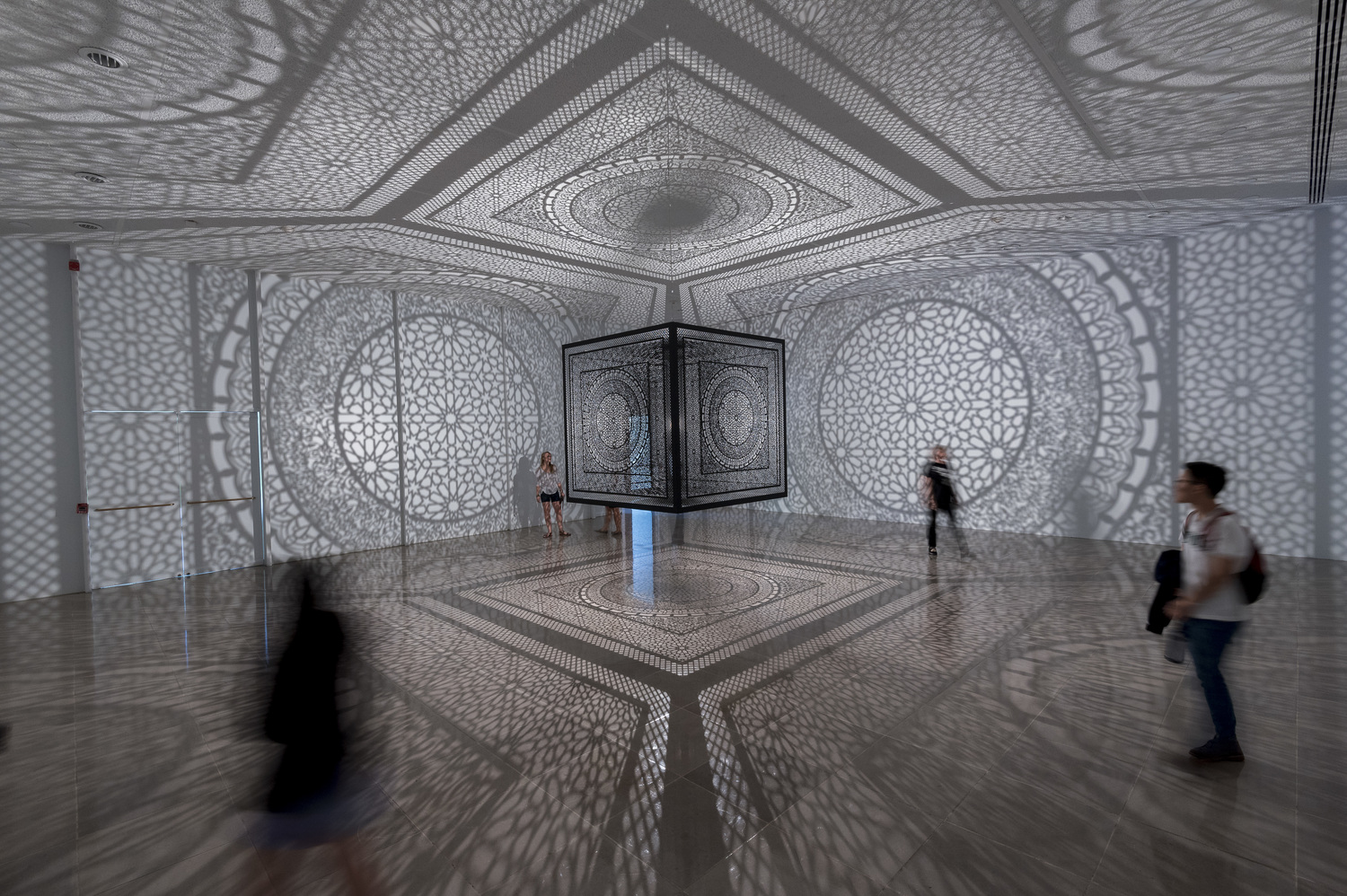 The piece consists of a 6.5-foot laser cut wooden cube hanging from the ceiling. The wood is punctured with intricate lacy patterns across every surface. A single light source hangs in the middle of the cube, illuminating it from the inside. 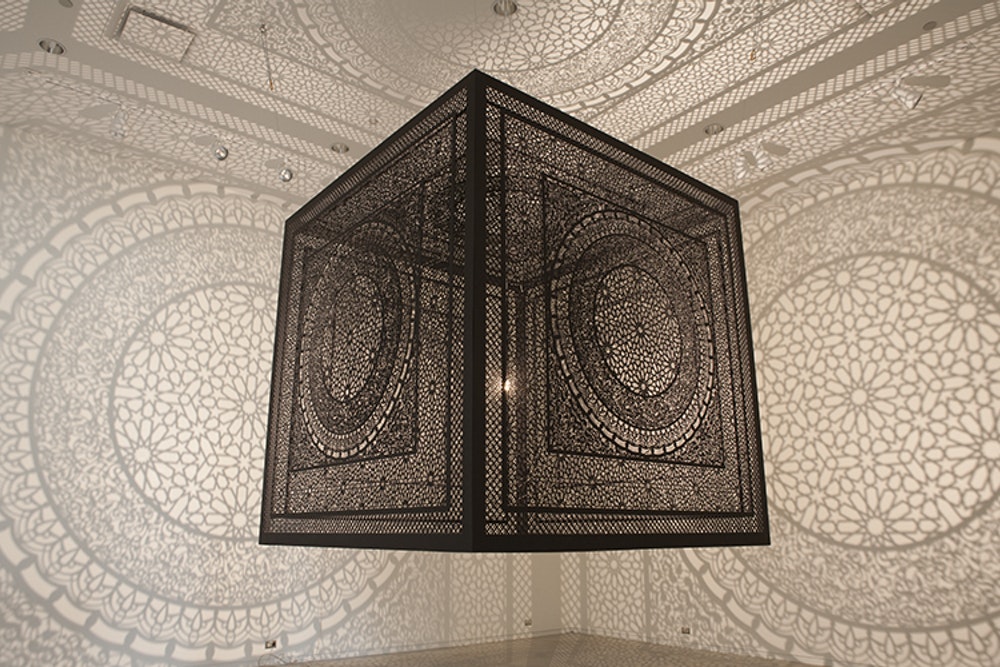 https://vimeo.com/142321235
This single light throws spectacular shadows that decorate every surface of the room the sculpture is in. Among the many wonders of this piece is the fact that it will change and give an ever-so-slightly different effect in every space depending on the architecture of that space.
Intersections was inspired by the artist’s childhood as a Muslim woman growing up in Pakistan. She describes her life as one of “wonder and exclusion.” The piece is inspired by a pattern from the Alhambra, a Mosque where Islamic and Western influences intersect, and it displays the interplay between shadow and light, public and private, and static and dynamic. 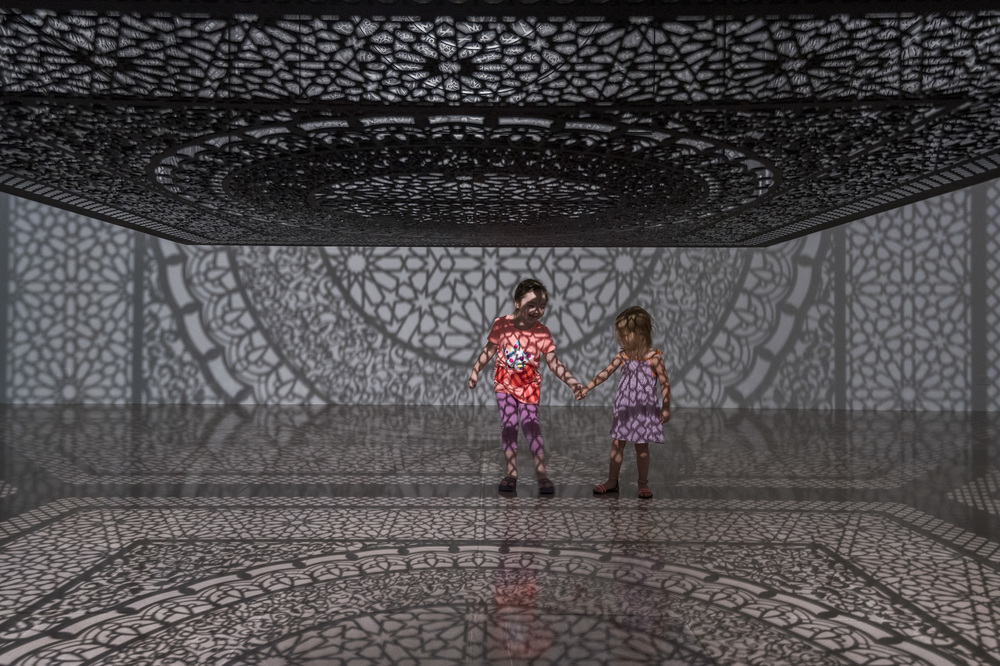 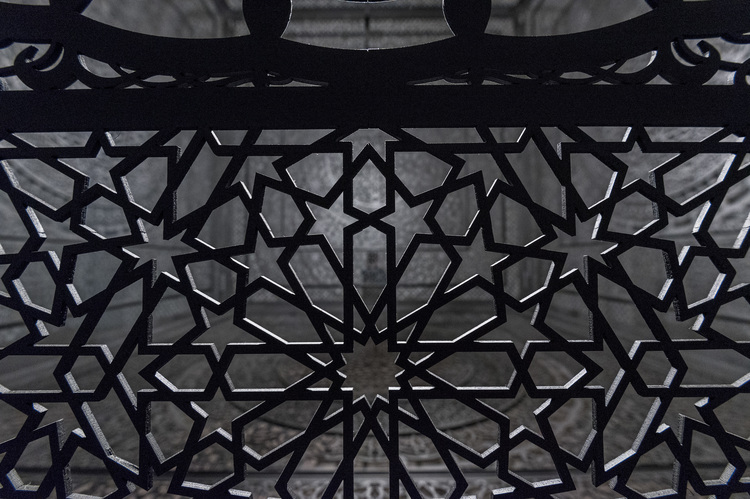 Continue reading below
Our Featured Videos
Rice Gallery explains how Agha translated her own feelings into such a spectacular and unforgettable Islamic art installation:
“Pakistani-American artist Anila Quayyum Agha uses light and cast shadow to transform Rice Gallery into a place that alludes to Islamic sacred spaces dense with geometric ornamentation and pattern. Intersections was inspired by Agha’s visit to the Alhambra in Granada, Spain. Built in the 9th century as a castle fortress, the Alhambra fell into ruin before being restored and reconstructed from the 11th – 15th centuries by rulers of the last Muslim dynasty in Spain. Today, the Alhambra is a UNESCO World Heritage site where visitors can marvel at interiors in which every surface is covered with the complex, interlacing designs of Islamic art.”
“The beauty of these spaces caused Agha to reflect upon her childhood in Lahore, Pakistan where culture dictated that women were excluded from the mosque, a place of creativity and community, and instead prayed at home. She says of her Alhambra experience, ‘To my amazement [I] discovered the complex expressions of both wonder and exclusion that had been my experience while growing up.'”