Last year, IKEA released a digital archive of every single one of its annual catalogs dating back to the year 1950. What began as a black and white leaflet with text written by IKEA founder Ingvar Kamprad himself transformed into the brand’s familiar staged rooms showing off the items in each new collection. Each one is like a time capsule of decor trends, the clean lines of midcentury modern design morphing into the oversized shapes and candy colors of the 1980s and back toward minimalism by the 2000s.

Household Quotes took a deep dive through all of these back catalogs to examine exactly how living rooms evolved across generations, revealing not just what people liked their spaces to look like, but how much it cost to furnish and decorate the entire room each year (adjusted to reflect inflation). The UK-based website produced realistic renders for every decade, putting together its own scenes featuring the most iconic furniture pieces at the time. 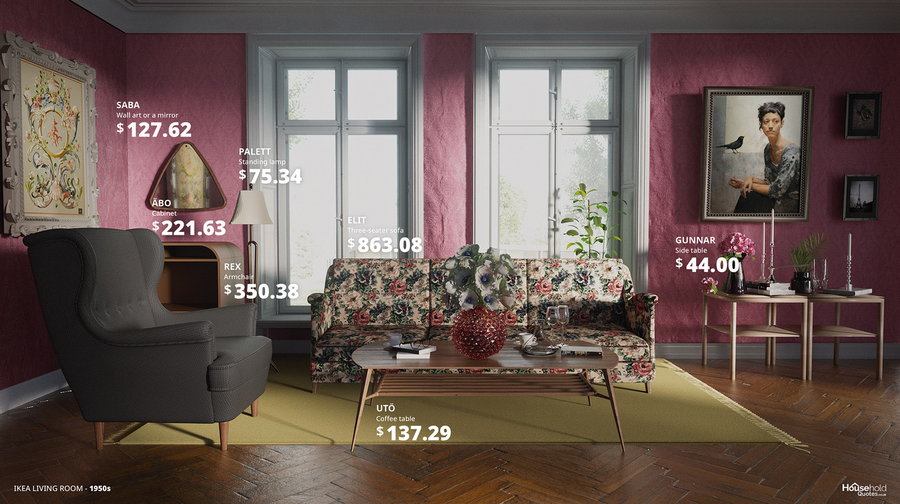 Recognize that armchair? The Rex, which cost the equivalent of $350.38 in 1950, looks almost identical to the Strandmon chair available today for $279, reflecting the fact that classic design never really goes out of style. Ornate photo frames and a delicately proportioned upholstered couch add decorative touches, but the star of the show is definitely the UTÖ coffee table. Quite a bargain at just over $135 and made of elm wood, it looks like it could be in the showroom of a much higher-end furniture store today for a lot more money. The total cost of this room is $1,819.34. 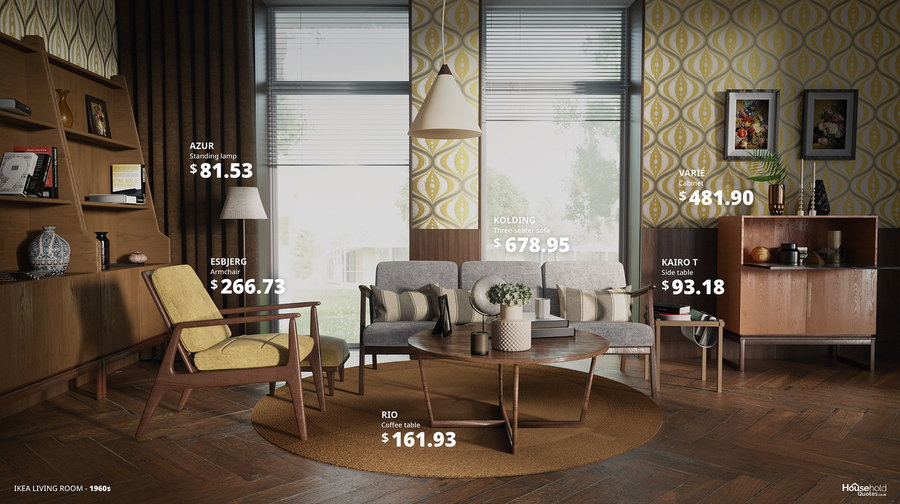 Check out the mod wallpaper and enviable midcentury modern pieces available during the 1960s. Doesn’t it make you wish you could order straight out of that catalog? This selection brings together neutral tones and a whole lot of wood, toning down the upholstery to let the form of each piece steal the limelight. The RIO coffee table ($161.93) was made with entertaining in mind, treated with a plasticized finish to withstand all the cocktail parties people indulged in back then. The total cost of this room is $1,764.22. 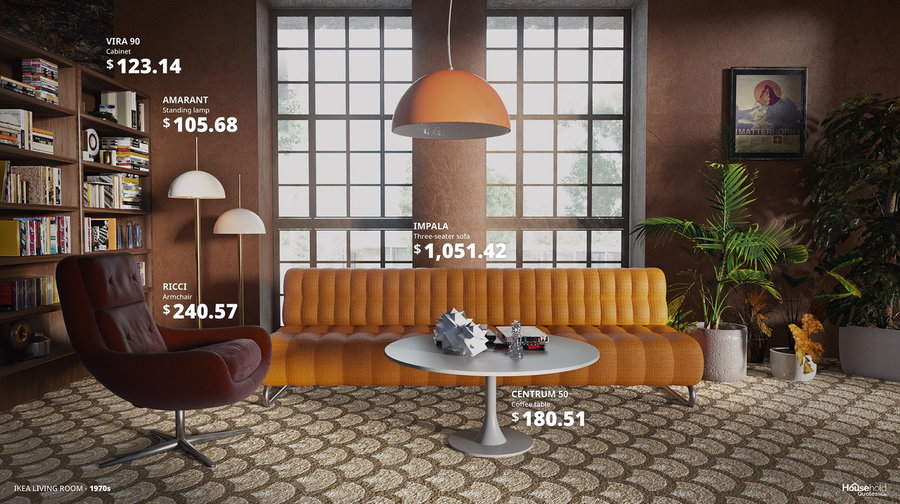 By the 70s, IKEA’s offerings were getting a little groovier. In the original catalogs, you’ll find all kinds of humorously dated pieces, like bulging couch cushions covered in hideous brown fabrics, but also styles that are trending today, like cane and rattan. Household Quotes chose items that are decidedly 70s but wouldn’t necessarily look out of place mixed into a contemporary living room, like the CENTRUM 50 coffee table ($180.51). The total cost of this room is $1,701.32. 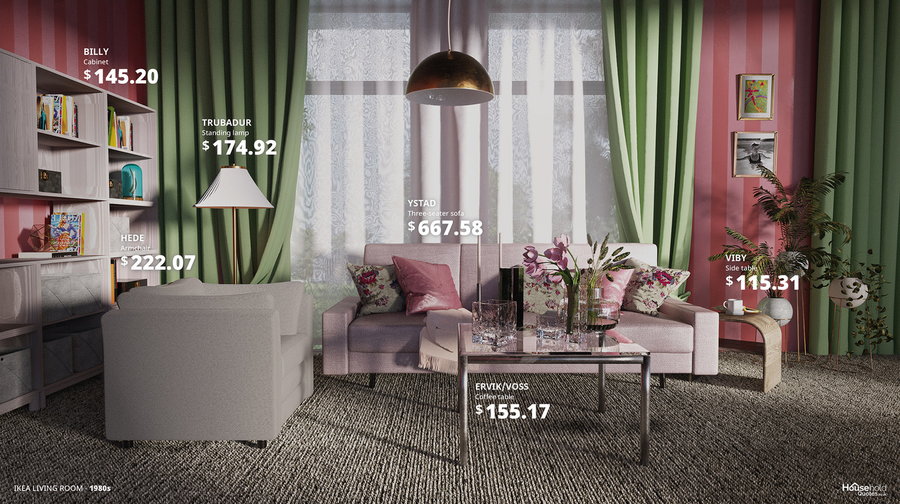 We’re not ready for 1980s-style couches to come back anytime soon, are we? The YSTAD three-seater sofa is one of the mildest of IKEA’s living room seating offerings from that era, which included a whole lot of loud prints. The ERVIK/VOSS coffee table exemplifies the kind of metal and glass combinations that were popular at the time. You might recognize the BILLY cabinet, which first appeared in 1979 and has now sold 41 million units. This room cost a total of $1,480.25, the second-most affordable era in IKEA design. 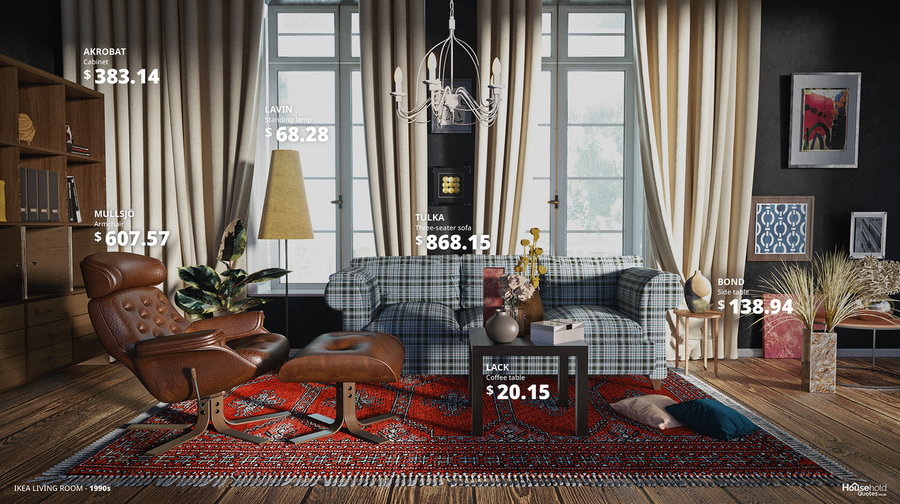 Not exactly a decade known for design that stands the test of time, the 90s produced a mishmash of styles that started off unabashedly bold and bright and became much more simple and utilitarian by 1999. This collection includes some head-scratchers, like the LAVIN standing lamp and odd MULLSJO armchair, but also the well known LACK table, one of IKEA’s most affordable pieces of furniture ever produced. Priced at around $20 back then, it’s now down to $9.99 for the same size and shape. This room cost $2,086.23 to put together. 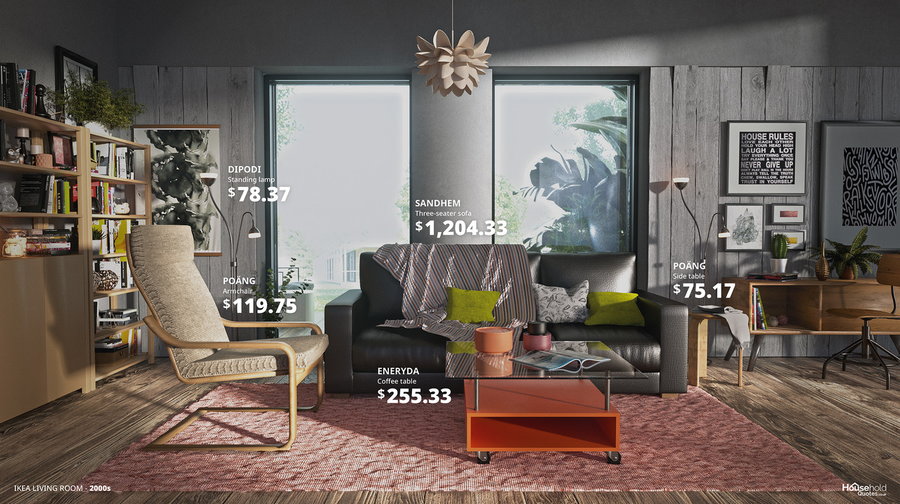 By the 2000s, IKEA had found its design stride with pieces they’ve kept around in the ensuing decades. Favorites like the POÄNG armchair, originally offered in 1976, have come to exemplify the brand’s visual identity. This was also the decade when IKEA really started to expand into the United States, which is now its second-largest market after Germany, cementing its aesthetic into our cultural consciousness. This room cost $1,732.95. 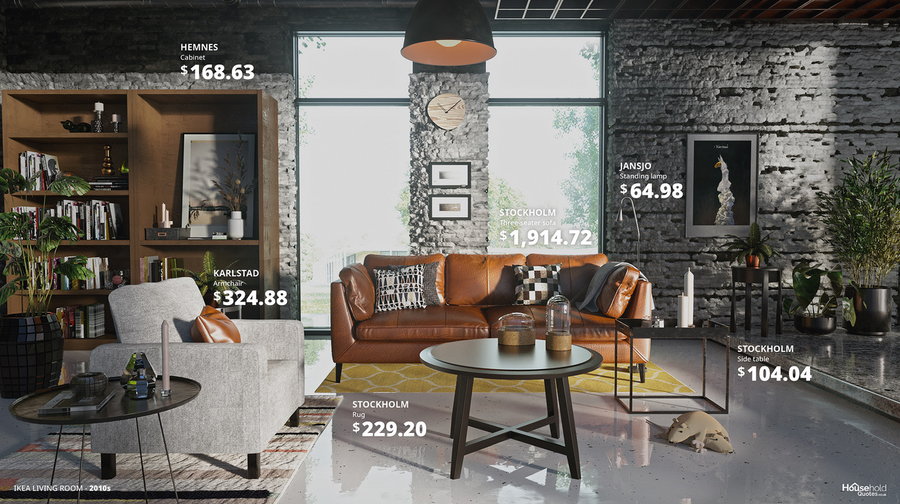 The most expensive decade to furnish your home entirely with IKEA finds at $2,806.45, the 2010s brought back the brand’s beloved STOCKHOLM range, a premium collection featuring a distinctly Scandinavian aesthetic. This wool STOCKHOLM rug ($229.20) will likely become one of many in the collection’s history to end up a rare and desirable commodity in the decades to come. The leather STOCKHOLM sofa is another piece with high potential to age beautifully, with leather that “becomes softer and acquires a darker tone in time.” 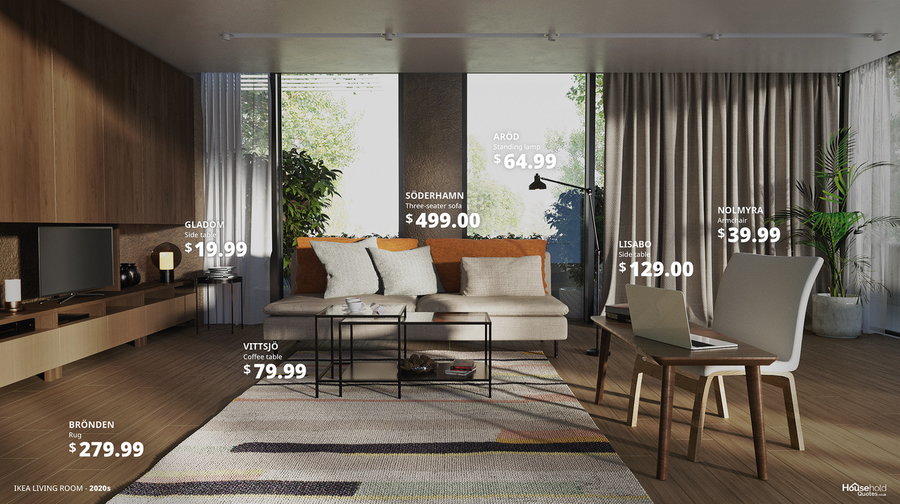 We’re just two years into the current decade, but so far, it’s the most affordable time in the brand’s history to get absolutely everything you need from IKEA. This room totals $1,112.95 and illustrates how the Swedish retailer has crafted a contemporary aesthetic that’s minimalist yet warm, with an increasing focus on sustainability.