The Saint Nicholas Greek Orthodox Church, the only church in New York City’s World Trade Center Plaza, has been given new life two decades after being destroyed in the 9/11 attacks. Originally erected in 1916 and later surrounded by the World Trade Center buildings, the church is reopening not just as a place of religious worship, but also as a national memorial for visitors to remember and reflect on the tragic events of September 11th. 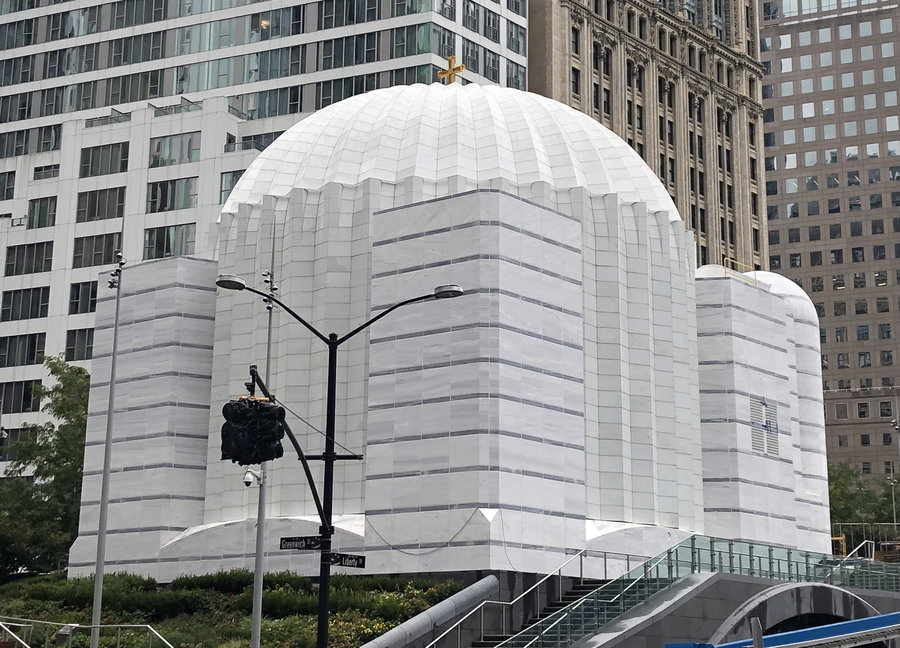 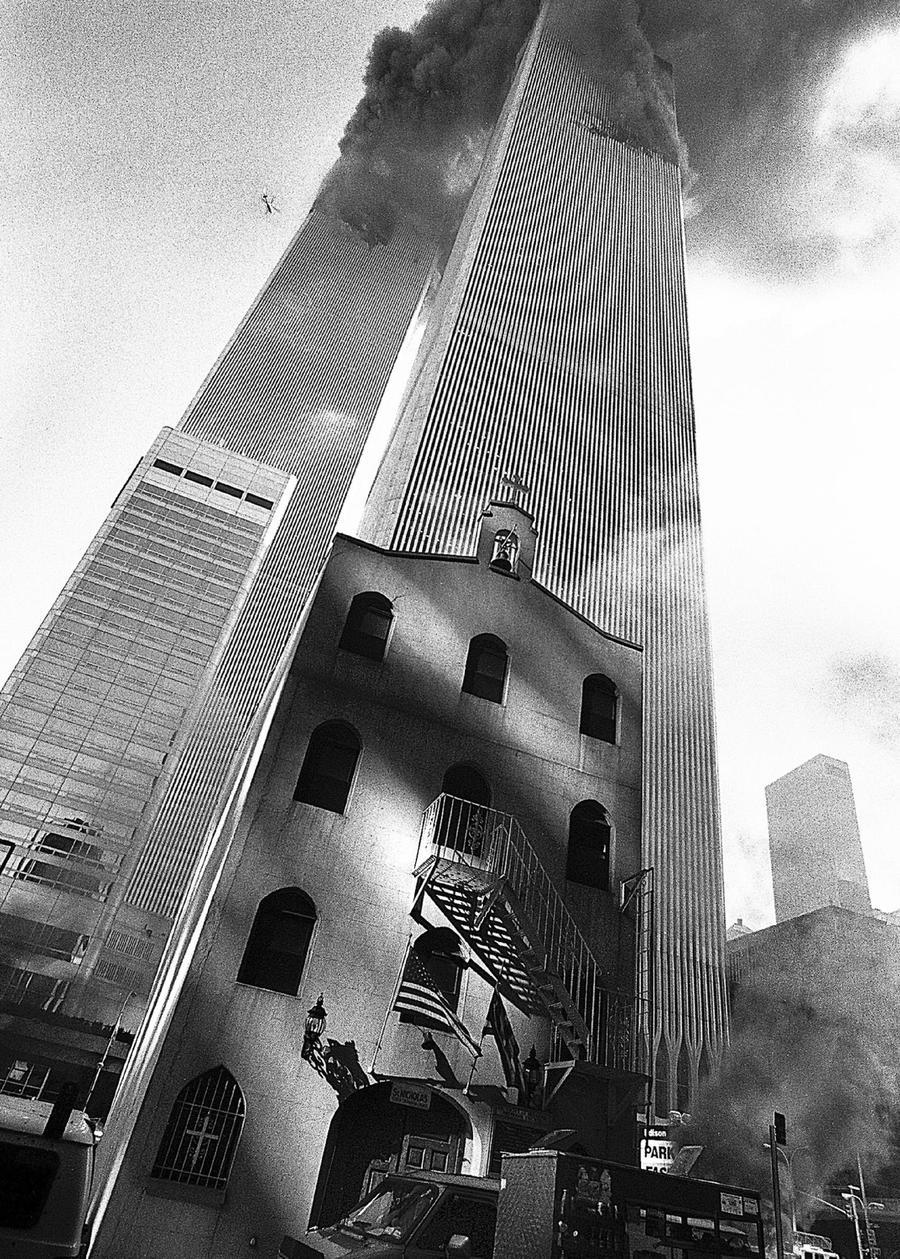 “To see the Saint Nicholas Greek Orthodox Church and National Shrine finally open is emblematic of Lower Manhattan’s storied future and defining past,” says Santiago Calatrava, the architect who designed the structure. “I hope to see this structure serve its purpose as a sanctuary for worship but also as a place for reflection on what the city endured and how it is moving forward.” 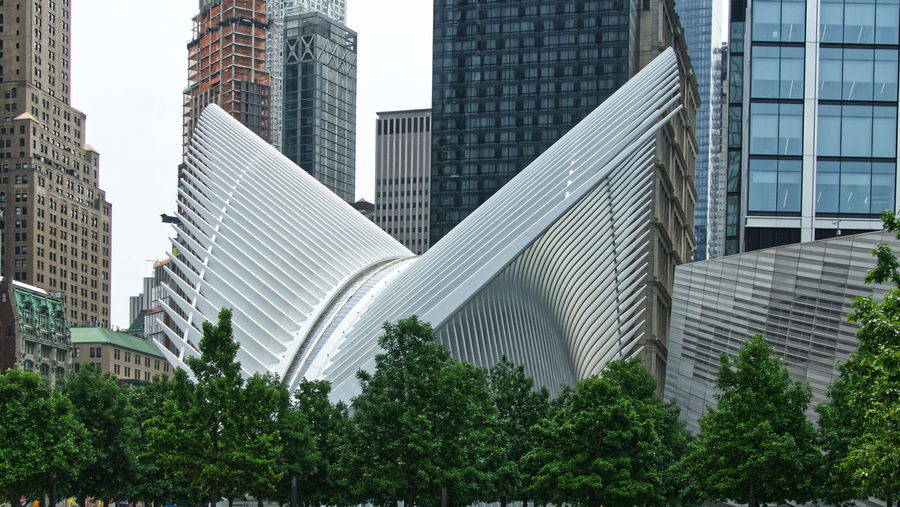 Calatrava and his eponymous firm also designed and rebuilt the WTC’s “Oculus” transportation hub, which opened in 2016. The station’s arched wings “symbolize a dove released from a child’s hand,” or a phoenix rising from the ashes.

The Saint Nicholas church design is similarly intended to evoke the ideas of strength, resilience, and light, according to Calatrava. “Architecture can have an intrinsic symbolic value, which is not written or expressed in a specific way but in an abstract and synthetic manner, sending a message and thus leaving a lasting legacy,” he notes. 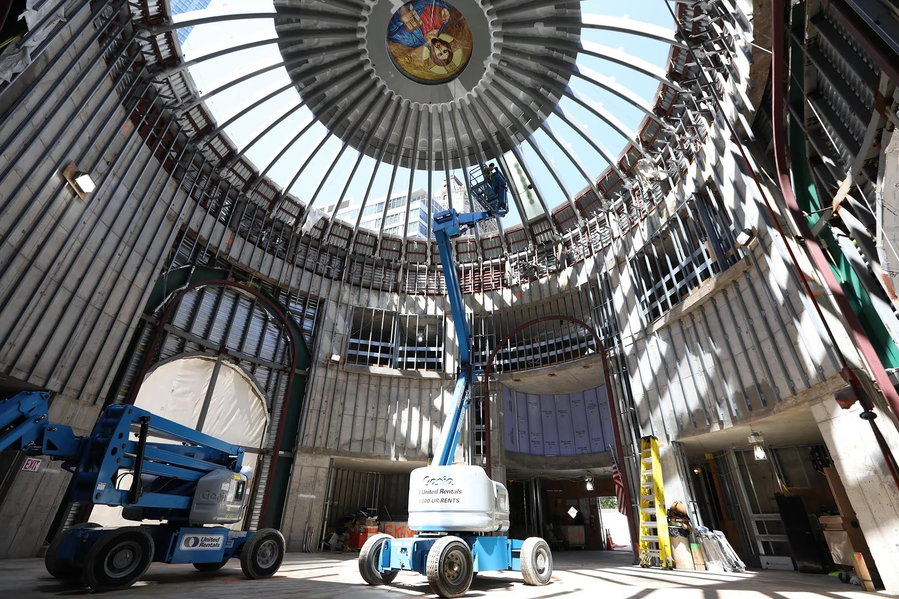 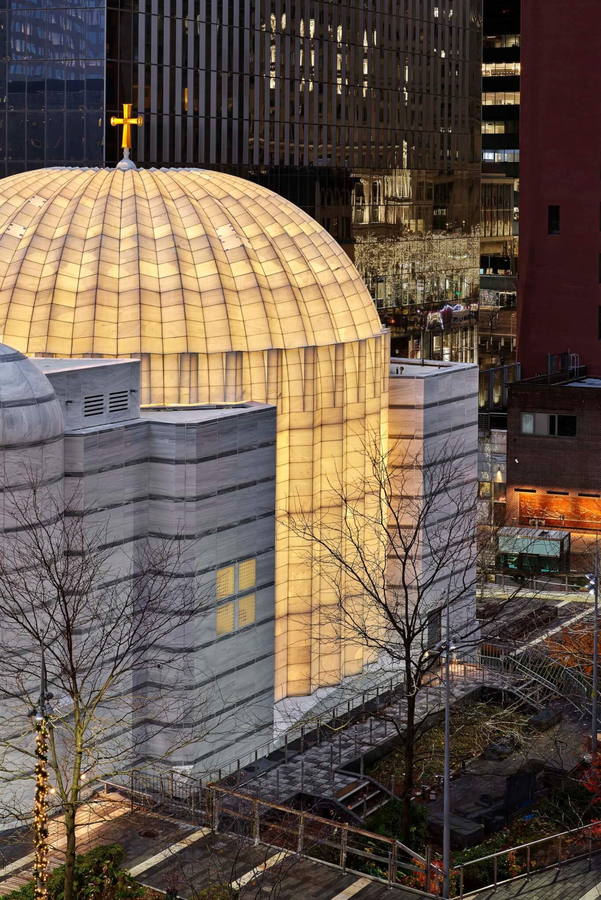 Taking architectural cues from another well-known Greek house of God, the Hagia Sophia in Constantinople, the new church features four stone towers that support and surround a large inner dome. Calatrava also chose to sheath the towers in Pentelic marble, the same material that makes up the Parthenon in Athens.

The ridged dome is constructed from thin stone and laminated glass panels. Thanks to the lighting inside the church and behind the stone, “the entire church appear[s] to glow from within, invoking the feeling of being a beacon of hope amid the night.” 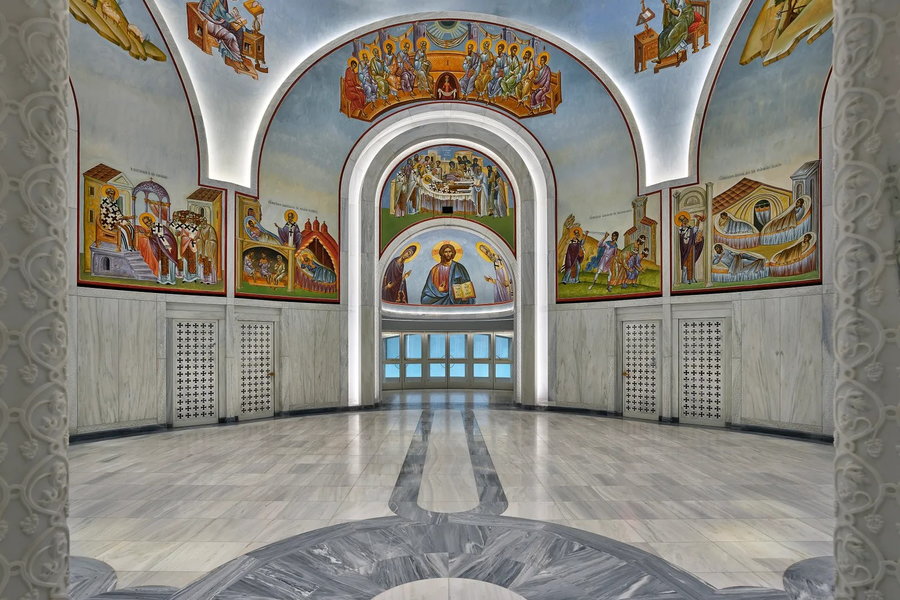 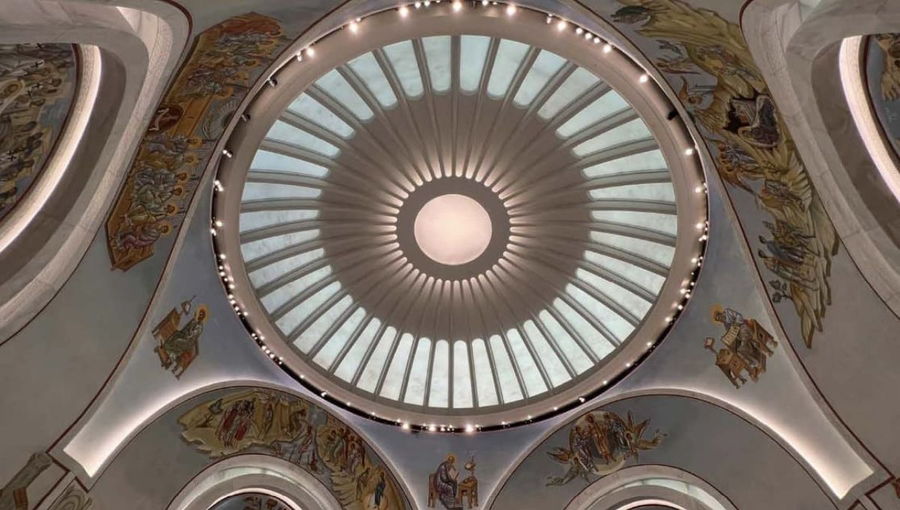 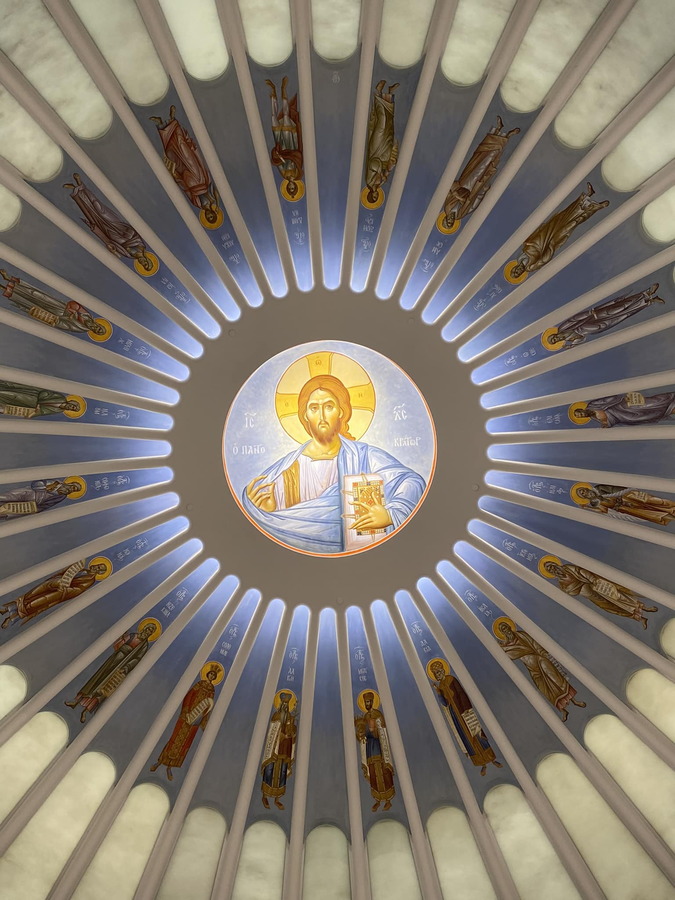 The interior includes more Byzantine-influenced design, with 40 windows and structural ribs and a glass painting of Christ in the center of the dome’s ceiling. In between the ribs is iconography of 20 prophets in traditional Byzantine colors. 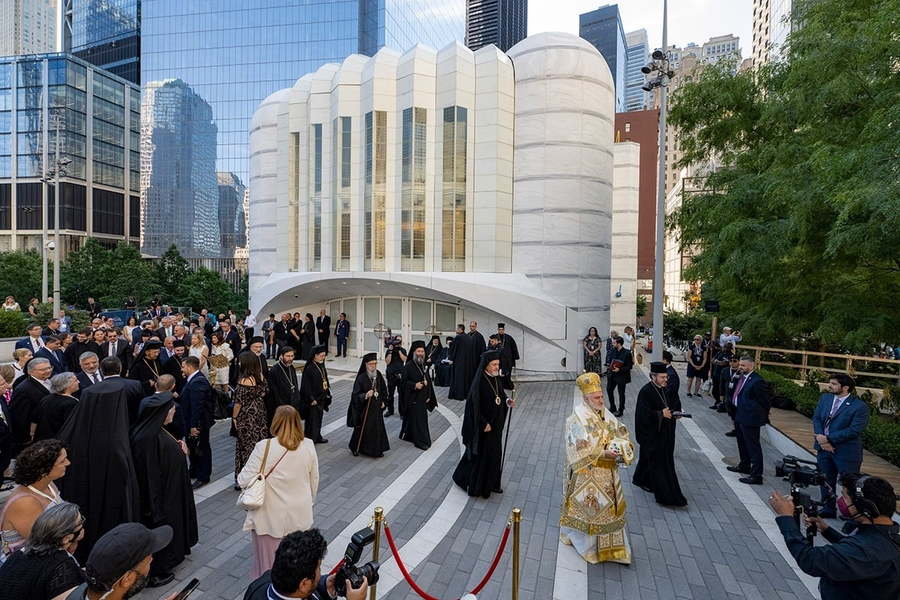 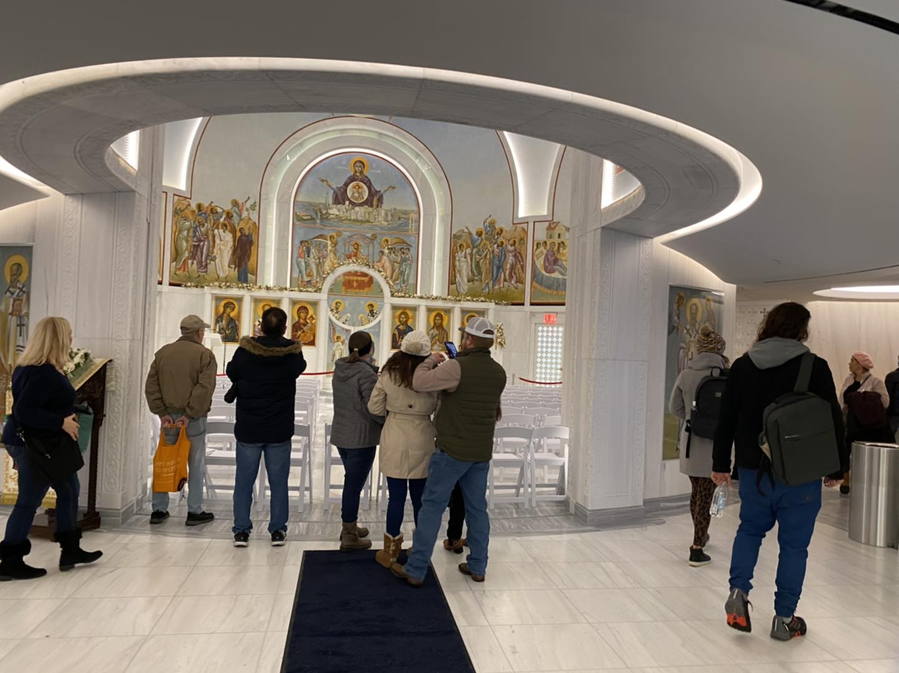 In addition to the worship spaces, the church also has two “community” rooms on the second and third floors, areas that are open to the public for meetings and other activities. Calatrava feels “these spaces are a significant component of the building’s program as they accentuate the church’s open and welcoming relationship with the greater World Trade Center Memorial site, as well as the community of Lower Manhattan.” 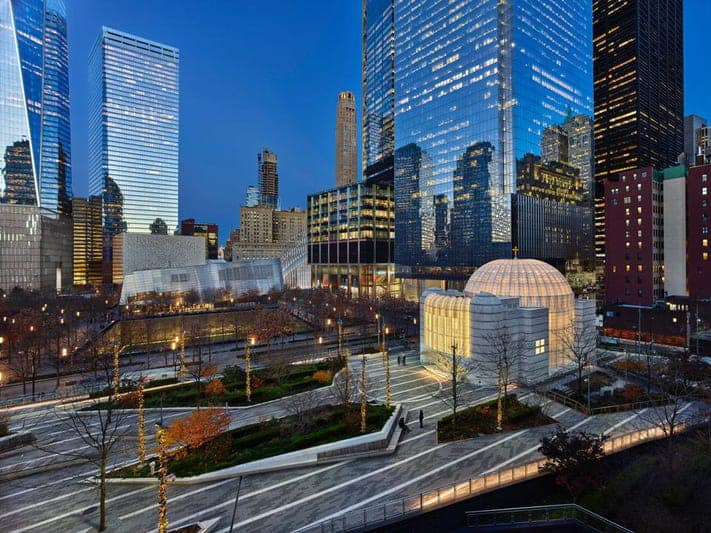 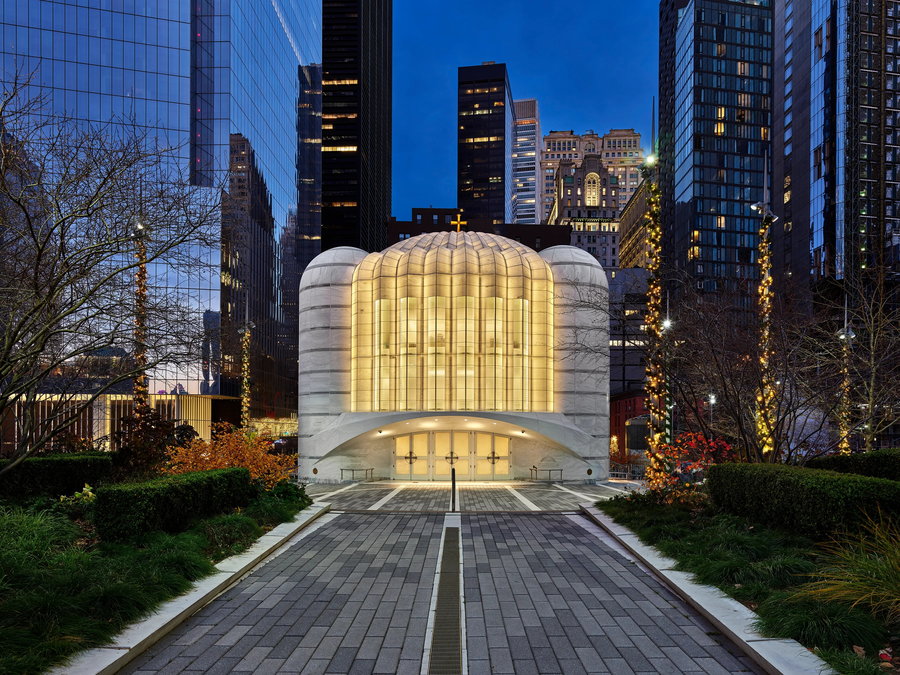 The church leaders are grateful to have their physical structure restored, but they’re even more excited for what its return symbolizes. “This Shrine will be a place for everyone who comes to the Sacred Ground at the World Trade Center, a place for them to imagine and envision a world where mercy is inevitable, reconciliation is desirable, and forgiveness is possible,” said His Eminence Archbishop Elpidophoros of America in a statement. “The National Shrine…will stand as witness not only to the vitality of Holy Orthodoxy, but for America’s commitment to religious freedom. The Shrine will be a defiant symbol of opposition to the forces or intolerance around the globe.”